Step Away from that Sandwich 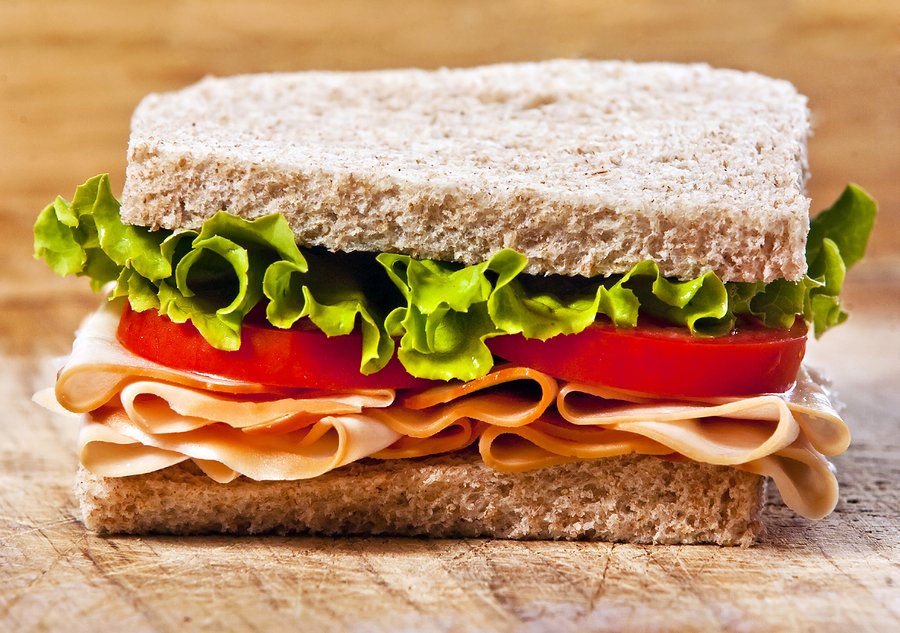 Whether you are grabbing a bite to eat at work or something on the run as you accomplish a few chores during the day, many of the available options are unhealthy and high in calories. But you already know that a fast food burger and fries, a couple of slices of pizza, a fried chicken and biscuits meal (most of the items we call lunch) are not going to cut it nutritionally, nor are they going to help our waistlines. So instead, you “wisely” pick up a simple deli sandwich or brown bag one from home. While on the surface this may seem like a much better choice, sadly, new research is proving that it may not be so after all.

The study, which was conducted by the United States Department of Agriculture (USDA) in Beltsville, Maryland, found that the sandwiches many of us eat for lunch are responsible for a good portion of the excessively high sodium levels in our diets, not to mention, a major source of calories.1 Melnick, Meredith. “Sorry, Your Sandwich Might Be Bad For Your Health.” Huffington Post. 10 October 2014. Accessed 12 October 2014. http://www.huffingtonpost.com/2014/10/10/sandwiches-sodium-health-salt_n_5948480.html The subjects were 10,000 adult participants in the 2009 and 2010 What We Eat in America food surveys, which are part of the broader National Health and Nutrition Examination Survey (NHANES). The scientists assessed the information collected for both the types of foods the volunteers had reported eating as well as for calorie counts, sodium content, and more.

Sandwiches were consumed on a daily basis–and sometimes more than once a day–by 49 percent of the subjects. It is because they are such a common choice that their contents have such an important dietary impact on us. The data showed that each sandwich we eat provide us with 20 percent of a day’s recommended sodium intake, on average. Since the typical American adult has a daily sodium intake of 3,436 milligrams according to the Centers for Disease Control and Prevention,2 “Americans Consume Too Much Sodium (Salt).” Centers for Disease Control and Prevention. 23 February 2011. Accessed 13 October 2014. http://www.cdc.gov/features/dssodium well above the recommended intake level of 1,500 mg, these midday meals may be a lot more detrimental than we ever thought.

It does make sense, however, when you think about the foods making up the majority of sandwiches we eat. An obscene 80 percent of the sodium we consume comes from processed food items such as prepackaged luncheon meats. Perdue turkey cold cuts, for example, pack a whopping 215 mg of sodium per super thin slice, so if you like a thicker sandwich you may end up in the vicinity of 1,000 mg of sodium in one meal–just from the meat. In addition to the amount of processed foods in our sandwiches, the other issue is the average portion size. The typical sandwich consumed by subjects offered more than 1,000 calories and approximately 1,700 to 1,800 mg of sodium. In other words, a part of the reason sandwiches have so much sodium is that they are just too darn big.

Beyond the sodium woes of our sandwiches, deli meats have been found numerous times to be bad for your health in general. A 2010 study at the Harvard School of Public Health in Boston determined that people who eat processed meats, including deli meats, have a 42 percent higher risk of developing heart disease and a 19 percent higher risk of being diagnosed with type 2 diabetes for each daily serving of just 1.8 ounces of meat.3 Micha, Renata; et al. “Red and Processed Meat Consumption and Risk of Incident Coronary Heart Disease, Stroke, and Diabetes Mellitus.” Circulation. 17 May 2010. Accessed 13 October 2014. http://circ.ahajournals.org/content/121/21/2271.abstract

The bottom line is that those sandwiches you’ve been eating every day at lunch have likely not been as good for you as you thought. If you really don’t want to give your sandwiches up, try to modify them to make healthier versions. Roast a chicken, ham, or turkey at home and set aside a bunch of slices to save for sandwich meat rather than buying a plastic package of processed meat. Don’t forget to cut back on portions too, paring them down to a more appropriate amount of food. Choose heartier types of bread such as a whole wheat or multigrain for fiber. And add vegetables to the sandwich such as spinach, tomatoes, bell pepper strips, or onion for flavor and extra nutrition. Just don’t start adding pickles to your sandwich, because just one medium dill pickle clocks in at over 800 mg of sodium.

Oh, and lest we forget, having your sandwich with a bag of chips or a side of potato salad, or even a green salad swimming in dressing is a non-starter.