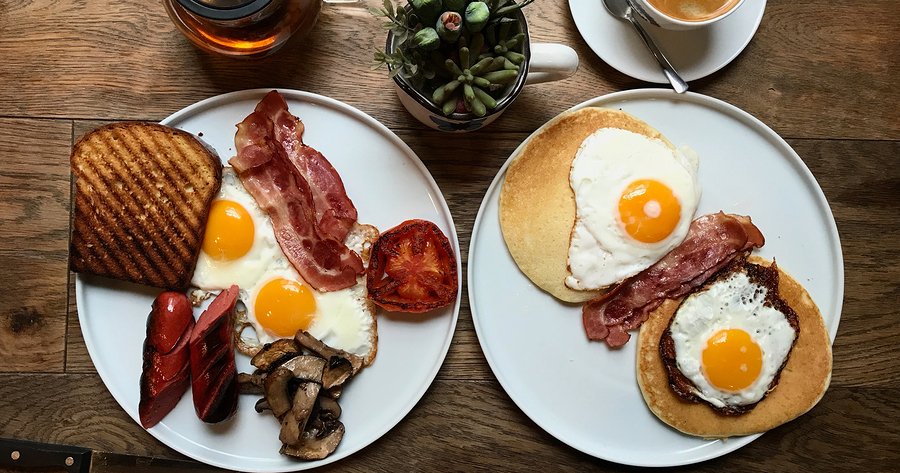 So, what about breakfast? Some nutritionists call it the most important meal of the day. A new study that we’re going to cover in some detail in a bit says that skipping breakfast almost doubles your risk of death from heart disease. And yet, we frequently talk about the importance of fasting–in which breakfast seems to absolutely be skipped. No, wonder the Foundation gets so many people writing in saying they’re confused. Well, we’re going to see if we can resolve that confusion today.

Why does breakfast have to be defined? Everybody knows what breakfast is–or do they? In fact, breakfast means vastly different things to different people and different cultures. For example:

You get the idea. There’s no such thing as a typical breakfast around the world. And it can be at any time of day 5-10 AM. And for those who work the night shift and sleep during the day, breakfast could be at 9:00 PM.

So, any study that deigns to make claims for breakfast needs to define what it means by breakfast. And unfortunately, most do not–leaving it vague or unspecified. And on that single point alone, they are rendered irrelevant. Which brings us to the study of the day.

Association of Skipping Breakfast with Cardiovascular and All-Cause Mortality 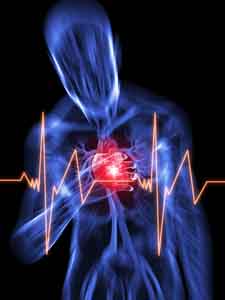 This was a prospective cohort study of a nationally representative sample of 6,550 adults 40 to 75 years of age who participated in the National Health and Nutrition Examination Survey III (NHANES3) from 1988 to 1994. The frequency of breakfast eating was reported during an in-house interview. Death and underlying causes of death were ascertained by linkage to death records through end of the year 2011. The associations between breakfast consumption frequency and cardiovascular and all-cause mortality were then investigated using statistical analysis. It should be noted that although the NHANES3 survey got granular in terms of exactly what people ate and when, that data was not incorporated into the current study. In fact, neither the nature of the breakfast consumed nor the timing of that breakfast was clearly defined in the current study. But even at that, in the NHANES3 survey, it was the participants themselves who determined whether or not to call what they ate for their first meal of the day “breakfast “–both in terms of “what ” they ate it and when they ate it.  Consider the evidence as noted in this extract from the survey’s Dietary Interviewers Manual.3 “NHANES-III DIETARYINTERVIEWER’S MANUAL.” September 1992. 4.3.12.1 p4-205. http://wwwn.cdc.gov/nchs/data/nhanes3/manuals/diet.pdf

“From midnight until (time of first meal code), you had nothing to eat or drink.”  Pause a moment for an affirmative response from the respondent, then begin the review of the SP’s intake aloud, for example, “At 7:00 in the morning [or whatever time the participant noted in their survey for their first meal] you ate breakfast at home. You had one slice of toast with butter, and decaffeinated coffee with Equal …”Continue this procedure until you have reviewed the complete recall. ”

Thus, in terms of the survey, coffee and donuts qualify as having breakfast equally as does yogurt and fruit or ham and eggs. But, and this is even more important, if two participants woke up, went to work, and didn’t have their first meal until noon, one might call that meal breakfast in the survey and the other lunch. Which means, although the behavior is identical, the survey results show one skipping breakfast and the other not. Now again, the survey got more granular in terms of exactly what was eaten and when, but the study did not consider that granularity–only whether the respondents said that they had breakfast or not. Can you see how this might make the study’s results somewhat dubious?

So, among the 6,550 participants in this study, 5.1% self-identified as never eating breakfast, 10.9% rarely ate breakfast, 25.0% ate breakfast some days, and 59.0% said they consumed breakfast every day (again, recognizing that both what was consumed and when for this self-defined breakfast was all over the map). Anyway, over the course of the study, 2,318 deaths occurred, including 619 deaths from cardiovascular disease. After adjustment for age, sex, race/ethnicity, socioeconomic status, dietary and lifestyle factors, body mass index, and cardiovascular risk factors, participants who never ate breakfast compared with those eating breakfast every day had hazard ratios of 1.87 for cardiovascular mortality and 1.19 for all-cause mortality. Or to put that into English: those skipping breakfast had an 87% higher risk of heart disease-related death and stroke-related death compared with people who had breakfast every day, but curiously, only a 19% greater risk of dying from any cause. 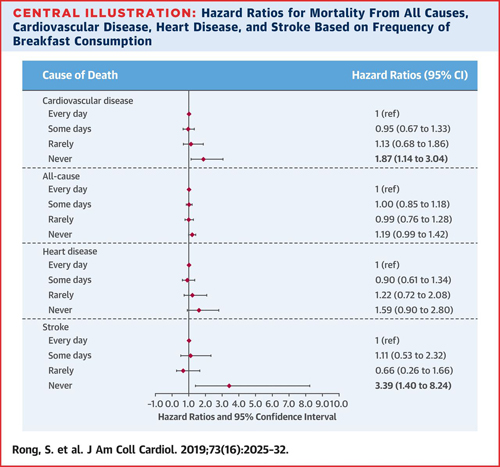 Unfortunately, it’s not that simple. According to Krista Varady, associate professor of nutrition at the University of Illinois, Chicago, who was not involved in the research, “The major issue [with the study] is that the subjects who regularly skipped breakfast also had the most unhealthy lifestyle habits. Specifically, these people were former smokers, heavy drinkers, physically inactive, and also had poor diet quality and low family income. ” All those factors put people at a much higher risk for cardiovascular disease. “I realize that the study attempted to control for these confounders, but I think it’s hard to tease apart breakfast skipping from their unhealthy lifestyle in general. “4 Jacqueline Howard. Skipping breakfast tied to higher risk of heart-related death, study finds.” CNN April 23, 2019. (Accessed 8 May 2019.) http://www.cnn.com/2019/04/22/health/skipping-breakfast-cardiovascular-death-study/index.html

And then there’s timed eating, currently a very popular form of intermittent fasting, that needs to be considered. Are those who skipped breakfast as a result of timed eating saying they skipped breakfast because they ate their first meal of the day at 10:00 AM, for example? But then, are they really skipping breakfast, or just eating it later. Remember, whenever they have it, it’s still the first meal of the day–the breaking of fast. Which brings us to…

Both are problematic for the survey. If you’re fasting every other day, for example, you would show up in the study as eating breakfast only on “some days. ” But not that many people use that form of intermittent fasting. As I mentioned earlier, the form of fasting that is now very hot with celebrities, athletes, and the public at large is number 2 above–16/8 time-restricted eating–in which you eat for eight hours every day and fast for 16. For most people, that means starting your fast around 6 PM, continuing while you sleep, and then through the early morning. Finally, you break your fast and begin your eight-hour cycle of eating at around 10 AM when your 16 hours of fasting are up–continuing to eat whatever you want for the next eight hours before starting the cycle again.

Although this type of fasting does not go on long enough to initiate intelligent autolysis or regenerate the immune system, it does produce two benefits that have made it extremely popular.

Anyway, depending on how you define it, eating your first food of the day at 10 AM means that, at least in the minds of many people, you’ve skipped breakfast and are into the no-man’s land between breakfast and lunch. But again, as we said earlier, it’s technically still breakfast because it’s the meal you’re using to break your fast.

So, How Does Intermittent Fasting Provide Its Health Benefits? 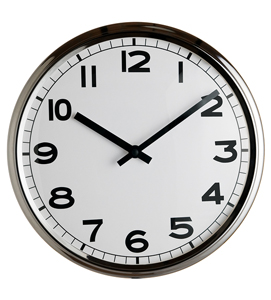 As we’ve already discussed, intermittent fasting will not rebuild your immune system–that takes a minimum of three days of consecutive fasting. And it won’t trigger intelligent autolysis, the most important benefit you can derive from fasting as that takes five to seven days of consecutive fasting. Nevertheless, it provides a whole range of lesser but still important health benefits, two of which we’ve already mentioned. Let’s look at those benefits in a little more detail.

Truth be told, this is often the primary reason people decide to give any form of intermittent fasting a try. And there is a great deal of research that indicates they will not be disappointed since intermittent fasting is quite effective in this regard. Essentially, it provides the same efficacy as calorie restriction,9 Trepanowski JF, Kroeger CM, Barnosky A, et al. “Effect of Alternate-Day Fasting on Weight Loss, Weight Maintenance, and Cardioprotection Among Metabolically Healthy Obese Adults: A Randomized Clinical Trial.” JAMA Intern Med. 2017;177(7):930–938. http://jamanetwork.com/journals/jamainternalmedicine/fullarticle/2623528 but with two important extra benefits.

So, exactly how does intermittent fasting, regardless of how it’s implemented, help you lose weight. Well, obviously, by virtue of the extended periods of non-eating, you tend to eat fewer calories, but there’s another equally important factor. When you’re not consuming food, your insulin and blood glucose levels drop. Do that for long enough–as happens during your fasting periods–and the reduced levels of insulin trigger your cells to release their glucose stores to provide energy. And burning up your glucose stores on a regular basis leads to weight loss.

High blood levels of insulin and glucose are known risk factors for diabetes. But, as we’ve discussed, intermittent fasting will lower your blood glucose levels as well as your fasting insulin levels and insulin resistance, thus lowering your risk of diabetes. It should be noted that time restricted eating is likely to prove superior in this regard as alternate day fasting is more likely to stimulate appetite and encourage binge eating on food days, which forces pancreatic cells to work harder on those days. 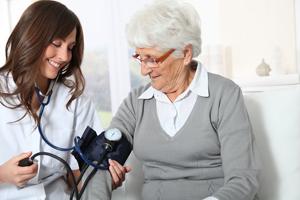 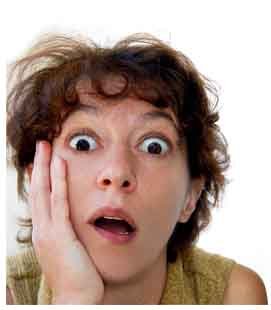 So, what have we learned?

So, what is a healthy breakfast (at whatever time you choose to eat it)? Well, if you’re inclined to “breakfast ” types of food, then:

Also, it’s worth remembering, nothing but convention says that breakfast needs to look like breakfast–as people in many countries around the world can tell you.

By the way, if you’re curious as to what I eat for breakfast and when:

So, there you go. Everything you ever wanted to know about breakfast–and probably a whole lot more. 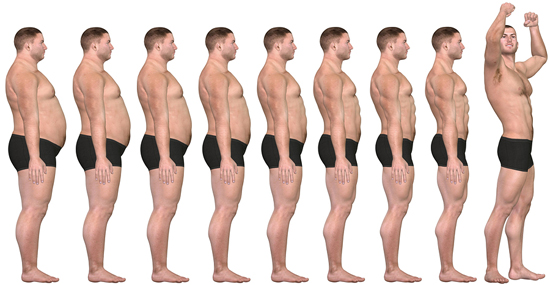