Fried Foods More Fattening For Some 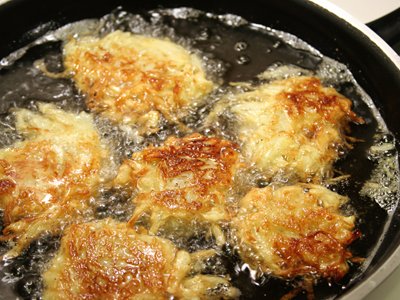 Ever wonder how it is that you can go out to lunch with your skinny pal and eat the same fried chicken basket, yet she won’t gain an ounce while you can practically feel every calorie transferring straight from your mouth to your hips? The answer may very well lie in your genes. According to new research, some of us may be genetically programmed to be more sensitive than others to weight gain from consuming fried items.

The study, which took place at the Harvard School of Public Health in Boston, Massachusetts, found that individuals who have a genetically increased risk of becoming obese put on more pounds after indulging in fried foods than did their peers who have a lower genetic obesity risk.1 Doucleff, Michaeleen. “French-Fry Conspiracy: Genes Can Make Fried Foods More Fattening.” NPR. 20 March 2014. Accessed 26 March 2014. http://www.npr.org/blogs/thesalt/2014/03/20/291412227/french-fry-conspiracy-genes-can-make-fried-foods-more-fattening The subjects were nearly 30,000 men and women living around the United States. The scientists assessed their regular eating habits as well as the genetic risk for obesity of each participant. Genetic risk was determined by evaluating 32 genes that had previously been identified as having an association with obesity.

Not surprisingly, all of the people who reported dining on fried foods more frequently tended to gain more weight than did their peers who ate less of it. But the amount of excess weight was mitigated in some cases by the number of obesity risk genes the person carried. The study determined that those who consumed fried foods at least four times a week had an average increase of two more body mass index points when they had 10 of the obesity-related genes. Interestingly, though, those individuals who would consume fried foods at least four times a week but had no obesity genes were found to only have a single extra BMI point. Now, one BMI point represents 5 lbs give or take, depending on your height. So that one point difference between the no-gene group and those with the 10 obesity-related genes might mean the distinction between being in a normal weight range and overweight, or crossing the line from being overweight to becoming obese.

The study was not designed to prove cause and effect. Therefore, it is possible that the fried foods were not the culprit responsible for elevated BMIs. However, it seems fairly obvious that they were likely a considerable factor in the weight gain, but probably one of many. It certainly wouldn’t be a huge leap to suggest that those people who eat fried foods four times a week on a regular basis may have other poor lifestyle habits. Chances are, fried items aren’t their only weakness and they consume other calorie-laden junk food as well. And, since exercise would help rein in escalating BMIs, it may be safe to assume that they are not getting nearly enough physical activity either.

And speaking of other poor lifestyle habits, a 2012 study by the same scientists found that the consumption of sugary drinks every day resulted in a BMI increase of approximately 1.8 points in people with 10 obesity genes.2 Qi, Qibin, et al. “Sugar-Sweetened Beverages and Genetic Risk of Obesity.” New England Journal of Medicine. 11 October 2012. Accessed 28 March 2014. http://www.ncbi.nlm.nih.gov/pmc/articles/PMC3518794 However, in the subjects not carrying any obesity genes, the effect on BMI of drinking juice or soda daily was cut almost in half.

But the bottom line is that none of us–obesity gene carriers or not–should be eating fried foods or sugary drinks multiple times a week. There is no need to find out how many genes you have inherited that may increase your chances of ending up overweight because, truly, an unhealthy diet will take its toll on anyone after a while. Even healthy foods such as fish promote weight gain and increase stroke risk when they have been fried. So if French fries and crispy chicken are a favorite meal, just make it a very occasional indulgence. When you are eating nutritiously most of the time and exercising every day, a once-in-a-blue-moon treat won’t have nearly so much influence on your health or your waistline. And who knows…as you become accustomed to eating fresher, less greasy, less sugary, more natural foods, your tastes may change for the better.