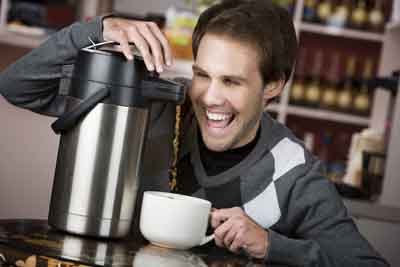 Is caffeine saint or sinner, miracle drug or prenatal nightmare? In truth, it’s all of the above. The devil, as usual when it comes to natural substances, lies in the details.

Caffeine — it’s the world’s most popular drug. People drink it with alcohol to ramp up the effect. They drink it after alcohol to sober up. They take it to get rid of headaches, cure cancer, and prevent Parkinson’s. Then again, the state of California is looking to put warning labels on any product that contains added caffeine. So what gives — is caffeine saint or sinner, miracle drug or prenatal nightmare?

In truth, it’s all of the above. The devil, as usual when it comes to natural substances, lies in the details. And that’s what we’re going to explore in this newsletter, the truth behind caffeine.

The world’s most popular drug

Pure caffeine is a bitter-tasting white powder that looks a lot like cornstarch. It is moderately soluble in water at body temperature and readily soluble in boiling water. It was first isolated from coffee in 1820, after which it was quickly recognized that the mood-and-behavior-altering properties of both coffee and tea depended upon caffeine. Whether it’s in the form of coffee, tea, chocolate, kola nut chewables, guarana, or yerba matte, hundreds of millions of people around the world start their days (including 90% of Americans) — each and every day — with a jolt of caffeine or use a jolt during the day to keep them “going.” And yet, almost no one who consumes it knows much about it. As a point of clarification, not all forms of caffeine are the same. Depending on what other alkaloids and antioxidants come with it or how it’s bound with fiber, the “caffeine experience” can be quite different from beverage to beverage. Each caffeine complex actually has a different name depending on its source such as guaranine as found in guarana, mateine as found in mate, and theine as found in tea, Another point of distinction is that not all caffeine is actually caffeine. Chocolate, for example, contains theobromine, a very close relative of caffeine — but only 1/10 as stimulating.

Although caffeine is not addictive in the same sense that many hard drugs can be considered addictive, it definitely affects the brain and body and stimulates them in a manner similar to the amphetamines such as cocaine. They all work by blocking adenosine’s ability to slow nerve cell activity in preparation for sleep, and instead increase the speed of nerve cell activity and of the neuron firing in the brain. (The caffeine molecule is structurally similar to adenosine, and binds to adenosine receptors on the surface of cells without activating them — an “antagonist” mechanism of action.) And if this were not enough by itself to keep you awake, the increased neuron firing in the brain causes the pituitary glands to release hormones that tell the adrenal glands to produce adrenaline, which gives your body a boost, so it can remain active and alert.

Another effect of blocking adenosine is that it causes blood vessels in the brain to constrict, which also serves to prevent the brain and body from sleeping. (As a side note, it’s probably worth mentioning that the ability of caffeine to close blood vessels in the brain is why many pain relievers contain caffeine. If you have a vascular headache, the caffeine in Anacin, for example, will shut down the blood vessels, thus easing the pain.) And finally, both caffeine and cocaine increase dopamine production in the brain, so you experience a temporary “high.” Dopamine is a neurotransmitter that activates “pleasure centers” in the brain, and quite simply makes you feel “good.” Naturally, the pleasurable effect produced by dopamine manipulation plays a major role in caffeine addiction.

And speaking of addiction, as I mentioned in the last paragraph, caffeine is not an addictive drug in the same sense as cocaine and/or heroin. Nevertheless, because of caffeine’s role as an adenosine antagonist, anyone who consumes as little as 300 mg of caffeine a day (the equivalent of just 3 cups of drip coffee) will suffer withdrawal symptoms if they abruptly cut off their caffeine supply. The problem is that the bodies of individuals who regularly consume caffeine adapt to the continual presence of the drug by substantially increasing the number of adenosine receptors in the central nervous system in an attempt to compensate. This is known as the “tolerance effect.” This makes the body much more sensitive to adenosine — and consequently less sensitive to caffeine. In effect, this forces you to consume more and more caffeine over time to get the same stimulatory effect. On the other hand, any reduction in caffeine intake will effectively increase the normal physiological effects of adenosine because of the increased number of receptor sites, resulting in unwelcome withdrawal symptoms including fatigue, depression, irritability, tremors, jumpiness, not to mention deprivation of deep sleep, and, of course, headaches, as the blood vessels in the brain begin to once again dilate.

Thanks to the popularity of energy drinks, caffeine is now omnipresent, but its level of concentration can vary widely. A piece of chocolate may contain as little as 5mg, whereas some energy drinks may contain as much as 160 mg. And for that matter, some medications and diet pills can run as high as 200 mg of caffeine. Buzz city!!!

One of the major problems with caffeine is that it can severely impact sleep patterns. Yes, if you have a morning cup of coffee, 75% of it will clear your body by the time you go to bed. But if you have a couple of cups of drip coffee in the morning, that means you will still be going to sleep with some 50 mg still percolating in your veins — more than enough to disrupt the depth and quality of your sleep. And if you drink coffee throughout the day, or as an afternoon pick-me-up, the level in your blood at bedtime will climb dramatically. So while, yes, you may yet fall asleep, it is likely the quality of that sleep will not be up to par.

Another problem is that caffeine is a diuretic and can dehydrate you. Some experts claim that the fluid you consume in drinking coffee or energy drinks more than compensates for the fluid you lose through extra urination, but the facts don’t bear that out. Claims to the contrary are based on erroneous studies on dehydration and misleading sound bites.

Caffeine and alcohol don’t mix — either while drinking, or for sobering up after drinking. The problem is that caffeine is a stimulant, whereas alcohol is a depressant — complete opposites. That means that caffeine doesn’t negate the effects of alcohol; it only makes you “think” it does. Consuming caffeine creates the impression that you’re getting sharper and more sober. But the truth is your reaction time and judgment are still impaired. Mixing alcohol and caffeine make you more likely to have accidents — either in your car or while operating heavy machinery.

There is also the problem that there are at least 32 epidemiological studies of caffeine that have found an increased risk of adverse developmental or reproductive outcomes. To put that in layman’s terms, studies have linked caffeine to both lowered birth weight and a significant increase in birth defects.

And caffeine is a growing problem for kids. The consumption of soft drinks by children has literally doubled in the past 35 years, with soda replacing milk. A 2003 study of Columbus, Ohio middle schoolers found some taking in an astounding 800 milligrams of caffeine a day — more than twice the recommended maximum for adults of 300 milligrams. And that was in 2003, before the energy drink craze hit full bore. With the advent of energy drinks in the last five years, those numbers have only grown.

So how much caffeine is too much?

According to the Mayo Clinic, for most adults, moderate doses of caffeine — 200 to 300 milligrams (mg), or about two to four cups of brewed coffee a day — aren’t harmful. But heavy use — more than 500 to 600 mg a day, or about four to seven cups of coffee — can cause a whole host of problems, including:

Caffeine and the law

There’s a popular song from the last 40 years that goes, “I fought the law, and the law won.” When it comes to caffeine and caffeinated drinks, that may turn out to be remarkably prescient. A couple of years ago, the State of California announced that state environmental health officials were considering whether or not the caffeine found in soda and energy drinks was harmful to your health, especially for pregnant women. In addition, the California Office of Environmental Health Hazard Assessment is considering placing warning labels on caffeine enhanced drinks if California Health Officials actually conclude that caffeine is a harmful substance.

And if that were not enough, the State of Utah announced earlier this month that they are considering taxing caffeine as a new stream of revenue for the state.

Make no mistake — whether either of these initiatives ever goes live or not is irrelevant. The bottom line is that caffeine is now in legislative crosshairs around the world. Europe already requires a warning label on high caffeine energy drinks, and France actually has banned Red Bull.

So much for the negatives. Caffeine also has a bright side. At least six studies have shown that people who drink coffee on a regular basis are up to 80% less likely to develop Parkinson’s, with three studies showing the more they drink, the lower the risk. Other research has shown that drinking coffee can reduce the risk of colon and liver cancer by some 25%, slash the risk of skin cancer by some 40%, drop the risk of liver cirrhosis by 22%, and lower the risk of gallstones by nearly half.

Coffee might even offset some of the damage caused by other vices. Some research indicates that people who smoke and are heavy drinkers have less heart disease and liver damage when they regularly consume large amounts of coffee compared to those who don’t.

There’s also some evidence that coffee may help manage asthma and even control attacks when medication is unavailable, stop a headache, boost mood, and even prevent cavities.

And of course, caffeine is widely used for its stimulating and alertness properties, as well as its ability to enhance athletic performance.

Note: not all of the benefits associated with drinking coffee or tea can necessarily be attributed to caffeine. In many cases, they might be specific to the antioxidants found in those beverages (see below).

So, caffeine yes — caffeine no?

As I mentioned at the top of the newsletter, when it comes to caffeine, the devil is in the details. With that in mind, let me offer my recommendations.

Incidentally, one of the reasons for this newsletter is that this past month has been Caffeine Awareness Month. And speaking of caffeine awareness, check out the caffeine calculator at CaffeineAwareness.org, which will calculate how much caffeine you personally are consuming each day.