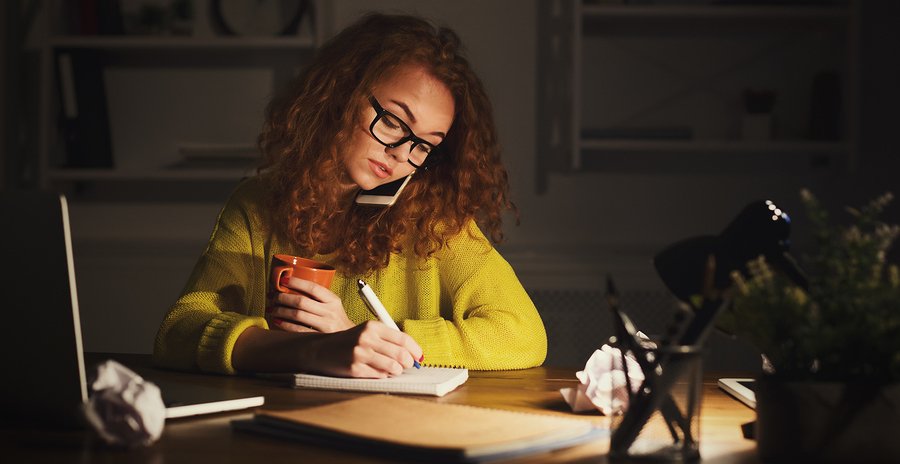 In today’s competitive work culture, you may feel that it is important to show yourself to be extra dedicated to get ahead in your company. That often means working longer hours, well above the standard 40-hour workweek, because employees who leave right at 5 pm are considered clock watchers who don’t give it their all. If that’s the ethos at your workplace, new research suggests that it could end up seriously affecting your health, but only if you are a woman.

The study, which took place at the Institute for Work and Health in Toronto, Canada, found that women who typically work 45 hours a week or more are at an increased risk for developing type 2 diabetes compared to their peers who limit their work to between 35 and 40 hours a week.1 Gilbert-Ouimet, Mahee; et al. “Adverse effect of long work hours on incident diabetes in 7065 Ontario workers followed for 12 years.” BMJ Open Diabetes Research & Care. 2 July 2018. Accessed 8 July 2018. http://drc.bmj.com/content/6/1/e000496.info. Both men and women were included in the investigation, which was based on 7,065 employed adults living in the Ontario, Canada area. The subjects ranged in age from 35 to 74 years old, and they were tracked for a period of approximately 12 years.

After answering surveys that asked for information on topics such as the number of hours they generally spend at work each week, the participants’ medical records were evaluated. Over the course of the study, roughly 10 percent of the volunteers were diagnosed with diabetes. When broken down by gender, the difference in working overtime hours was quite surprising. The work hours of men had no bearing on their diabetes risk, while women who worked 45 hours or more were shown to have at least a 50 percent higher risk of developing diabetes.

The researchers controlled for a wide variety of potentially influential factors like age, marital status, ethnic background, weight, pre-existing health problems, whether subjects engaged in shift work, and how active or sedentary a job was. The results held steady even after these factors were considered.

Although the study was not designed to prove cause and effect, it certainly did demonstrate a significant connection between a woman’s long hours at work and an elevated risk of diabetes. And while it did not explain how working overtime might affect diabetes risk, there may be a few different elements at play.

For one thing, there may be a gender-specific influence that pertains mainly to women. A 2017 study at the University of Alberta in Edmonton, Canada found that even when employed full-time, women still do the bulk of the housekeeping and childrearing jobs at home.2 Horne, Rebecca M.; et al. “Time, Money, or Gender? Predictors of the Division of Household Labour Across Life Stages.” Sex Roles. 26 September 2017. Accessed 9 July 2018. http://link.springer.com/article/10.1007%2Fs11199-017-0832-1.
These added responsibilities on top of long work hours might contribute to a chronic state of stress and set the stage for diabetes.

Since it is not exactly realistic for most of us to just quit our jobs, what’s a woman to do to prevent diabetes? You can start by taking every opportunity to be active during the workday. Walk laps around your building, use the stairs as much as possible, and make time for a workout at lunch. Take your lunch break to eat a healthy meal in a relaxed atmosphere or to immerse yourself in a de-stressing activity like meditation.

If you feel overwhelmed with responsibilities at home on top of your job, have a conversation with your significant other about spreading chore distribution a little more equitably. Invest in a cleaning service or supermarket delivery if you can fit them in your budget to take something off your plate. And sticking to a healthy lifestyle of good nutritional habits, daily exercise, and stress-relief techniques can help you lower your risk of conditions like diabetes even if you sometimes need to log extra hours at work.