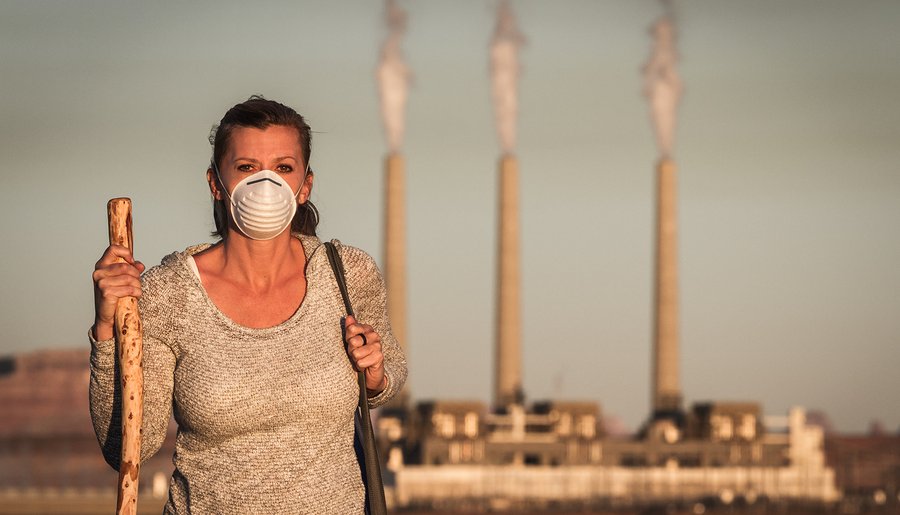 You may not be part of the one percent, but there’s at least some chance that you’re part of the lucky eight percent. That’s the eight percent of the world’s population living in areas not so polluted that air quality is below the minimal acceptable standards established by the World Health Organization. You read that right: 92 percent of the world’s population lives in places where the air quality exceeds WHO limits for pollution.1 “WHO releases country estimates on air pollution exposure and health impact.” 27 September 2016. World Health Organization. 23 October 2016. http://www.who.int/mediacentre/news/releases/2016/air-pollution-estimates/en/ And WHO says that’s a conservative estimate. Talk about shockers!

A report on the subject issued by WHO includes a world map showing locations of the most polluted areas on earth. The worst places are congregated in Asia, Africa, and the Middle East, with the worst of the worst in African locations such as Okitsha, Nigeria, where pollution exceeds that in Bismark, North Dakota, by more than 7000 percent. Also, surprisingly, high-income parts of the Middle East make it to the utterly abysmal list. In parts of Bahrain, for instance, particulate matter can exceed levels in Los Angeles by 1500 percent. In general, though, the health impacts are the greatest in the low-income, third-world regions, where 88 percent of the deaths resulting from pollution occur.2 “Ambient Air Quality and Health.” September 2016. World Health Organization. 26 October 2016. http://www.who.int/mediacentre/factsheets/fs313/en/

The WHO limits for clean air restrict particulate matter to no more than 10 micrograms per cubic meter for the smallest particles. That figure does not mean that the air is healthy at 10 micrograms per cubic meter; it merely means it’s acceptable by WHO standards. Truly healthy air might have a much lower measurement, meaning that if you live, say in Oklahoma City where the PM is 9, you are probably still getting a dose of toxins with each breath. That said, most places in the US are under the WHO limit, with notable exceptions in California and industrial regions. But even in the most polluted areas of the US—say Visalia, California, where PM2.5 pollution measures a dismal 18, nearly twice the WHO limit, there’s no comparison to Kampala, Uganda, where the measurement is 104, or Gwalior, India, at 176.

To get accurate measurements of particulate matter, the WHO established monitoring stations in 3000 urban and rural locations across the globe, also using information collected by satellite. The research focused on measuring particulate matter of less than 2.5 micrometers in diameter (about 3% the diameter of a human hair), which is especially dangerous as the smaller the particulate, the longer it lingers in the atmosphere and the more easily it enters the bloodstream and lodges in organs. Substances measured included sulfates, nitrates, ammonia, sodium chloride, black carbon, and dust from minerals in each location.3 Kennedy, Merrit. “92 Percent of the World’s Population Breathes Substandard Air, WHO Says.” 27 September 2016. The Two-Way NPR. 25 October 2016. http://www.npr.org/sections/thetwo-way/2016/09/27/495654086/who-says-92-percent-of-the-worlds-population-breathes-sub-standard-air The study did not measure certain known pollutants such as ozone and nitrogen oxides, nor did it measure indoor air pollution, which is why WHO admits the estimates are conservative.

The results of all this pollution are disastrous, with at least three million deaths occurring annually as a direct result. Add the fatalities resulting from indoor air pollution and that number goes up to 6.5 million, accounting for 11.5 percent of all deaths each year. The WHO reports that 72 percent of the deaths from outdoor air pollution were from ischaemic heart disease and strokes, with 14 percent due to chronic obstructive pulmonary disease (COPD) or acute lower respiratory infections, and the final 14 percent due to lung cancer. Also, many, many more can suffer from these conditions without dying, meaning that in addition to all the deaths, there are abundant chronic health problems caused by dirty air. 4“Ambient air pollution: A global assessment of exposure and burden of disease.” 2016. World Health Organization. 26 October 2016. http://apps.who.int/iris/bitstream/10665/250141/1/9789241511353-eng.pdf?ua=1

Again, these numbers may be conservative. A new report just came out this week indicating that the link between air pollution and cardiovascular disease may be far more profound than previously believed. Scientists already knew that exposure to pollution particles could worsen existing heart disease, but new research out of Brigham Young University indicates that such exposure can cause inflammation as well as change immune cells in young people, creating optimal conditions for the development of heart disease later on in life.5 Doyle, Kathryn. “Pollution particles damage blood vessels, may lead to heart disease.” 26 October 2016. Reuters. 26 October 2016. http://www.reuters.com/article/us-health-cardiovascular-pm2-5-pollution-idUSKCN12Q2LM?feedType=RSS&feedName=healthNews&utm_source=feedburner&utm_medium=feed&utm_campaign=Feed%3A+reuters%2FhealthNews+%28Reuters+Health+News%29

Where does the outdoor pollution come from? WHO blames “inefficient modes of transport, household fuel and waste burning, coal-fired power plants, and industrial activities.” There’s also pollution coming from natural sources, such as dust in desert areas. Much of the worst of the pollution comes from omnipresent coal and dung-burning in certain parts of the world, such as in China, which leads the world in deaths due to poor air quality, followed by India and then Russia. In China, scientists estimate that 40 percent of annual deaths from outdoor pollution are directly attributable to coal fumes.

Do remember, too, that indoor pollution is at least as toxic and health destroying as outdoor pollution, causing even more deaths. In developing countries, much of that risk comes from indoor fires burning solid fuels such as cow dung or coal. In the developed world, the risk comes from product off-gassing and household chemicals as well as the buildup of radon gas in high tech, energy efficient houses.

The bottom line for you is that it’s essential to remember to do a full-body detox regularly. You may be eating right and exercising, but chances are good that if you’re still breathing, you’re inhaling troublesome particles that you need to expel from your body for optimal health.