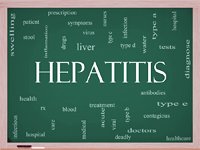 Jolene Mapes writes: Jerry Mapes was an athlete. A good athlete, one who still holds the shot put and discus record at Pryor High School for more than 30 years. He was big and strong, after all he was a Marine, a veteran of the Vietnam War. He was also the son of a major league baseball player, not just any baseball player, but the son of Cliff Mapes, a Yankee right fielder who played with guys like Mantle, DiMaggio and Yogi Berra. But in 1992, Jerry was diagnosed with the Hepatitis C virus, just like a large percentage of other Vietnam vets, and it turned his life upside down.

In 1988, I married Jolene. It was the happiest time of my life, and I looked forward to many wonderful years with my best friend and life partner. But, soon after we were married, something began to go wrong.

At first, it was hard to describe. I had no energy, no drive. It took an effort just to make it through the day, and it went on and on, day after day; it never let up. I went to doctors, and they ran test after test, but could find nothing wrong. I felt so helpless. I found myself asking. Can love be like this? Over the next couple of years, the symptoms got worse. I was even more tired. My stomach hurt, I had cramps in my colon, and my muscles hurt all the time. Still, the doctors could find nothing wrong. I would lie in bed, anticipating the birth of our first grandchild and wake up in a cold sweat and wonder what was wrong with me. I had been healthy all my life, sickness was something that happened to other people, not to me. I felt so helpless. 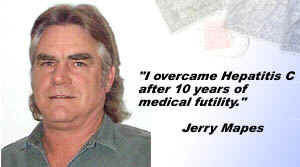 In 1992 after more testing, our family doctor saw a shadow on the x-ray of my liver. He immediately sent me to a specialist for a biopsy. The specialist diagnosed me with Hepatitis C. He said they had not been able to detect the Hepatitis C virus until recently. My liver enzyme activity level was 256 (normal being a fraction of that) the disease had so broken me that the quality of my life was at best 25% of what it had been. Little did I realize that I would soon look back on those as the good days. The specialist recommended that I go on a six-month Interferon injection program. I drove to Tulsa and went to the doctor every two weeks for blood tests during this six months, the specialist informed me that my liver enzyme activity level had dipped to 225. Two weeks after the final injection, I returned for another blood test, and my activity had gone back up to 256.

You need to understand that the Interferon program is not fun. I took six to nine injections a week, and each injection is devastating. While on the program. I NEVER had a good day. First of all, it felt like the Hepatitis C symptoms only worse; more intense. In addition, every injection made my muscles incredibly sore. I could no longer wear jeans because the pressure on my thighs was agony. I could no longer hug my wife and kids; it was too painful. I would have days when I felt like I wanted to die and get it over with. I was so depressed I would just sit and stare at the walls. Yet, at the end of it all, it had accomplished nothing.

My specialist wanted to double the dosage of Interferon, but because the side effects of the treatment had been so physically and mentally devastating (and the results so negligible) I decided…..NO! He told me that because the disease had progressed so far in my body, that not to treat it would be fatal. He said that the Interferon was the only thing that would help.

I felt like I was on Death Row. The bottom line for me, though, was that the minimal quality of life I had, living with the virus—was better than the agonizingly miserable quality of life I got from the Interferon injections. I decided to walk away from the doctors, and deal with it as best I could.

In 1994 after 13 years of employment with the Municipal Utility Board, I had to take early retirement. The Hepatitis C was making me so ill I couldn’t effectively carry out my responsibilities at work—to the point where it was compromising the safety of the employees who worked under me. Marcel Hudson introduced us to the Baseline of Heatlh program in February 1999. I had just read the information and thought it made since to use these supplements. I never even considered they would effect my virus in such a positive way. I started using the Echinacea Plus (Immunify), Mega Garlic (Super ViraGon), and Catalyst Altered Trace Minerals. At that time, the whole Baseline of Health was not yet available so I used what I could. Within a month, I noticed that I hadn’t been sick. You need to understand how remarkable this was, because for a number of months, I had been constantly sick. Sickness, in fact, had become a normal part of my life. I decided to go to the doctor to find out why I felt so good. The doctors ran another blood test and my enzyme activity was still at 256. I still had the Hepatitis C, but somehow, the Baseline of Health products I had been taking were suppressing the adverse effects of the virus.

When the full Baseline of Health program became available later that month and upon reading “Lessons From the Miracle Doctors” I understood, and knew I had to treat my body as a whole. When the Liver and Blood Detox program came out, I did a Colon Detox for the second time and the next week did the complete Liver Cleanse and Blood Detox. I had what’s called a cleansing reaction and felt pretty bad for a couple of days—but the Detox worked. In November of 1999, my enzyme activity level had dropped to 245. My doctor said he didn’t understand what I was doing, but it was working so to keep it up. I went through the whole detox program (colon and liver) again in January 2000 and in March had another blood test. My activity level was down to 179! My doctor asked me. “Now, tell me again, what is it you’re doing?” You see, not only was my liver enzyme count going down dramatically, but also my Triglycerides had plummeted from 218 to 98. I told him everything I was doing. He was totally amazed. I am writing this with tears in my eyes. This is a miracle!

My last visit to our family doctor was great. The liver enzyme count is still going down and he said all the results from my check ups are going in reverse, and in the ranges of a young healthy man, not someone in their 50’s that has suffered with Hepatitis C.

Our oldest of 3 grandchildren, the one I was praying to stay alive long enough to see him born is now 9 and I got to see him play his first football game a couple of weeks ago. A month ago, our youngest granddaughter had a dad’s day at her school. Her father was unavailable so I got to play all the games with her, relay races etc. we won of course.

The medical bills and the Interferon program cost between nine and ten thousand dollars. For a small fraction of the price, the Baseline of Health products and program produced results where medical science had failed. We thank God every day for leading us to this program. I owe my life to Jon Barron and the Baseline of Health program and will spend the rest of my life helping others take back their health the way I did.

If you know someone who has experienced similar circumstances, you must look into this. You’ll be glad you did!