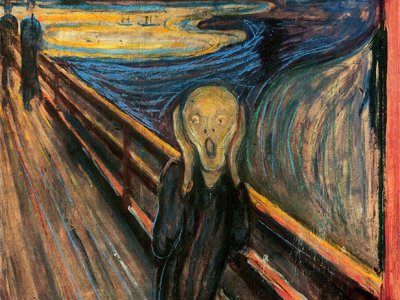 The maleficent, monger-miners of morbidity are at it yet again, looking to whip people into a frenzy of fear and spread misinformation in the name of the CDC. In case you haven’t seen it, there have been an abundance of headlines over the last couple of days saying things like:

And although the CDC report literally says that, it doesn’t actually mean that. The statement is taken out of context. I encourage you to read the actual report and not just the stories about it.2 “Estimating the Future Number of Cases in the Ebola Epidemic — Liberia and Sierra Leone, 2014–2015.” CDC Morbidity and Mortality Weekly Report (MMWR). Early Release September 23, 2014 / 63(Early Release);1-14. http://www.cdc.gov/mmwr/preview/mmwrhtml/su63e0923a1.htm?s_cid=su63e0923a1_w?s_cid=cdc_homepage_whatsnew_002 But if you don’t have the time, let me explain what the report actually says.

First, this is not an actual prediction; it’s the presentation of two different scenarios based on an Ebola Response modeling tool developed by the CDC. The 1.4 million figure represents one scenario. To quote from the report.

“Extrapolating trends to January 20, 2015, without additional interventions or changes in community behavior (e.g., notable reductions in unsafe burial practices), the model also estimates that Liberia and Sierra Leone will have approximately 550,000 Ebola cases (1.4 million when corrected for underreporting).”

However, the second scenario in the report states:

“If, by late December 2014, approximately 70% of patients were placed either in ETUs or home or in a community setting such that there is a reduced risk for disease transmission (including safe burial when needed), then the epidemic in both countries would almost be ended by January 20, 2015.”

In other words, if you weren’t into fear mongering, you could just as easily have run a headline based on this report that read:

CDC report predicts Ebola will be over by January

So which scenario is more likely? Well, the last three sentences in the report clearly state the opinion of the researchers themselves.

“Officials have developed a plan to rapidly increase ETU capacities and also are developing innovative methods that can be quickly scaled up to isolate patients in non-ETU settings in a way that can help disrupt Ebola transmission in communities. The U.S. government and international organizations recently announced commitments to support these measures. As these measures are rapidly implemented and sustained, the higher projections presented in this report become very unlikely.“

Unfortunately, many news services have decided to transform into fear-mongering the CDC’s express effort to motivate the international community.  As the Washington Post pointed out in its version of the story, CDC Director Tom Frieden, commenting on the report, said, “This presents a what-if case — the nightmare scenario if nothing is done.”  He added, “It is still possible to reverse the epidemic, and we believe this can be done if a sufficient number of all patients are effectively isolated, either in Ebola treatment units or in other settings, such as community-based or home care. Once a sufficient number of Ebola patients are isolated, cases will decline very rapidly — almost as rapidly as they rose.”3Lena H. Sun, ,Brady Dennis and Joel Achenbach. “CDC: Ebola could infect 1.4 million in Liberia and Sierra Leone by end of January.” The Washington Post. September 23. (Accessed 23 Sep 2014.) http://www.washingtonpost.com/national/health-science/cdc-ebola-could-infect-14-million-in-west-africa-by-end-of-january-if-trends-continue/2014/09/23/fc260920-4317-11e4-9a15-137aa0153527_story.html

In the same article, Paul Duprex, an associate professor of microbiology at Boston University, states that doomsday thinking is unfounded and that there is no credible evidence that the virus could have mutated and become airborne, “We need to be careful not to scare people with unrealistic numbers — it’s like this airborne suggestion — where’s the evidence, what’s the precedent, what are such scaremongering suggestions based on?” (Note: On the other hand, the virus has been shown to be active in the semen of those infected for up to 80 days after the onset of infection.4Ian M Mackay. “Ebola virus in semen is the real deal….” VDU’s blog 21 Aug 2014. (Accessed 24 Sep 2014.) http://virologydownunder.blogspot.com/2014/08/ebola-virus-in-semen-is-real-deal.html This isn’t new or surprising information. It just hasn’t been much of a problem to this point since 70-90 percent of those infected have been dying. But going forward, as more people survive, this could become more of an issue and needs to be watched.)

And one final observation, at no point in the report did it talk about the possibility of the epidemic spreading outside of West Africa in any notable numbers. That scenario still remains highly unlikely. Make no mistake; this is already a monumental tragedy for West Africa. But no matter what the final numbers turn out to be, it still looks to be strictly an African tragedy.

With all the shameless nonsense being spread on the internet and in the media, purely for the purpose of generating more readers, perhaps it’s worth remembering what FDR said in his first inauguration address, “The only thing we have to fear is fear itself.”

Make no mistake: fear is the problem. If not for the fear generated by lies, distrust of government and health authorities, there would be no epidemic now. If people in West Africa had trusted their governments and responded as Ugandans did in previous outbreaks, this outbreak too would have been over in a few weeks. Individuals with an agenda to discredit local governments and health authorities created a climate of fear that worked people into a frenzy. Once set in motion, those people then chose to ignore quarantines, break into Ebola clinics, continue to handle the dead and dying, and freely mingle with their neighbors, which caused the outbreak to became an epidemic. And it’s still going on. Even as I write this, Red Cross volunteers in Guinea were attacked while trying to collect the body of a person who is believed to have died from the disease.5 Elahe Izadi. “Red Cross volunteers attacked in Guinea while trying to bury an Ebola victim.” The Washington Post. September 24. (Accessed 24 Sep 2014.) http://www.washingtonpost.com/news/to-your-health/wp/2014/09/24/red-cross-volunteers-attacked-in-guinea-while-trying-to-bury-an-ebola-victim/

Now some of you might be thinking this could only happen with ignorant African villagers. It could never happen in the developed world. Unfortunately, if you think that, you would be wrong. Ignorance is neither defined nor constrained by geography, and it is the reason I keep speaking out against the fear mongering currently all over the press and the internet. People who know better, for reasons of their own, are telling stories about how Ebola was created in government labs or it’s a conspiracy cooked up by the pharmaceutical companies to sell vaccines or that the vaccines under development are experimental and will kill you. And many readers are eating it up! The bottom line is that there is little chance of Ebola spreading outside of Africa unless enough people in the West become distrustful of their own governments’ intentions, and then motivated by fear, they make the same kind of misguided decisions as the people in West Africa and end up turning a small outbreak into a full-blown epidemic. Truly, the only thing we have to fear is fear itself.