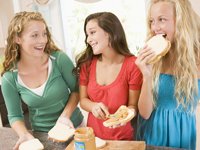 Nowadays, many people do not encourage their children to eat peanut butter.  When they are very young, it is often avoided in the hopes of preventing the development of a food allergy or asthma, the numbers of which have been steadily rising for the past couple of decades.  Then, as the kids get older, more and more schools and other organizations have begun banning peanut butter and other nut products for fear of setting off an anaphylactic reaction in another child.  But if your daughter has shown no signs of an allergy to peanuts, you might want to make sure she is eating peanut butter on a regular basis.  According to new research, peanut butter consumption in the tween and teenage years may help confer some protection from breast disease when these girls become women.

The study, which took place at Barnes Jewish Hospital and Washington University School of Medicine in St. Louis, Missouri, found a link between eating peanut butter frequently and a reduced risk of benign breast disease years later.1 Doheny, Kathleen. “Can Eating Peanut Butter Cut Breast Cancer Risk in Later Life?” WebMD. 27 September 2013. Accessed 3 October 2013. http://www.webmd.com/parenting/news/20130927/can-eating-peanut-butter-cut-breast-cancer-risk-in-later-life   While benign breast conditions are common and often harmless, some types including hyperplasia, papillomas, and fibroadenoma, among others, can produce changes within the breasts that are known to increase the likelihood of developing breast cancer over time.2 “How benign breast conditions affect breast cancer risk.” American Cancer Society. 24 August 2012. Accessed 4 October 2013. http://www.cancer.org/healthy/findcancerearly/womenshealth/non-cancerousbreastconditions/non-cancerous-breast-conditions-benign-br-cond-and-br-cancer-risk   The study subjects were more than 9,000 girls between the ages of nine and 15.  They were followed from 1996 through 2010, concluding when they were in their 20s.

After analyzing the data and concentrating their focus on certain vegetable proteins and vegetable fats, the scientists determined that a daily serving of peanut butter, nuts, beans, or corn were all associated with a 68 percent lower chance of developing benign breast disease.  But the single food called out as the most potentially beneficial for preventing cancer was peanut butter, which was shown to lower the risk of developing benign breast disease by 39 percent in girls who ate this food an average of just three times per week.

Although the researchers were not able to distinguish what it is about peanut butter that may provide these health benefits to young women, one possibility is the protein it contains.  Protein is important to the body’s ability to repair tissues and keep muscles, bone, and cartilage all healthy and functional.  Girls between the ages of nine and 13 should get 34 grams of protein every day and girls 14 and up should get 46 grams.3 “Protein.” Centers for Disease Control and Prevention. 4 October 2012. Accessed 4 October 2013. http://www.cdc.gov/nutrition/everyone/basics/protein.html But it should be noted that other high protein foods don’t seem to offer the same protective benefits as peanut butter.

Another explanation may lie as much with what the girls were not eating as with what they were.  Peanut butter is a healthy choice as part of a meal—at least compared to high fat/high sugar snack foods that might be eaten in its place–and it can be a great way to up your protein intake without consuming a lot of animal fats through meat and dairy products. In fact, peanut butter has about the same ratio of unsaturated to saturated fat as olive oil—about 80% unsaturated.  A 2012 study at the Cancer Institute of New Jersey in New Brunswick found that white women who consume red meat and poultry face a higher risk for breast cancer than their peers who are not meat eaters.4 Moore, Amber. “Eating Meat Associated With Higher Breast Cancer Risk in White Women.” Medical Daily. 3 November 2012. Accessed 4 October 2013. http://www.medicaldaily.com/eating-meat-associated-higher-breast-cancer-risk-white-women-243365

Then again, the cancer protective effect of peanuts might be due to the fact that they are high in phytoestrogens that are known to be cancer protective. Remember, peanuts are not nuts; they are legumes. Despite the “nut” in their name, they are more akin to soy beans than to actual nuts. In fact, peanuts have higher levels of genistein5 “Dietary Supplement Genistein Can Undermine Breast Cancer Treatment.” Sep. 23, 2008. Science Daily. (Accessed 4 Oct 2013.) http://www.sciencedaily.com/releases/2008/09/080923134318.htm than soy.

In addition to meal time, peanut butter is a tasty snack for many kids as well.  A smear of peanut butter on a banana or some whole grain crackers is satisfying and delicious after school and will provide a lot more nutrition than a plate of cookies or a bag of chips with their loads of calories and saturated fat.

So even if you can’t send a peanut butter sandwich with your child to school for lunch, keep some in the house and encourage your children to eat it several times a week.  You can have fun filling celery stalks with peanut butter, making homemade smoothies, and trying out a variety of different ways to add it to recipes.  And your kids may never even realize that you are sneaking them a major health boost all the while.