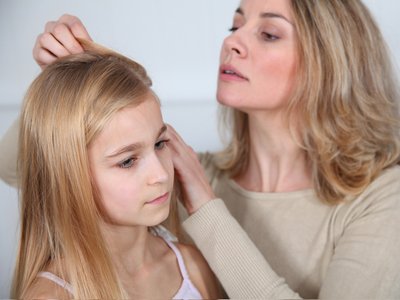 Almost every parent at some point or another experiences the fear of the dreaded phone call from the nurse when head lice are going around their children’s school or camp. These critters are highly contagious, and as we all know, kids tend to sit with their heads close together and freely share items such as hats and brushes with their friends. If your child is unlucky enough to catch lice, it becomes a major household hassle. You will need to check every family member’s scalp closely for bugs and their eggs, and bag up or wash in hot water any bedding, stuffed animals, pillows, and clothing that your kid has come into contact with. And now, to add insult to injury, the treatment is no longer quite so easy. New research has found that head lice in North America have become resistant to the standard over-the-counter products that used to exterminate them quickly.

The study, which took place at the University of Massachusetts, Amherst, showed that the vast majority of head lice now have a genetic mutation that provides them with resistance to the medications that have widely been used successfully for more than two decades.1 Mozes, Alan. “Head Lice Growing Resistant to Standard Meds.” WebMD. 14 March 2014. Accessed 24 March 2014. http://www.webmd.com/children/news/20140314/head-lice-growing-resistant-to-standard-meds The researchers gathered lice samples from 32 different sites around the United States and Canada. They analyzed the bugs’ DNA and discovered that more than 88 percent of them carried a particular mutation making them resistant to permethrin, the compound that is typically used to treat lice.

Over-the-counter products containing permethrin became the gold standard for treatment of lice in the early 1990s because they were very effective lice killers. These medications overstimulate the bugs’ central nervous systems, causing them to die. However, their success meant that permethrin formulas became essentially the only type of treatment commonly recommended by healthcare professionals. But, as we know from dealing with antibiotic-resistant superbugs, when a medication is overused as the main line of defense, the organism under attack will mutate to protect itself and develop resistance.

In the case of permethrin, the mutation began to take form after World War II, when the pesticide DDT was found to be an effective lice killer. This toxin was efficient in eradicating vast quantities of lice, but many of the survivors began adapting right away, giving rise to what is called the T1 mutation. It is this same mutation that renders the permethrin medications harmless to a great majority of head lice these days. Both DDT and permethrin are synthetic insecticides that affect the nervous system of the bugs. Over the past few years, many countries in Europe and South America have turned to other products to fight lice due to the overuse and eventual ineffectiveness of permethrin.

While head lice are not a health threat and they are not disease-carrying insects, they are quite a nuisance to get rid of once they enter your home. According to the Centers for Disease Control and Prevention, an estimated six to 12 million children between the ages of three and 11 are infested with lice each year in the United States alone.2 “Parasites – Lice – Head Lice.” Centers for Disease Control and Prevention. 24 September 2013. Accessed 25 March 2014. http://www.cdc.gov/parasites/lice/head/gen_info/faqs.html And that doesn’t take into consideration any parents or other adult caregivers to whom they may pass along the critters.

The best protection from lice is probably to avoid getting them in the first place. Since they run most rampant through schools, camps, and almost anywhere kids are regularly found, these are the spots that typically require the most head protection. Teach your children never to share brushes, headbands, ponytails, hats, or anything that goes in or on the hair with others, even their best friends. Keep girls with longer hair in braids–and yours as well if you will be spending time around lots of little ones–to limit the surface area that could make contact.

And if lice do make an appearance on one of your family member’s heads, don’t panic. Rather than using a toxin-based permethrin product that’s most likely not going to be effective, or one of the new prescription pharmaceutical products on the market that we know little about safety-wise, try a natural lice killer. A 2010 study at the University of Queensland in Australia found that tea tree oil and lavender oil used together eradicated almost all the lice in treated children, compared to only a 25 percent success rate for insecticide-based products.3 Barker, SC and Altman, PM. “A randomised, assessor blind, parallel group comparative efficacy trial of three products for the treatment of head lice in children–melaleuca oil and lavender oil, pyrethrins and piperonyl butoxide, and a ‘suffocation’ product.” BMC Dermatology. 20 August 2010. Accessed 25 March 2014. http://www.ncbi.nlm.nih.gov/pubmed/20727129 Let’s hear it for natural remedies.