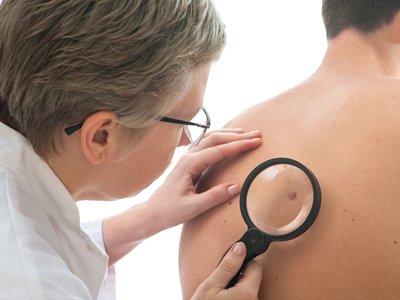 Most men like to consider themselves quite virile, so if they begin to experience any erectile difficulties they may be quick to request a prescription for Viagra. But before you rush to resolve your bedroom issues with this popular pharmaceutical pill, you might want to consider some of its potential health hazards. According to new research, taking Viagra appears to substantially raise the risk of getting a sometimes fatal form of skin cancer.

The study, which took place at the Warren Alpert Medical School of Brown University in Providence, Rhode Island, found that men using sildenafil, which is sold under the brand name Viagra, had a significantly higher risk of melanoma than did men who weren’t taking the drug.1 Aleccia, Jonel. “Viagra May Boost Risk of Deadly Skin Cancer, Study Finds.” NBC News. 7 April 2014. Accessed 12 April 2014. http://www.nbcnews.com/health/health-news/viagra-may-boost-risk-deadly-skin-cancer-study-finds-n73976 The subjects were 25,848 men who were participating in the Health Professionals’ Follow-up Study, which is an all-male, long-term trial focused on health-related topics. The average age among the volunteers was 65.

Approximately six percent of the subjects reported using Viagra at some point for erectile dysfunction issues. Those men taking Viagra were discovered to have a whopping 84 percent greater likelihood of being diagnosed with melanoma as compared to their counterparts who did not use these pills. And discontinuing the drug only decreased the risk by a little bit. Even if the participants had taken Viagra at some earlier point and then stopped its use, their risk of developing melanoma still remained at just about twice that of the men who had never taken this medication.

The researchers were careful to control for a number of possible mitigating factors, including a family history of skin cancer, the concentration of ultraviolet light in the area in which the subjects resided, the presence of other forms of cancer, and additional diseases that had been diagnosed. After this information was accounted for in all of the volunteers, the results of the study still remained the same.

It’s not yet clear why Viagra might contribute to the development of melanoma, but the researchers speculate that it could have to do with a shared genetic pathway that results in a more invasive malignancy. Interestingly, the subjects were not found to be at any increased risk for alternate forms of skin cancer, including basal cell or squamous cell carcinomas. The bad news is that, while melanoma is the least common type of skin cancer, it is also the deadliest type. According to the American Cancer Society, approximately 43,890 new melanomas will be diagnosed in men in the United States in 2014, and approximately 6,470 men will likely die of melanoma this year.2 “What are the key statistics about melanoma skin cancer?” American Cancer Society. 9 January 2014. Accessed 13 April 2014. http://www.cancer.org/cancer/skincancer-melanoma/detailedguide/melanoma-skin-cancer-key-statistics And the rate of new cases of melanoma has steadily been on the rise for the last 40 years. While that obviously can’t all be blamed on Viagra, it may certainly have been an influence since it received FDA approval in 1998.

At any rate, these findings seem to be a pretty serious potential reason why a man might want to skip taking Viagra. It has already been associated with such side effects as headaches, indigestion, flushed skin, nasal congestion, short-term vision changes, and fainting. Plus, a small percentage of men using Viagra have experienced sudden hearing or vision loss and, in the too much of a good thing category, erections that simply will not go away.3 “Erectile dysfunction: Viagra and other oral medications.” Mayo Clinic. 6 June 2012. Accessed 13 April 2014. http://www.mayoclinic.org/diseases-conditions/erectile-dysfunction/in-depth/erectile-dysfunction/art-20047821 And after all that, a 2010 study at Good Hope Hospital in Birmingham, England, found that less than half of the Viagra prescribed for men is actually working.4 Wylie, Kevan; et al. “Androgens, health and sexuality in women and men.” Maturitas. 12 August 2010. Accessed 13 April 2014. http://www.maturitas.org/article/S0378-5122(10)00309-9/abstract

So it truly doesn’t seem to be worthwhile taking Viagra, especially when there are natural alternatives that address the underlying causes of erectile dysfunction. A good hormone balancing formula can help improve testosterone levels and resolve erection difficulties; arginine can help with nitric oxide levels; and proteolytic enzymes can keep your blood flowing, all without any worries of side effects. However, if you (or the man you love) are insistent on sticking with Viagra or are concerned because it was taken in the past, don’t be shy about seeing a dermatologist on a regular basis for full-body skin screenings. Catching a melanoma in its earliest stages may make a life or death difference.

Choosing the Right Doctor for a Colonoscopy