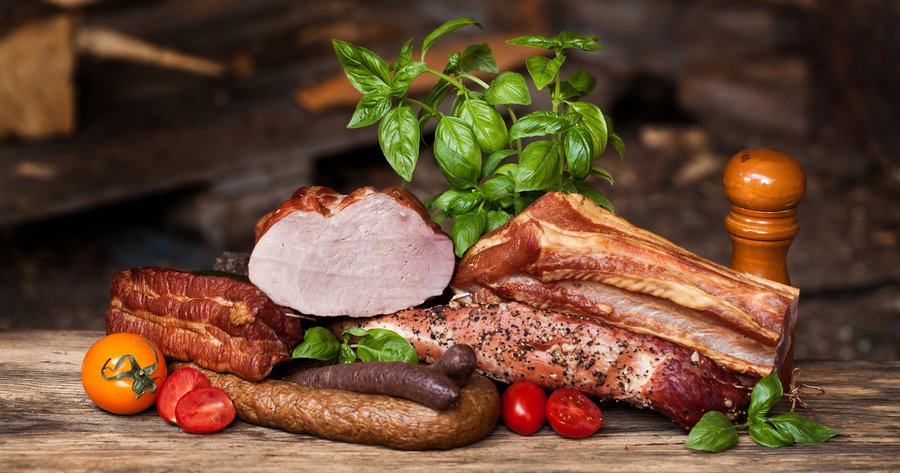 In Hawaii where I live, a favorite breakfast is Loco Moco: fried egg, white rice, and a hamburger patty all smothered with brown gravy and served with a side of bacon, ham, or sausage. For lunch, nothing could be better than Spam Musubi, comprised of a thick slab of fried spam inside of a seaweed wrap.  While few would expect to find these items on a health food menu, a new report from the World Health Organization (WHO) sheds light on just how unwholesome such delicacies really are.

According to WHO, processed meats like bacon, ham, and spam are among the worst possible things a person can consume, at least from the cancer-causing point of view.1 “Bacon, ham, and sausages ‘as big a cancer threat as smoking,’ WHO to warn.” 23 October 2015. The Telegraph. 23 October 2015. http://www.telegraph.co.uk/news/health/news/11950018/Bacon-ham-and-sausages-as-big-a-cancer-threat-as-smoking-WHO-to-warn.html In fact, the organization, which ranks substances according to carcinogenic properties, just classified processed meats right alongside cigarettes, asbestos, arsenic, radiation, and alcohol as known carcinogens-in the fifth, and worst­­ classification.  This action underlines recommendations from another major health organization, the World Cancer Research Fund, which issued a report several years ago asserting that consuming even small amounts of processed meats increases cancer risk. Fresh red meat was ranked only slightly better in the next-to-worst category of “probable carcinogens,” although as we’ve discussed previously, when it comes to red meat, how it’s raised, how it’s cooked, and how much you eat matter hugely. In any event, the result could be that packagers will need to add warning labels to processed meats in the future.2 Venosa, Ali. “Red Meat is Just as Likely to Give You Cancer as a Cigarette, the World Health Organization Says.” 23 October 2015. Medical Daily. 25 October 2015. http://www.medicaldaily.com/red-meat-just-likely-give-you-cancer-cigarette-world-health-organization-says-358750

Analysts believe that the cancer-causing properties of processed meat may come from substances that form during the processing itself-when meat is cured, salted, or smoked, with additional harm done when preservatives are added. As for fresh red meat, they suspect that a substance called ‘heme (or haem),” which is what gives red meat its color, “may” damage the colon.

Although the WHO conclusions were reached after a summit of scientists from 10 nations reviewed available research on the links between meat and cancer, the meat industry is outraged, and the outcry has been loud and swift. It’s no surprise that meat executives would be rattled, given that total worldwide meat consumption of meat products reached 310 million tons in 2013, an increase of more than 25 percent from 10 years earlier. Meat is huge business: in the US. Beef sales alone bring in $95 billion-a-year, and meat profits overall are at around $894 billion annually.3 Shanker, Deena. “How Meat Have Influenced Nutrition Guidelines for Decades.” 24 October 2015. The Atlantic. 24 October 2015. http://www.theatlantic.com/business/archive/2015/10/meat-industry-lobbying-political-nutrition/412243/

In response, the president of North American Meat, Barry Carpenter, rejected the findings as ridiculous in a dismissive statement:

“Red and processed meat are among 940 substances reviewed by International Agency for Research (IARC) and found to pose some level of theoretical hazard. [WHO] says you can enjoy your yoga class, but don’t breathe air, sit near a sun-filled window, drink wine or coffee, eat grilled food, or apply aloe vera.”

Meanwhile, Shalene McNeill, executive director of human nutrition research at the National Cattlemen’s Beef Association, was only slightly more circumspect: “The available scientific evidence does not support a causal relationship between any type of red or processed meat and any type of cancer,” she said. “Cancer is a complex disease that even the best and brightest minds don’t fully understand. Billions of dollars have been spent on studies all over the world and no single food has ever been proven to cause or cure cancer.”4 “Meat industry braces for WHO cancer risk verdict.” 23 October 2015. Reuters. 24 October 2015. http://www.reuters.com/article/2015/10/23/us-health-meat-idUSKCN0SH1XP20151023

Other experts said that the report should not be interpreted to mean that people should give up meat. For example, Professor Robert Pickard, a neurobiologist from the University of Cardiff in Great Britain said, “Avoiding red meat in the diet is not a protective strategy against cancer. The top priorities for cancer prevention remain smoking cessation, maintenance of normal body weight, and avoidance of high alcohol intakes. Choosing a meat-free diet is a lifestyle choice — it is not vital for health.” It should be noted that Dr. Pickard is a member of Britain’s Meat Advisory Council.

But again, it’s no surprise that meat industry big-wigs would stand up for their products. The more interesting result, perhaps, is the outcry coming from meat-loving citizens who still want to bring home the bacon.  In response to an article in The Telegraph, reader AJL comments: “There is risk in everything; a child choked to death on a grape recently. There is no such thing as ‘safe’ in anything in life. Meat eating is relatively low risk as foods go people have been doing it for millennia.”

And then Tikka 222 writes, “I love meat and consume around 7lb a week every week 52 weeks of the year at 65 not on any medication, no supplements. Last time I consulted my Doctor was 3 years ago for tendonitis from using the chainsaw for 5 hours cutting up a fallen oak.
Eat meat be healthy, happy and stick two fingers up at the vegies and vile vegans.”

The thing is that there are almost 2000 responses to the article, with more flowing in by the minute. Most of those responses criticize WHO for its conclusions. Apparently, these readers don’t take seriously studies such as one in 2013 that reviewed health data on half a million people and concluded that one out of every 30 deaths of people under the age of 69 was attributable to consuming processed meat.5 Adams, Stephen. “Processed meat blamed for one in 30 early deaths.” 7 March 2013. The Telegraph. 25 October 2015. http://www.telegraph.co.uk/news/health/news/9914283/Processed-meat-blamed-for-one-in-30-early-deaths.html That same study found a 72 per cent increased risk of dying from heart disease among processed meat eaters.

As alarmed as the meat industry might be at the moment, it’s unlikely that meat sales are going to drop precipitously anytime soon. If reports similar to the WHO one keep coming out, people might wean themselves off the sausage eventually. But it takes a long time for eating behavior to change even when studies show potential harm from indulging in beloved favorites, especially when there’s a lobbying group as powerful and capable of twisting the truth as the US meat industry involved. And let’s keep in mind, in a tip of the hat to the Paleo crowd, that the evidence against processed meats is far, far stronger than any suspected evidence against red meat–as long as you’re eating organic, grass-fed beef that is not cooked at high temperatures.