Radiation From Nail-Drying Machines Could Cause Skin Cancer

Another Reason to Avoid Nail Salons 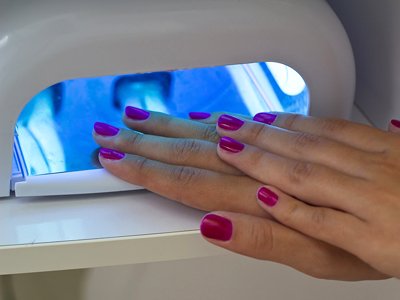 Just last year, we wrote about the health risks posed by nail salons, including most of the so-called “natural,” non-toxic establishments. In salons without great ventilation, customers and staff breathe in harmful fumes from the polishes; plus, when you get a ‘mani’ or a ‘pedi,’ there’s some danger of absorbing toxins through the skin. To make matters worse, as we pointed out previously, “There are other dangers in salons beyond the toxins. If salons don’t maintain superb sanitation and sterilize all equipment after each use, you could be exposed to fungi, infections, and even diseases like hepatitis.”

Now an article in JAMA (the Journal of the American Medical Association) alerts us to the fact that there’s yet one more reason to cancel your nail appointment. Apparently, the ultraviolet lamps many salons use to dry nails give off dangerous radiation that can cause skin cancer.1 Parker-Pope, Tara. “Nail Salons May Increase Skin Cancer Risk.” 30 April 2014. New York Times. 1 April 2014. http://well.blogs.nytimes.com/2014/04/30/nail-salon-lamps-may-increase-skin-cancer-risk/?_php=true&_type=blogs&ref=health&_r=0 And it doesn’t necessarily take a lifetime of weekly salon visits to incur the damage. As few as eight sessions are all that are needed to harm the skin, according to the researchers.

The lamps help ensure that a brand new manicure doesn’t get smeared before the customer even gets back to the car. They’re used exclusively for manicures, not pedicures, as most salons let the toes air dry or else put them under a blow dryer. After having the polish applied to the fingernails, the customer sticks her hands inside the small machine for an average of eight minutes and lets them rest there. When the hands come out, the polish is set and dried. This happens because the machine emits UV-A radiation–the same type used in tanning beds. Unfortunately, in addition to drying the nails, the UV-A rays break up strands of DNA within skin cells, and that can cause skin cancer.

My goodness! What we do to ourselves in the name of beauty!

The researchers tested 17 different types of UV drying lamps from 16 salons, attempting to determine how much radiation each was emitting. 2 Mundell, E.J. “Nail Salon UV Lamps: Are They Safe?” 1 April 2014. CBS News. 1 April 2014. http://www.cbsnews.com/news/nail-salon-uv-lamps-are-they-safe/ They discovered considerable variation in emissions from one machine to the next, depending on how many bulbs the machine used and the wattage of those bulbs. Essentially, the more wattage expended, the faster the nails dry, but the more risk to you. The researchers used a UV-measuring meter to assess the strength of emissions at five different locations inside each machine. They found that the strength varied from one place to another, which means that the position of your hands inside the machine actually affects your risk level. Not surprisingly, the exposure and damage were greatest in the area of the hand closest to the bulbs.

The scientists found that dangerous harm to the skin can be rendered in as few as eight sessions under the nail dryer, depending on the machine used and how long the customer sits under it. Lower radiation machines might allow for more sessions before damage results, but the scientists figure that on average, all it takes is 11 visits to the salon to incur DNA damage to the skin. In other words, one year of monthly visits would do the job, and most of us know at least one person who gets her nails done that often–year after year.

Using blinders-on reasoning, experts concluded that the risk is minimal since a single appointment at the salon won’t instantly result in cancer.  CBS News says, “…A new study suggests that the average visit to a nail salon carries little carcinogenic potential.” The study director, Dr. Lyndsay Shipp , from Georgia Regents University in Atlanta, commented, “I wouldn’t tell a patient to stop going unless they were going multiple times a month…. Personally, I won’t stop getting manicures myself.”3 Seaman, Andrew M. “Study: nail salon UV lamps could cause damage. 1 May 2014. Chicago Tribune. 2 May 2014. http://www.chicagotribune.com/health/chi-nail-salon-uv-lamps-study-20140501,0,5733885.story Her colleague, Dr. Alina Markova, head of the Dermatology Department at Boston University added, “Just one risk factor of DNA damage doesn’t mean you’ll have a clinical outcome of skin cancer or photo-aging… While we’re starting to realize these UV nail lamps are relatively safe, we still need to realize that the artificial UV devices that are hazardous are tanning beds.”

Well, yes, tanning beds may be worse than nail dryers, but that doesn’t make nail dryers kosher. Dr. Markova’s comment is sort of like saying don’t worry about having $10,000 stolen from you. It could have been $100,000. But the $10,000 still is a loss, and if you’re losing that much every month, in less than a year you’ve lost over $100,000 anyway. And in five years, your losses have totaled over a half million dollars. The damage is cumulative!

Dr. Shipp further recommends that women wear suntan lotion to their manicure appointments to protect their skin. She doesn’t seem to consider the fact that manicures usually involve a good soaking and scrubbing, which will likely remove any suntan lotion previously applied. (Anyway, suntan lotion brings problems of its own–but that’s another blog.) She also doesn’t seem to have done the simple math to assess the risk. While the skin cancer risk may be minimal if you only have one manicure appointment every five years, going regularly certainly does incur danger. Her own study results attest to this fact.

What are your options if you really want a manicure? The ideal strategy is to do your own nails at home, using a natural polish that you’ve checked out at Skin Deep’s Cosmetics Database. Why breathe in toxic fumes, risk infection, plus expose your skin to UV damage–all to paint your nails? If you’re absolutely incapable of doing a respectable job on your own nails, at least try to find a non-toxic salon, and do read our article on dangers in natural salons first so you know what to look out for.  Tell the manicurist that you want to air dry your nails, or ask for a blow dryer instead of a UV machine. If you absolutely must use a UV machine for some reason, at least make sure you stay under it only for the minimal amount of time.