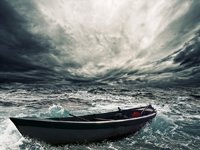 If it feels like all you ever do is work, it might be because like most American adults, you spend an average of 40 percent of your waking hours at work.1 That’s fortuitous if you have safe and enjoyable employment, but for a significant segment of the workforce, danger lurks at their risky, high stress job. According to a recent study out of UC Davis, work-related injuries and illnesses cost the nation more than $250 billion annually. That’s $31 billion more than the direct and indirect costs for cancer, $76 billion more than diabetes costs, and $187 billion more than the cost of strokes. As study director and UC Davis public health professor Dr. J. Paul Leigh said, “It’s unfortunate that occupational health doesn’t get the attention it deserves. The costs are enormous and continue to grow.”

Looked at another way, work outranks every other single cause of healthcare expenditure.  Risky, high stress jobs not only sicken and disable many, but also cause an inordinate number of fatalities. In 2010 alone, work injuries and illnesses caused 59,000 deaths. In addition, there were 8,564,600 work-related injuries on record that year and 516,100 work-related illnesses. These figures, of course, only include injuries and illnesses that were reported and that can be directly attributed to work. Certainly, many work-related illnesses don’t get reported, especially those that develop slowly as a result of constant and long-term work related stress, or long term exposure to toxic chemicals whose toxicity will not be “discovered” For another 10-20 years. Can you say asbestos? Also, mental health care related to work stress doesn’t necessarily show up in these figures.

Of course, not all work environments pose extreme danger or disabling influences.  Most workers are lucky enough to benefit emotionally, mentally, and financially from time on the job. But study after study does show that certain professions come packed with life-threatening dangers. This is especially true of a dozen or so careers involving physical labor and not much monetary reward.2 For instance, fishing is the most hazardous of all career paths, with a chilling death rate of 200 per 100,000, mostly from drowning in foul weather conditions or because of equipment malfunction. No other career even comes close in terms of danger. Fishermen make an average of $44,000 a year—not much given the risks.

Other career paths high on the danger list include logging, with a fatality rate of about 62 per 100,000. The average logger makes around $40,000 a year. Pilots rank next on the dangerous career paths list. They earn an average $118,000 a year, with a 57 per 100,000 death rate annually. Most of the pilot fatalities come from crop dusting and bush flying in small planes that sweep close to the ground, a hazardous proposition. Farmers and ranchers rank fourth in terms of work-related fatalities, dying from work-related issues such as machinery accidents, injuries from animal kicks and bites, and exposure to toxic pesticides and fertilizers. For taking on that high level of risk, farmers average only $30,450 a year. Roofers, steel workers, garbage collectors, machinery operators, and construction workers also rank in the top 10 of dangerous careers.

According to various surveys, the list of most stressful jobs differs from the most dangerous list, except that pilots rank third on both inventories—making flying one of the most dangerous and most stressful of all possible career paths. The 10 careers highest in stress, according to the Careercast 2012 report, include enlisted soldier, firefighter, military general, police officer, event coordinator, public relations executive, CEO, photojournalist, and taxi driver.3

But ranking on the list doesn’t tell the entire story. Take a look at the career statistics for physicians, for instance. While the job of doctor ranks a relatively sunny number 40 out of the 200 careers included in the Careercast data, it takes that spot only because general practice physicians earn an average of $205,000 annually. The high salary skews the scale to make medicine look like a reasonable career choice. But on other parameters, doctoring gets very low scores. The work environment (which includes physical as well as emotional hazards) rates an extraordinary 85+ for difficulty, compared to a 48 scored by the medical secretary who enjoys a relatively peaceful environment sitting in the front office. The stress level for physicians comes in at 25, compared to just 12 for a parole officer.

No wonder doctors have such high levels of drug addiction and alcoholism. No wonder the suicide rate among physicians far exceeds the rate in the population at large — 40 percent higher for male doctors and 130 percent higher for female doctors.4 No wonder depression is rampant among medical students and doctors and one-third of physicians wish they had chosen a different career path.5 Apparently, big bucks don’t always compensate for challenging work conditions.

If you’re already well-ensconced in your career, this data probably won’t make much of a difference to you, but maybe it should. Spending every day in a stressful or toxic work environment may be even more detrimental to your health than choosing to eat at McDonalds on a daily basis. As the statistics above bear out, work can kill. Or it can stress you out so much that you contract a disease that kills you.