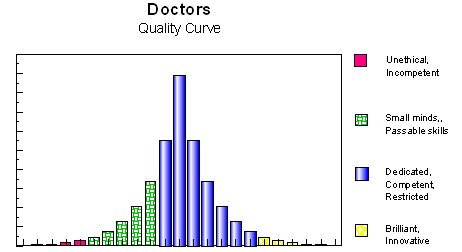 The following newsletter is a rewrite of part of a chapter that never made it into Lessons from the Miracle Doctors. At some point, I’ll rewrite and release the other parts, which deal with the FDA and the Pharmaceutical companies. Think of it as something to look forward to.

Let me begin by saying that, unlike many in the alternative health movement, I am not anti-doctor. I was, in fact, a premed student — albeit not a very dedicated one. I understand that sometimes there is no substitute for a doctor. Think for a moment of the injuries you might suffer in an automobile accident. No herb or vitamin could help you in the same way that a good doctor can.

Despite all of the games played with statistics, the numbers are undeniable.

How did this happen? How did we reach this point?

Although Modern Medicine likes to trace its roots to Hippocrates, the patron saint of today’s doctors, the fact is that the roots of Modern Medicine are sunk much deeper in the Newtonian views of the 17th century when philosophers and scientists defined the universe as a giant machine ruled by physics and math. According to this view of the universe, objects behaved in predictable ways unless acted upon by outside forces. Physicians of that era were not immune to this new paradigm and likewise began to define the human body as a machine that would run smoothly until acted upon by some outside agent. According to this new paradigm, the human body could be analyzed, catalogued, adjusted, and tweaked as required.

This viewpoint became more and more dominant as time went by, until by the 19th century:

As it turns out, this paradigm works extremely well when it comes to surgical repair. If you break an arm, the doctor works with that part of the body and repairs the arm. If you’re shot by a bullet, the doctor removes the bullet and repairs all of the separate parts of your body damaged by the bullet. It’s pretty much a direct one-to-one correlation.

Unfortunately, the paradigm fails when it comes to disease. Consider:

Keep in mind, that in addition to all of the side effects that these drugs cause (which require further medication); there is a major fundamental flaw in your doctor’s treatment. All the doctor has done is treat one symptom, high blood pressure, but has done nothing to deal with the real problem, clogged arteries. So eventually, as your arteries continue to clog to the point where even the medication no longer helps, you start getting the inevitable chest pains. Your doctor then chases the next set of symptoms and performs a coronary bypass or angioplasty to relieve the symptoms.

But then again, in addition to all of the side effects and complications and dangers of surgery, we are once more presented with a fundamental flaw in your doctor’s treatment. If all your doctor did was bypass or clear the arteries supplying blood to your heart, doesn’t that mean that all of the other arteries in your body are still clogged — including the arteries that supply blood to your brain? (You bet it does.) Whoa! Isn’t that going to be a problem? Since the arteries are narrowed, won’t it be more likely that a small blood clot will get lodged in your brain and cause a stroke?

Absolutely! But that’s a different symptom. At this point your doctor once again prescribes another drug to deal with this problem: Coumadin® (medicinal rat poison), which inhibits clotting and thins your blood so that it flows more easily through narrowed arteries.

The bottom line is that the average person 65 years or older in the United States takes between 15-23 (depending on whose statistics you use) drugs prescribed by their doctor and/or purchased over the counter, each and every day of their lives. Only the first 1 or 2 drugs actually deal with the symptoms presented by the original medical problem. The other 13-21 drugs are all required to deal with the negative side effects of the original 2, plus the interactions of all the other drugs they are taking. And the really sad fact is that in over 95% of all cases, the original problem could have been resolved by merely changing diet and lifestyle — with no side effects.

I know a lot about doctors. As I mentioned earlier, I was premed myself in college, and there are many doctors in my family. I both respect them for the dedicated service they provide, and, at the same time, am really angry with them for the needless suffering they inflict. The problem is that doctors are only human, and as such, they have all of the brilliance, stupidity, nobility, greed, dedication, flaws and ego traits that plague each and every one of us.

None of this would be a problem, except for one fact. And that is, that despite their human frailties and lack of divine insight, they have set themselves up as the ONLY authoritative dispensers of health that we are allowed to use and have incorporated all means at their disposal to prevent any contrary points of view from being heard. Against healers outside of their fraternity, they are particularly ruthless. There are numerous examples, but three stand out.

But even within the AMA, more subtle (but equally effective) means are used to keep members in line.

Most people have been led to believe that if an alternative therapy really had any value, it would eventually be tested and incorporated by the medical establishment. The only reason you never hear about any alternative therapies for the major diseases from physicians is that they don’t work. Right? Not quite.

In 1997, I was involved in creating a new brewing process for herbal tinctures that produced tinctures 100-200% stronger than anything the world had ever seen before. The first tincture produced using this new process was an Echinacea based immune enhancer. Over the next year and a half, we watched as testimonial after testimonial poured in confirming its efficacy. In mid 1998, however, something remarkable happened. A woman with metastasized breast cancer was about to commence chemotherapy treatment. But her doctor was very concerned because, even before starting the treatment, her white cell count was at 2600, about half of normal; and, as her doctor was aware, the chemotherapy itself was likely to drive that count significantly lower. The day after her first chemo treatment, with her oncologist’s approval, she began taking this Echinacea formula. In the first two weeks, instead of her white count going down, it went up – from 2600 to 4600. In the next two weeks, it went up to 5200.This represents an astounding 100% improvement in immune function while undergoing chemo.

This was exciting. If these results held up in testing, it would make a significant difference for any patient undergoing chemo and/or radiation therapy, which both tend to devastate the patient’s immune system — making them vulnerable to opportunistic infection. I contacted a number of the major hospitals and clinics around the country (including, Cedars Sinai, Sloan Kettering, Beth Israel, and the Mayo Clinic — not to mention a number of facilities that had “alternative healing” units) to have them test this formula with their patients. I even offered to pay for the testing. No response. Not easily discouraged, I sent two follow up letters to each of the hospitals and clinics. After three letters to each hospital, the sum total response was one letter from UCLA stating, “I have no interest in receiving any further communication from you unless it contains copies of published peer-reviewed scientific studies (laboratory or clinical).” For a moment, I was confused. I mean, that’s why I had contacted the doctor to have him study it. Then the problem became very clear.

As the doctor stated, he would only recognize a “peer-reviewed” study. He, however, was not willing to study it himself; and neither were any of his peers. A potentially powerful, all-natural, safe food-grade complement to traditional cancer therapy had been effectively marginalized and dismissed by the fraternity of medical “superiors” without ever being tested.

So where do we go from here?

I believe that medical doctors are now in a very difficult position. It is as though they are locked in a room with two 800-pound gorillas. One of those gorillas is managed health care, whose sole goal is to restrict the way these doctors practice medicine and to limit the amount of money they make doing it. The other gorilla is alternative health, which has become a multi-billion dollar industry despite the best efforts of the medical community to stop it.

The one thing that I do know is that if you are indeed in a room with two huge gorillas, there is one place you don’t want to be — between them. At some point, you are going to have to get behind one of them…or you will be crushed in the middle. And since, by definition, managed health care is dedicated to crushing the individual doctor, there is only one option. At some point, doctors will have to step in behind supplements and herbs.

So you think, based on Dr. Davis’ testimony, that’s impossible? Not really. I believe it is inevitable — and therein lies my greatest fear. I believe that Dr Davis’s testimony is not an attempt to eliminate alternative medicine, but a step in the direction of co-opting it — of turning alternative medicine into another branch of organized medicine, available only by prescription and through their members. If we were talking about business (and with billions of dollars at stake, are we not), we might say that we were witnessing an early salvo in a hostile takeover bid — a takeover initiated, not by individual doctors (the vast majority of whom really do mean well), but rather by the mob mentality of organized medicine (which truly is hostile to alternative medicine and all who practice it).