What Resides on Hospital Workers’ Clothing

For anyone out there who still clings to the image of hospitals as sterile environments, think again.  There are serious, drug-resistant bacteria running rampant throughout your hospital…and it turns out that hospital staff are prime carriers.

A recent study that took place at Shaare Zedek Medical Center in Jerusalem, Israel, found that lab coats, scrubs, and other articles of medical clothing were more often than not contaminated by various types of bacteria, including the potentially deadly MRSA.1  The researchers tested the garments worn by 60 doctors and 75 registered nurses on duty and discovered illness-causing bacteria on more than 60 percent of them.

Nurses, who are visiting hundreds of sick patients each shift, were found to have potentially dangerous bacteria on their uniforms 65 percent of the time.  Doctors were only marginally better, with 60 percent of the analyses showing bacteria.  Antibiotic-resistant bacteria, which have mutated and cannot be killed off by common prescription medications, were present on 14 percent of the nurses’ attire and on 6 percent of the doctors’.  MRSA, or methicillin-resistant staphylococcus aureus, which is staph infection that’s become a super-bug, was found on 8 of the uniforms.  Samples were taken from the sleeves, midsection, and pockets of 238 articles of clothing.

Clearly this research provides some clues as to how germs can be spread throughout a hospital.  But it also serves as an important reminder to health care workers everywhere.  Since the bacteria are not jumping off uniforms and onto patients, the staff must obviously touch their clothing, then touch a patient.  Therefore, a little basic hygiene in the form of hand washing between patients should theoretically cut down on transmission of all kinds of bacteria.  And changing uniforms regularly also makes a big difference.  When the clothing was changed daily, the researchers found that only 8 percent of the samples were contaminated by antibiotic-resistant bacteria.  However, when the staffers changed every other day instead, that figure jumped to a 29 percent contamination.

To some of the patients in a hospital, any bacterial infection is potentially dangerous, even life threatening.  But antibiotic-resistant bacteria, and especially MRSA, are perilous to us all.  MRSA accounts for some 19,000 deaths annually in the United States and an equivalent number in Europe.  Since the early 1990s, MRSA infections have been the leading cause of hospital-acquired skin infection in the United States.  And it’s not just in hospitals anymore.  MRSA is showing up in health clubs, schools, jails, sex clubs—just about anywhere bacteria can grow.

Researchers at Olive View-UCLA Medical Center in Sylmar, California, analyzed skin infections that showed up in their emergency room and the results were nothing short of alarming.  In 2002, methicillin-resistant staph caused 29 percent of those infections.  Just two years later in 2004, the rate was up to 64 percent.  In 2008, a new strain of MRSA appeared that demonstrated resistance to the antibiotic Zyvox, which was considered to be the one solution that would work when all other antibiotics failed.  By 2010, the number of children hospitalized with dangerous drug-resistant staph infections had surged tenfold over the previous decade.2

And scarily, MRSA is extremely difficult to get under control.  The mutating process for staph is fueled by the continued use of antibiotics.  In any colony or strain of bacteria, there are a multitude of minor genetic variants among the individual bacterium.  Some of these variants will have a built in advantage when it comes to surviving a particular antibiotic.  Thus, when the colony is confronted by an antibiotic, those with no resistance to the antibiotic die off, leaving those with a natural resistance to survive and replicate.  That means that any colony of bacteria is self-selective to breed resistant strains to any given antibiotic it encounters.

So, if you find yourself stuck as an in-patient in a hospital, take a few precautions to make sure you don’t catch something worse than what you came in with from contaminated staff.  After every visit at which you come into physical contact with a health care worker, if possible, wash the parts of your body that have been touched.  You can also improve your odds by bringing a Silver Sol based gel with you to periodically apply to your exposed skin for extra protection.  The silver particles in Silver Sol are permanently suspended in water, where the mineral’s charge is transferred to the entire body of water, making it a very effective tool to fight staph infections on the skin.  And try to get discharged as soon as possible to avoid all these bacteria entirely. Don’t hang around just because you like the food. 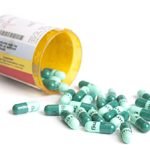 Cutting Back on Antibiotics