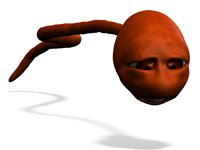 When you are sitting down to eat a snack, why not get a bowl of walnuts to munch on?  Healthy and natural, they will provide more nutrition and antioxidants than any processed junk food you’ve got in the pantry.  Plus, if you are male, they just might help your chances of increasing fertility and having a baby one day.  In a nutshell, a new study has found that eating walnuts may improve the overall quality of a man’s sperm.

The research was conducted at the University of California at Los Angeles Fielding School of Public Health.1 The participants were 117 healthy men between the ages of 21 and 35, all of whom report consuming typical American diets.  The volunteers were randomly placed in one of two groups for the 12-week study period.  Both groups were told to continue eating what they might normally have each day. However, one group of 59 men was asked to eat 2.5 ounces of walnuts every day in addition to their normal foods, while the other group of 58 men was asked to refrain from consuming any tree nuts at all.  Some of the walnut eaters ate their portions, which amounted to slightly more than half a cup of nuts, as a stand-alone food while others chopped them up and mixed them into other types of food such as applesauce or meatloaf.

Prior to beginning the research, each subject’s sperm was tested to determine its quality, which included the concentration, motility, vitality, shape, size, and presence of any chromosomal abnormalities.  At the conclusion of the experiment, a sample of each man’s sperm was once again submitted and analyzed for the same factors. These examinations were conducted blindly by one of the scientists who had no idea which participants were the nut eaters.  The results showed that the walnut-eating men had improvements in the quality of their sperm, while not one of those who avoided nuts showed an improvement.  In fact, those volunteers in the nut group who had the poorest quality of sperm initially had the biggest gains in quality after those 12 weeks.

Now, in the interest of full disclosure, this study was partially funded by the California Walnut Commission.  But the results have been in line with other studies of the effects of certain foods on our health and fertility. One of the health benefits of walnuts is that they have 2.6 grams of omega-3 fatty acids in every ounce — more even than the amount in four ounces of salmon.2  In previous studies, omega-3 fatty acids have been linked to increasing fertility through the production of better sperm in men with fertility issues.3  And, as an added advantage, omega-3 fatty acids have been linked to many other health benefits including those for the brain and improved vision. However, it should be noted that the Omega-3’s in Walnuts are in the form of alpha-linoleic acid, which many people cannot convert to the DHA and EPA, the usable forms, as found in fish and krill oil. So perhaps the benefits may not be due entirely to the fats in walnuts.

And in fact, one of the most important health benefits of walnuts is that they are packed with antioxidants. A gram of walnuts contains nearly 70 units of polyphenols — more than any other nut tested in a 2011 study.4 And the polyphenols in walnuts are also up to 15 times more potent than those found in other sources like vitamin E. Notably, a 2003 study found that the specific polyphenols in walnuts had a “remarkable radical scavenging effect.”5 Even better, three of the antioxidants in walnuts are glansrins A–C, which are ellagitannins — and Jon Barron has written an entire newsletter devoted to the power of ellagitannins. When most people think of ellagitannins, they think raspberries and pomegranates, but it turns out that walnuts are a great source too. In fact, an ounce of walnuts contains more antioxidants than the sum of what the average person gets from fruits and vegetables in an entire day.

But, returning to the subject of sperm, infertility is a major problem today. Somewhere between 10 and 15 percent of couples experience trouble conceiving after at least one year of trying.6 And in approximately 50 percent of the cases, male fertility problems are either the sole or partial cause.7  The most common problems in men include low sperm production, lack of motility, varicocele (an enlargement of the veins in the scrotum), hormonal disorders, defects in the chromosomes, and various lifestyle factors that lessen the quality and/or function of the sperm.

So if you are considering having a baby at some point in the near future, it is both potential parents’ responsibility to watch what they eat and maintain as healthy and natural a diet as possible.  While mom may have to keep that up a lot longer through her pregnancy and breastfeeding, dad needs to do his part to make sure conception can take place.  It’s also a good habit to stick with once the baby is born.  New parents will need all the energy they can muster to meet the wonderful yet exhausting round-the-clock demands of an infant.