A new study out of the Boston Children’s Hospital found that 40 percent of children between the ages of eight-months to two years are deficient in vitamin D. In a report published in the Archives of Pediatric and Adolescent Medicine, the study’s authors say the deficiencies result from kids being overweight, not taking vitamin supplements, and not drinking enough vitamin D-fortified milk. Apparently, the children were not exposed to enough sunlight to have any impact on their body’s ability to produce vitamin D levels — a problem not uncommon in adults, too — which leaves supplemental sources as the only alternative.

Vitamin D deficiency can make children’s bones more brittle, impair their skeletal development, give them bowed legs, make them tired and shaky, and in extreme cases, lead to rickets and even seizures. But these symptoms are rare; more typically, deficient kids (as with adults) show no symptoms at all. Only three of the 140 vitamin D-deficient kids in the study had soft or weakened bones, while another 13 showed signs of minerals leaching from their bones. The “silent” nature of pediatric vitamin D shortage worries researchers, because those seemingly benign deficiencies in childhood may well lead to very serious problems in adulthood, including an increased risk of cancer, a weakened immune system, cardiovascular problems, diabetes, hypertension, and kidney disease.

The problems that develop later on from pediatric vitamin D-deficiency become compounded if the deficiency continues into adulthood. And studies show that, in fact, vitamin D inadequacy is as common among adolescents and adults as it is among kids. In a 2004 study, Dr. Gordon found that 42 percent of adolescents lacked sufficient vitamin D. And according to a 2006 Mayo Clinic publication, about 36 percent of otherwise healthy adults in the US also lack adequate vitamin D, with that percentage jumping to 57 percent among hospital inpatients. The percentage is even higher in Europe, and among the elderly. And those estimates are based on the outdated model of 200 IU of vitamin D per day for adults and 400 IU per day for women who are pregnant or lactating and for children under the age of 10 years. 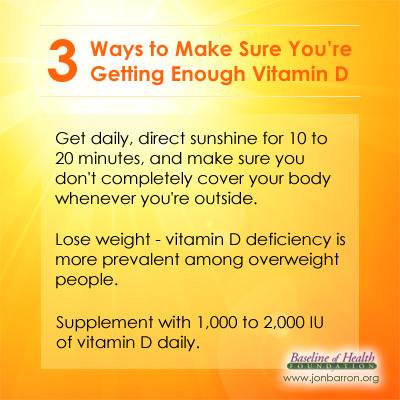 New studies show that the dose required to achieve a healthy blood level of vitamin D is somewhere in the neighborhood of 1,000–4,000 IU per day — which is still less than that obtained through several minutes of midday sun exposure. Vitamin D toxicity does not usually develop below 10,000 units per day.

Not surprisingly, the incidence of vitamin D deficiency goes up during the winter when access to sunshine becomes limited. Also, darker skinned individuals have more of a propensity to lack sufficient stores of vitamin D. According to an article in American Family Physician, “To produce a similar amount of vitamin D as persons with lightly pigmented skin, persons with darkly pigmented skin require three to six times more sun exposure.”

As alarming as the prevalence figures are given the potentially serious consequences of vitamin D deficiency, it’s equally alarming to discover that the medical community remains largely unaware of the issue, leaving many patients with wrong diagnoses. A 1998 study of 298 patients in a Massachusetts hospital found that most of those with a vitamin D deficiency did not get diagnosed correctly. The article in American Family Physician outlined several disturbing case studies. In one, an elderly man was suffering from progressive weakness and congestive heart failure. Turns out that he was vitamin D deficient. As the article mentions, the man was elderly, in a weakened state, malnourished, and without recent sun exposure — a prime candidate.

Symptoms that might indicate a deficiency in adults include muscle weakness, fatigue, and nonspecific aches and pains. You can imagine how many doctors would dismiss such symptoms as hypochondriasis. And dismissing the symptoms in this way is dangerous, because as mentioned above, vitamin D deficiency can lead to serious problems. For instance, one study found that putting elderly women on vitamin D supplementation in combination with calcium reduced the risk of falling by 49%. Other studies have found a 50% decrease in risk of large bowel cancer and prostate cancer by increasing vitamin D intake. And yet another study attributes 25% of breast cancer deaths among women in northern Europe to inadequate vitamin D levels. Other findings implicate vitamin D shortfalls in the development of cardiovascular disease, psoriasis, multiple sclerosis, arthritis, lupus, renal complications, and osteoporosis.

So should you start drinking milk by the jug, or force it down the throats of your kids to get enough vitamin D? Given the issues associated with dairy products, why pay for the milk and get all of its problems, when you can just take the supplement directly for a fraction of the cost? A better solution would be to:

Swine Flu, Nothing Has Changed