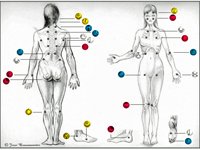 Cancer is unfortunately a common disease that has touched most of our lives when a loved one has fallen victim.  It is awful to watch those undergoing cancer treatment experience painful and uncomfortable chemotherapy side effects.  But now, there is new hope on the horizon for people sickened by their potential cure.  Recent research has found that Jin Shin Jyutsu, a type of touch therapy that originated thousands of years ago in Japan, can provide relief from some of the worst symptoms of cancer treatment and chemotherapy effects.1

The study took place at the University of Kentucky Markey Cancer Center in Lexington.  The volunteers were 159 cancer patients presently involved in treatment at the center.  The researchers had the subjects rate the levels of the symptoms they were experiencing between zero and 10, with zero representing no symptoms at all.  This included any pain, nausea, and/or stress that the participants were feeling.  Beginning with their first session of Jin Shin Jyutsu, the patients rated their symptoms both before and after each touch therapy appointment.

The sessions provided the subjects with a noticeable improvement in all categories of side effects.  This relief expressed at the end of the first Jin Shin Jyutsu session was equal to that felt after later sessions.  Stress was the area most affected, with an average rating decrease of three points.  Nausea and pain followed closely behind, being reduced by an average of two points each on the scale.  These assessments were across the board for all patients involved in the study, whether they were male or female, older or younger, and no matter what form of cancer they had been diagnosed with.

The most significant improvements were noted after sessions in a Jin Shin Jyutsu treatment room, as opposed to those that took place in a patient’s hospital room or an outpatient chemotherapy center.  The sessions in the dedicated room were generally longer treatments, so it is possible that more time devoted to Jin Shin Jyutsu provides greater benefits.  Further research on the subject would be necessary, but it would be interesting to determine whether that location is more beneficial due to its relaxing, less medical feeling atmosphere as well.

It should be noted that there were no controls to determine whether the positive results were actually a specific result of the therapy, or merely a consistent placebo effect experienced across the board by the patients. But then again, does that really matter? If you have a loved one experiencing pain and discomfort as a result of their cancer treatments, do you really care why they feel better — as long as they feel better? Then again, another point worth noting is that the study made no comparison between Jin Shin Jyutsu and any other alternative technique — touch or otherwise — to determine which, if any, was more effective at relieving discomfort. The bottom line is that this was a study designed for patients and their loved ones, not the Journal of the American Medical Association.

The Jin Shin Jyutsu treatments are similar in principle to acupressure, involving touching the energy zones of the body to release tension and blockages.2  According to this particular form of touch therapy, the body has 52 Safety Energy Lock points that can be gently worked.  There are also flows of life energy within the body, which can be soothed by touching certain points along energy pathways in a particular pattern.3

If Jin Shin Jyutsu, and possibly other methods of touch therapy, can help cancer patients alleviate their side effects, it would be wonderful news, especially because this type of treatment adds no further complications to the condition.  Most patients are already dealing with enough in the way of side effects from the chemotherapy itself.  That’s because the drug’s objective is to poison the system — creating pain and discomfort often worse than the disease itself, at least in its early stages.  The toxins attack healthy, dividing blood cells and cause blood poisoning.  The gastrointestinal system is thrown into convulsions causing nausea, diarrhea, loss of appetite, cramps, and progressive weakness.  Needless to say, any type of therapy that can lessen these symptoms without creating new ones would be a godsend to most cancer patients undergoing chemo.

If you or someone close to you has received a diagnosis of cancer, it pays to do some research on complementary alternative medicine practices to help strengthen the immune system and keep the body strong naturally, especially if it will soon be pumped through with toxic chemicals.  Jin Shin Jyutsu may be just what the body needs to decrease its discomfort and help fight off the disease — even if the actual study wasn’t up to medical standards.

2 “Is Jin Shin Jyutsu similar to Acupuncture?” Being Well Being. 2012. Accessed 1 July 2012. <http://www.beingwellbeing.com/Is-Jin-Shin-Jyutsu-similar-to-Acupuncture/>.

Gallery image with caption: How Laetrile Works, B17

Gallery image with caption: Radiation Therapy, What Comes After?