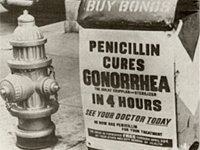 No one wants to go to the doctor and receive a diagnosis of the STD gonorrhea.  But on the bright side, at least it has been easy to treat and completely cure since the 1940’s with a course of antibiotics.  That is, until now.
Recently, according to the World Health Organization, strains of the STD gonorrhea have appeared that are antibiotic resistant, even to the antibiotics typically used to treat this disease.1  The first evidence was recorded in Japan in 2008, when a gonorrhea superbug could not be eliminated no matter which antibiotics were tried, including ceftriaxone sodium, a third-generation cephalosporin — a class of antibiotic that has traditionally been successful as the last line of gonorrhea treatment.
More recently, there have been a growing number of cases around the world documented in France, Sweden, Australia, and the United Kingdom in which gonorrhea is antibiotic-resistant to all of the cephalosporins.  This is a potential medical catastrophe, considering that more than 106 million people become infected with this sexually transmitted disease globally each year.  Gonorrhea is the second most frequently contracted STD.  Transmitted by bodily fluids through sexual contact, and although often asymptomatic, untreated gonorrhea can result in male and female infertility, pelvic inflammatory disease, stillbirth, ectopic pregnancies, and serious eye infections in newborns as well as increasing the risk of developing HIV.2
Our overdependence on and overuse of antibiotics has created numerous superbugs that have mutated to the point where the drugs have little or no effect on them.  Among the other bacteria that have used their natural abilities to outmaneuver the antibiotics that once conquered them are strains of tuberculosis and pneumonia.3  And gonorrhea is one of the most advanced of them all, since it has been found to maintain a resistance to previously used forms of antibiotics long after they were stopped — creating an ever increasing list of treatments that are now useless against this infection.  In addition, gonorrhea has mutated in such a way as to lessen its symptoms, so after infection takes place, the victim may not experience much if any pain upon urination, making it less likely that early treatment will be sought.
Not that it may matter soon, anyway.  If things continue the way they have been going, there won’t be a treatment around that can fight gonorrhea off – early treatment or not.  For the moment, there has been some success in using a multi-pronged approach with several different antibiotics at once.  That is working because antibiotics vary in the way they kill microbes.  While some kill bacteria by breeching their walls, others attack the structures within the bacteria that allow them to make proteins.  By using a combination of these methods, it is easier to weaken and destroy the bacteria.  However, as the bacteria continuously evolve, they find ways to elude ever-stronger antibiotic mixes and only the weakest of the gonorrhea bacteria die…leaving only the superbug variants to multiply by the billions and trillions.
Obviously, the best way for all of us to avoid gonorrhea infection is to practice safe sex and maintain a monogamous relationship.  If both partners have been tested and are free of sexually transmitted diseases, you should remain disease-free.  But this is not the reality or choice for everyone, so if you are sexually intimate with multiple partners, condoms are a necessity.
You can also take antipathogenic supplements to battle bacteria naturally, using substances that microbes cannot evolve around.  Taking an antipathogen fomula that contains a combination of powerful bacteria fighters will provide your body with more pathogenic defenses than prescription medication because natural antipathogens often contain dozens of biochemicals.  Not all of them are always active, but many of the non-active biochemicals work to potentiate the active ones and offer combinations with each other numbering in the thousands — presenting a complexity that makes it virtually impossible for microbes to work around.  Some of the antipathogens to look for are ginger, onion, garlic, olive leaf, oil of oregano, and zinc.  Then again, you might want to look at colloidal silver, which was the treatment of choice for gonorrhea before antibiotics. Newer versions such as Guardian Silver Sol are even safer and more effective.