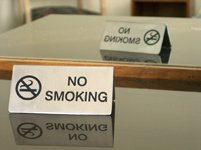 Travel can be a wonderful experience, letting us gain new knowledge and appreciation for other places.  But, on the downside, it can screw up your internal clock and change your eating habits for the worse with so much high calorie restaurant fare.  And now, new research suggests that there’s another health factor to consider when traveling: the hotel we choose.  Even if most of us would never consider taking a smoking room in a hotel, we may still be on the receiving end of exposure to nicotine when staying in a non-smoking room as well.

The study, which was conducted at San Diego State University in California, found that those hotels with only a partial ban on smoking leave patrons with evidence of nicotine in their bodies even when they sleep in a designated non-smoking room.1 Sifferlin, Alexandra. “Non-Smoking Hotel Rooms Aren’t a Guarantee of a Smoke-Free Stay.” Time. 15 May 2013. Accessed 20 May 2013. http://healthland.time.com/2013/05/15/non-smoking-hotel-rooms-still-exposes-occupants-to-smoke/.   The researchers took samples of both the air and particles on the surface of furniture in the hotel rooms to analyze for the presence of nicotine.  The evaluation encompassed both smoking and non-smoking rooms in 30 hotels that enforce a partial smoking ban and another 10 hotels that enforce a full smoking ban.  In addition, they collected fingertip swabs and urine samples from non-smoking volunteers who stayed at each of these hotels.

The air quality was the poorest in the rooms that allow smoking, needless to say.  However, when compared to hotels with a total ban on smoking, the non-smoking rooms within hotels with partial bans were found to have a 40 percent higher level of nicotine in the air.  The human subjects who were tested were also determined to have greater amounts of nicotine and certain tobacco byproducts in both their urine and on the surfaces of their fingers.  One of the byproducts that the scientists tested for was cotinine, which is metabolized in the liver and remains in the body longer than nicotine itself.  A 1999 study at the Centers for Disease Control and Prevention in Atlanta, Georgia, found that high cotinine levels in children were associated with increased wheezing, decreased lung function, and more sick days taken from school.2 Mannino, DM; et al. “Health effects related to environmental tobacco smoke exposure in children in the United States: data from the Third National Health and Nutrition Examination Survey.” Archives of Pediatric Adolescent Medicine. January 2001. Accessed 20 May 2013. http://www.ncbi.nlm.nih.gov/pubmed/11177060

Some of the rooms in the present research may have been smoking rooms before a hotel switched over to a partial ban, and the residue lingered.  A 2010 study that also took place at San Diego State University determined that third hand smoke remains in the former homes of smokers for months after the smoker has moved out–beyond even two months of vacancy and a thorough cleaning!3 Matt, Georg E.; et al. “When smokers move out and non-smokers move in: residential thirdhand smoke pollution and exposure.” Tobacco Control. 30 October 2010. Accessed 20 May 2013. http://tobaccocontrol.bmj.com/content/20/1/e1.abstract?sid=e49d29c0-3211-41f0-af1c-c6fde4bde85b   In other cases, it may be that the smoke particles are traveling from nearby smoking rooms or other areas of the hotel in which it is allowed and seeping under the doorways or entering through the ventilation systems of the non-smoking rooms.  In any case, the only way to avoid exposure to this third hand smoke appears to be to make your reservations exclusively in hotels with a complete smoking ban, and preferably those that have banned smoking since their construction.

Since 2006, an increasing number of hotels are adopting a smoke-free policy, which was a trend begun by the Westin chain.4 “Hotels.” Americans for Nonsmokers’ Rights. Accessed 20 May 2013. http://www.no-smoke.org/learnmore.php?id=188   But as usual, the government is lagging behind. Only four states in America–Indiana, Michigan, North Dakota, and Wisconsin–have enacted laws requiring a smoking ban in hotels.  Another 71 cities and counties across the country have passed their own non-smoking laws for hotels.

While we’ve all heard plenty of information on the dangers of second hand smoke when spending time with smokers, third hand smoke (the gases and small particles in cigarette smoke that are deposited on every surface they come in contact with) can be quite the health hazard too.  Research conducted in 2010 at the Lawrence Berkeley National Laboratory in California, found that the tobacco smoke residue that lingers after a cigarette is put out reacts with the common indoor air pollutant nitrous acid to produce dangerous carcinogens.5 Yarris, Lynn. “Study reveals dangers of nicotine in third-hand smoke.” Berkeley Lab. 8 February 2010. Accessed 20 May 2013. http://newscenter.lbl.gov/news-releases/2010/02/08/dangers-of-third-hand-smoke/.

Now, maybe all of this isn’t such an issue for those of us who only travel on occasion and stay the night in a hotel room once or twice a year.  However, for those who travel extensively for business or pleasure, or who bring their children, this could potentially become a natural health hazard.  It’s important to do a little research and make sure the hotel you are staying in has a total ban on smoking and a not partial one. Note: some hotels take this very seriously and charge fines of $250-$500 if a guest smokes in a non-smoking room.  Sticking with a chain that has a complete ban is a safe way to go.  It also can’t hurt to ask when they enacted the ban, since a newly smoke-free hotel is going to have a lot more nicotine residue in the air and on room surfaces than one that has always been smoke-free or has been smoke-free for years. You can also ask about smoking fines, as high fines tend to actually keep the hotels smoke free.