When Jon first wrote Lessons from the Miracle Doctors, he titled the chapter on exercise “Move or Die.” Recent studies now show that’s even more true than Jon thought at the time. It turns out that getting up from your desk even for a moment or two goes a long way toward preventing diabetes and heart disease. In fact, if you don’t get up frequently, you raise your risk of disease even if you go to the gym for vigorous workouts.

A study of 4,757 adults just published in the European Health Journal found that those sedentary employees who barely moved from their desks during working hours imperiled their health. In general, the subjects who moved the least during working hours had the most risk factors for heart disease and diabetes, while those who both moved frequently during the day and engaged in regular exercise had the least.

The participants in the study wore devices called accelerometers attached to their hips. These devices measure walking, running, and standing activity. They also had regular testing of waist circumference, cholesterol, blood sugar, blood pressure, and blood protein concentrations over a three-year period, from 2003 to 2006. The most sedentary participants were inactive for over 21 hours per day according to the report, while at the other end of the scale, the most active participants sat only two hours a day. But it was the number of breaks that subjects took rather than the number of hours they sat that made the biggest health difference — even when the breaks lasted only a minute.

Lead researcher Genevieve Healy of the University of Queensland, Australia, says it isn’t clear why breaking up long sedentary periods with frequent movement is so helpful, but she postulates that by regularly contracting large posture muscles, we “flush out the bad stuff.” In fact, in her study, those who took the most breaks had the lowest levels of “bad stuff”– lower levels of blood fats, higher levels of good cholesterol, less insulin resistance, and fewer protein inflammation markers. In other words, they have a decreased risk for diabetes, high blood pressure, and cardiovascular disease. Those who took the most breaks also had waist circumference measurements an average of 4.1 centimeters (1.6 inches) smaller than those who stayed glued to their desks the most.

Dr. Healy says, “Even if you exercise for 30 to 60 minutes a day, what you do for the rest of the day may also be important for your cardiovascular health. This research suggests that even small changes to a person’s activity levels [as little as standing up regularly] might help to lower cardiovascular risk.”

And Dr. JoAnn Manson of Brigham and Women’s Hospital in Boston, adds, “This is perhaps the most convincing evidence yet that prolonged sitting is dangerous to our health. It may be an independent risk factor for heart disease, even after accounting for structured exercise.” (Think DVT on a long plane flight.)

How many breaks does it take to protect your health? The data showed that the most active subjects took up to 1,300 breaks per week, compared to only around 100 for the most sedentary. Consider that three breaks an hour in a 40-hour week only comes to 120 breaks — and that’s the lowest end of the scale. Also remember that the data showed that you can’t make up for prolonged periods of inactivity by cramming it in on the weekend. Again, it’s sitting for long periods of time without breaks that creates the problems, and exercise later on in the day doesn’t compensate adequately.

On the other hand, the data does NOT suggest that you should run out to Starbucks for a Grande concoction every 15 minutes, nor that you should give up your afternoon jog because you stood up and stretched 40 times on Tuesday. The bottom line here is that activity leads to good health, and that means activity spread throughout the day and throughout all endeavors. If you have a sedentary desk job, you need to figure out how to keep yourself moving without going so kinetic that the boss calls in the EAP folks to administer valium. And surprise, it’s not as hard as you think. There are countless opportunities throughout the day.

The experts suggest standing while talking on the phone, walking over to colleagues rather than emailing them, taking the stairs and strolling the corridors. All obvious stuff, but as the chair of the American Council for Fitness & Nutrition, Susan Finn, points out, “Setting up huge goals for people to get them to devote huge blocks of time during the day to exercise just doesn’t work. People won’t do it. Instead, getting people to engage in purposeful activity, trying to motivate small changes, is the way to go. It’s all about making this stuff, these small changes, doable for people, and the workplace is a very good example, a very good place to start.”

Now, if Jon can only figure out how to write his next book while standing up. 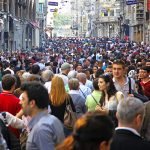