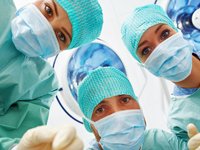 If you indulge in worrying about medical errors and how they might affect you, here’s something National Enquirer-worthy to fret about. According to an article in The New York Times, any time you go into the operating room for a procedure, you risk leaving with the scalpel sewn inside of you.1

Each year, about 4,000 “retained surgical objects” (RSOs) are found inside US patients who have previously undergone surgery. The organization No Thing Left Behind, which describes itself as “A National Surgical Patient-Safety Project to Prevent Retained Surgical Items,”reports on its website that RSOs fall into four categories.2 These include soft goods, including towels and sponges; needles; surgical instruments; and miscellaneous small items–a category that might include everything from the surgeon’s wedding ring to his reading glasses. The most common sites on the body are the chest, abdomen, pelvis and the vagina, particularly after a woman gives birth. The risk is highest in overweight individuals undergoing emergency abdominal surgery.

As Dr. Verna Gibbs, a professor of surgery at UC San Francisco (she’s also the director of No Thing Left Behind), says, “We’ve anesthetized them, we take away their ability to think, to breathe, and we cut them open and operate on them. There’s no patient advocate standing over them saying, ‘Don’t forget that sponge in them.’ I consider it a great affront that we still manage to leave our tools inside of people.”

By far, the most common retained surgical objects are little sponges that doctors stick into patients to soak up blood during procedures. Sponges account for two-thirds of all RSO medical errors. Since a single patient might have numerous sponges inserted at the site of the surgery, it’s easy to lose one in the bloody mess, especially if the doctor numbers among the one in every six US surgeons who has a drinking problem, or if he’s a young resident who’s been up for 48 consecutive hours.

No Thing Left Behind reports that tighter cautionary measures have reduced the incidence of retained sponges, but unfortunately, it’s a case of one step forward, two back.

“With retained sponges under better control,” says the website, “now we are seeing increased reports of retained miscellaneous small items and unretrieved device fragments. These include intact but separated parts of surgical items … broken pieces of instruments, small microneedles, trocars, guidewires and sheaths.”

The problem with retained objects goes far beyond discomfort. Foreign objects can cause extreme pain, infection, and internal obstructions. They typically require a second operation for removal or at the least, involve longer hospitalizations.

The good news is that technology exists that can reduce the incidence of at least the retained sponges. There isn’t much that can be done to ensure that the surgeon doesn’t leave a pair of scissors inside of you, but sponges are now available equipped with bar codes. The sponges can be scanned before the surgery and then after the surgery to make sure that every sponge is accounted for. Alternatively, there are sponges that come with radio frequency tags. After surgery, a scan can be used to alert the medical team if any sponges are still inside the patient.

It seems like a no-brainer for hospitals to use these safety measures, especially considering that doing so adds only about $10 onto the cost of a procedure. And yet, many hospitals refuse to implement the technology, claiming that it’s just too expensive. Some experts say the hospitals just don’t want to lay out the tiny investment. Others say the mistakes ought to be avoided even without the technology.

“Technology is but an aid,” says Dr. Gibbs. “The way that safety problems are corrected and fixed is by changing the culture of the O.R.”

What this means for you is that you have yet another reason to avoid the hospital if at all possible. If you must get surgery, check the hospital’s record on RSO’s. You can use hospitalsafetyscore.org or the Leapfrog group as a resource.3 Also, don’t be afraid to ask if your hospital uses technology to ensure removal of all surgical objects. And if you notice that your surgeon carries loose pens behind his ear or has a habit of dropping things when he speaks, you might consider switching to another doc–preferably one who doesn’t have friends that eat Junior Mints.