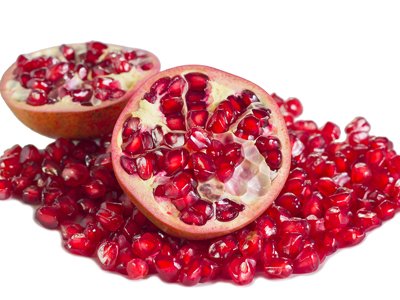 Study on Pomegranates and Breast Cancer

If an apple a day doesn’t keep the doctor away, its look-alike cousin the pomegranate just might. A study has found that a substance in pomegranates can slow or even stop the growth of breast cancer tumors. The study, just published in Cancer Prevention Research, found 10 phytochemicals in pomegranates that seem to inhibit the growth of estrogen-responsive breast tumors.1 Lynn S. Adams, Yanjun Zhang, et al. “Pomegranate Ellagitannin–Derived Compounds Exhibit Antiproliferative and Antiaromatase Activity in Breast Cancer Cells In vitro.” Cancer Prev Res January 2010 3; 108. http://cancerpreventionresearch.aacrjournals.org/content/3/1/108.abstract  The phytochemicals, called ellagitannins, work by blocking an enzyme called aromatase, which feeds estrogen and plays a key role in breast tumor growth. The ellagitannin called urolithin B had the strongest inhibitory effect.

As I’ve discussed previously, different fruits have different mixes of ellagitannins, with each mix providing a different emphasis of benefits. Whereas the mix of ellagitannins in red raspberries appears particularly well suited in combating colon cancer, it now appears that pomegranates provide special benefits when dealing with breast cancer. The study also confirms what I’ve been saying for years about ellagic acid — that the health benefits in pomegranates and raspberries are in the ellagitanins, not the ellagic acid as offered by some supplement manufacturers.

Many of the key drugs given to patients who have estrogen-dependent breast tumors act in a fashion similar to the ellagitannins, also inhibiting aromatase. But the director of the study, Dr. Shiuan Chen of the City of Hope Cancer Research and Treatment Center in Duarte, California, said patients should not try to substitute pomegranate for their medications. “We do not recommend people start taking this as a replacement for the AI’s,” Dr. Chen said. “They (pomegranate compounds) are not as potent as the real drugs so we think that the interest probably is more on the prevention end rather than in a therapeutic purpose.”

Other experts also caution against relying on pomegranate as a substitute for drugs. According to Gary Stoner of Ohio State University, “It’s not clear that these levels could be achieved in animals or in humans because the (compounds) are not well absorbed into blood when provided in the diet.”

The researchers didn’t expect to find the pomegranate derivatives to be as effective as they were. “We were surprised by our findings,” Dr. Chen said. “We previously found other fruits, such as grapes, to be capable of the inhibition of aromatase. But phytochemicals in pomegranates and in grapes are different.”

The surprising factor here is that the researchers found their results surprising. After all, back in 2004 I wrote about the cancer-fighting properties of pomegranates, specifically mentioning breast cancer. That’s one of the reasons I included pomegranate in my Superfood formula, writing on August 30, 2004 that, “Supplementation with pomegranate extract makes sense if you are looking at cancer prevention, maintaining a healthy heart, reducing bad cholesterol, lowering blood pressure, and protecting against free radicals and aging.” That same year, The European Journal of Cancer Prevention published a study discussing the breast cancer-fighting properties of pomegranate juice and pomegranate oil when administered to mice.2 Mehta R, Lansky E. “Breast cancer chemopreventive properties of pomegranate (Punica granatum) fruit extracts in a mouse mammary organ culture.” European Journal of Cancer Prevention: August 2004 – Volume 13 – Issue 4 – pp 345-348. http://journals.lww.com/eurjcancerprev/Abstract/2004/08000/Breast_cancer_chemopreventive_properties_of.15.aspx

The fact is, supplementing with antioxidant-rich pomegranate couldn’t hurt, at worst. The scientists think the compounds in pomegranates may play a role in regulating estrogen levels and regulating menstrual and menopausal symptoms. This means that pomegranate might help reduce cramping, mood swings, hot flashes, and so on. And then there are all the other benefits associated with the fruit — and there are plenty of those.

For one thing, research shows that pomegranate reduced heart disease risk factors not only in lab tests, but also in preliminary human trials. A 2004 study published in the Journal of Clinical Nutrition found that by taking the equivalent of a cup of pomegranate juice daily for one year, patients who had severe carotid artery stenosis reduced arterial plaque by 35 percent, reduced bad cholesterol by 20 percent, reduced cholesterol oxidation by 90 percent, and reduced blood pressure in just two weeks.3 Michael Aviram. Mira Rosenblat, Diana Gaitini, et al. “Pomegranate juice consumption for 3 years by patients with carotid artery stenosis reduces common carotid intima-media thickness, blood pressure and LDL oxidation.” Clinical Nutrition. June 2004 Volume 23, Issue 3, Pages 423–433. http://www.clinicalnutritionjournal.com/article/S0261-5614(03)00213-9/abstract  One year later, a study published in the American Journal of the College of Cardiology found that in just three months, drinking a cup of pomegranate juice daily improved the amount of oxygen getting to the heart muscle of patients who had heart disease.4 Sumner MD, Elliott-Eller M, Weidner G, et al. “Effects of pomegranate juice consumption on myocardial perfusion in patients with coronary heart disease.” Am J Cardiol. 2005 Sep 15;96(6):810-4. http://www.ncbi.nlm.nih.gov/pubmed/16169367  All in all, it makes you wonder what Gary Stoner was referring to when he said, “[These compounds] are not well absorbed into blood when provided in the diet.”

As for the cancer-fighting properties of pomegranates, several studies have found pomegranate useful in combating prostate cancer. Research out of Stanford University completed this past August found that men with prostate cancer who drank a glass of pomegranate juice daily had far slower cancer cell proliferation than those who didn’t drink the juice.5 Allan J. Pantuck1, John T. Leppert1, et al. “Phase II Study of Pomegranate Juice for Men with Rising Prostate-Specific Antigen following Surgery or Radiation for Prostate Cancer.” Clin Cancer Res  July 1, 2006 12; 4018. http://clincancerres.aacrjournals.org/content/12/13/4018.full  The researchers followed 48 men over a five year period, and those who drank the juice took four times as long for their PSA test markers to double compared to the non-juice drinkers. Studies also have found that pomegranate juice may prevent skin and lung cancer.

Other conditions that show improvement after consuming pomegranate include erectile dysfunction, arthritis, dental plaque, and diarrhea. Plus, pomegranate juice is antibacterial and antiviral.

To enjoy pomegranate’s benefits, you can drink pomegranate juice (but make sure it isn’t sweetened, and raw chilled juice is best — not so much pasteurized), take pomegranate extract supplements, crack the fruit open and eat it, or take it as part of a superfood formula.