Pollen Counts May Be on the Rise 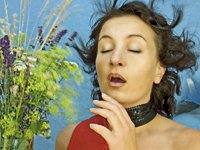 Seasonal allergy sufferers may have to face even worse bouts of stuffy noses, itchy red eyes, and scratchy throats in coming years.  The pollen levels that provokes their immune systems and revs them into overdrive is expected to possibly double by 2040 from the levels that are typically found now, according to the latest research.

The study, conducted at Rutgers University in New Brunswick, New Jersey, is predicting that pollen counts will be between one-and-a-half and two times higher than current levels within the next few decades.1 Doheny, Kathleen. “Global Warming May Double Pollen by 2040.” WebMD. 9 November 2012. Accessed 13 November 2012.  http://www.webmd.com/allergies/news/20121108/global-warming-double-pollen   This was determined using specialized computer modeling programs.  The researchers also used these programs to forecast timing for the pollen seasons of the future.  They found that the production of pollen will start earlier in the season and will peak sooner as well.

These anticipated increases in future pollen levels are being attributed to climate changes expected to gradually take place over the upcoming years.  Even minute differences in temperature and other climactic elements such as sea levels and precipitation can influence the soil and growth of many types of trees, flowers, and grasses.2 “Elements of Change.” World Meteorological Association. Accessed 14 November 2012.  http://www.wmo.int/pages/themes/climate/elements_climate_change.php   This, in turn, will affect the timing and amount of pollen production, when it peaks, the length of time that it remains present in the atmosphere, and more.

Other scientists have attempted to predict climate change effects on future pollen production before, but with little success.  Using more simplistic models that focused only on a few indicators and elements, such as expected precipitation and temperature levels, they could not form a complete picture of the pollen forecast.  However, this computer model plugs in a tremendous amount of data on economic development, growth, and other factors to provide the fullest indications possible right now of how our environment might be altered.  Which is not to say that any of this is definite–after all, meteorologists analyze weather forecast models for two days in the future and patterns change in that small span of time…making their predictions sometimes seem like a 50-50 proposition.  So, needless to say, even if these computer models are perfectly executed, we don’t truly know how quickly or slowly climate change effects will take place so it may all be just educated guesswork.

As far as pollen’s effect on us, the researchers would not commit to how these increased counts might affect those with seasonal allergies.  However, it seems fairly safe to assume that if pollen levels truly double, those of us with allergies can most likely expect to have increasingly worse reactions.  They may occur at slightly different times if the peak production is earlier than it is now, but it will be harder and harder to avoid exposure if the allergen is in the process of doubling its presence.  Current recommendations from health experts to combat pollen during peak allergy season include staying indoors with the windows closed when pollen counts are at their highest during the morning hours between 5 and 10 a.m., not touching pets that have been outside during this time, and drying all clothing in a dryer rather than on a line outdoors.3 “Pollen.” The National Institute of Environmental Health Sciences. 11 April 2012.  Accessed 14 November 2012.  http://www.niehs.nih.gov/health/topics/conditions/asthma/allergens/pollen/

Of course, higher pollen counts would be a boon to the pharmaceutical industry, which already makes a very big business out of creating, promoting, and selling all sorts of medications to treat allergies.  There are drugs to take to alleviate sinus pain, to block the histamines in order to stop the allergic reaction, to prevent an allergic reaction from occurring or lessening its severity, and more.  And although they may have made advancements through the years so that taking allergy medication does not necessarily mean slogging through your day in a stupor, there are still side effects to consider, such as fatigue, dry mouth, headaches, dizziness, and more.4 “Allergy medications: Know your options.” Mayo Clinic. 23 June 2011. Accessed 14 November 2012.  http://www.mayoclinic.com/health/allergy-medications/AA00037

For a better, more natural way to combat pollen allergies, try a detoxing program to rid your body of traces of food allergens, which make your body more susceptible to pollen allergies. In addition, a full spectrum antioxidant can slow down the release of histamines into your bloodstream, and immunomodulators may be useful in calming an overactive immune system.  These methods may be more beneficial than ever if pollen levels do eventually skyrocket in years to come. But the single most important thing you take are enzymes — both digestive with your meals and systemic proteolytic enzymes between meals to remove Circulating Immune Complexes (CIC’s), which serve as trip wires in your body to launch allergy attacks at the first sign of pollen. Remove the CIC’s and your body will respond a lot more slowly and a lot less dramatically when confronted with pollen.