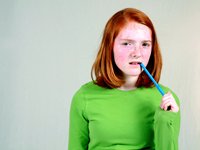 If you’ve been back-to-school-shopping with your kids recently, you probably noticed that Dora-, Spiderman- and Disney-branded products are all the rage this year.  While your kids may feel chic and popular toting these designer brands, the headlines have been telling a different story. It seems that many school materials and supplies, including the cute designer wares, are full of toxic phthalates.1

Phthalates–chemicals that make plastic flexible–have long been widely used in children’s toys, clothing, diapers, food containers and other products.  Unfortunately, these chemicals have been linked to ADHD, asthma, obesity, inflammation, cancer, birth defects, and other issues.  Consumer watchdog groups have pushed the Feds since the 1970s to protect kids and ban the use of phthalate chemicals in children’s products. There have been a variety of bans since that time as part of an ongoing wrestling match between makers and distributors of toys for children and the U.S. Government, but as of now, school supplies remain exempt from such restrictions.2

Phthalates are a common additive to PVCs, perhaps the most common plastic material used. The Consumer Products Safety Commission Reform Act of 2008 placed temporary bans on phthalates used in children toys, as well as in clothing and food containers.  Several types of phthalate chemicals were permanently banned. The act also mandated further study with a final recommendation to be issued later in 2012. As mentioned above, existing bans focus on phthalates in toys, but not on other products, including school supplies.

Studies on the prevalence of environmental phthalates have found high levels of the toxin in samples of human and rat urine, breast milk, human skin cells, and household dust.3  The studies found clear negative effects of phthalates on male reproductive development, alteration of hormone levels in men and women, and decreased levels of fertility in women. They also indicated links to birth defects, reduced sperm count, and breast cancer.

Think of your child with her head resting on her vinyl notebook–either because it’s naptime or the class activity has lulled her into a trance.  And then think about her chewing on her plastic ballpoint pen while taking a test or her skin in contact with vinyl rain boots, rain coat, lunchbox, and backpack, It’s enough to make you want to just pack her into one of those little rolling hamster balls to keep her safe. But alas, those are also made of PVC.

What can you do? Consumer groups recommend that you avoid shiny plastic products and stick to fabric when it comes to school supplies. But this gets tricky too. SafeMama.com (a resource on child safety, product recalls, and non-toxic living, recently posted the results of their search for safer backpacks.4 They found, for example, that while LL Bean guaranteed the absence of PVC in its backpacks, it wouldn’t guarantee the absence of phthalates.

Fortunately, the New Jersey Human Services Department Office for Prevention of Developmental Disabilities has a resource for you called “PVC-A Major Source of Phthalates” (www.nj.gov/humanservices/opmrdd/health/pvc.html). It includes a list of school products that contain PVCs and PVC-free alternatives.

Short of dressing your child in leaves and sending her to school with sticks and clay tablets for school supplies, you might take the sensible precaution of avoiding school supplies and outerwear made with or containing vinyl. Its worth noting that children’s products that contain PVCs also often contain trace amounts of lead, cadmium, and organotins (compounds with tin linked to hydrocarbons)–all of which, as the New Jersey website says, “can be toxic to your child’s health.” So much for worrying about whether or not Johnny did his homework!