The pharmaceutical industry in the US reaps more than $300 billion a year in profits from selling prescription medicines (and that’s not counting sales of therapeutic devices), making it the single most profitable business in the country.1 In fact, projections show that the industry is poised to jump to $400 billion in earnings within the next three years, increasing proceeds by an extraordinary $125 billion each year. What’s incredible here isn’t just that pharmaceuticals add up to such big business, but rather, that they net such incredible profits in spite of the fact that they rank as the Number 2 cause of unintentional death in this country, surpassing even traffic fatalities.

But somehow, in spite of the deadly track record, pharmaceutical sales continue to increase by gargantuan margins. To stay at the top of the heap requires not only ingenuity and effort, it turns out, but also bribery. Jon Barron has written before about the how drug companies make contributions large and small to doctors and medical organizations in order to woo them. As an example, in the last six months of 2009, industry giant Pfizer paid more than $20 million to 4,500 doctors and other medical professionals for consulting and speaking on its behalf.

And that’s just the tip of the iceberg. This pharmaceutical corruption drives companies to lavish gifts, lunches, research grants, samples, discounts, contributions, club memberships and more to physicians in order to sway them to prescribe their products and speak on their behalf. Twenty-five percent of all physicians accept cash gifts from drug companies and 75 percent routinely accept in-kind gifts for meals, entertainment, and the like.2 Psychiatrists are the biggest gift recipients, by the way.3 Department chairs and professors of psychiatry at numerous universities routinely accept gifts worth up to tens of thousands of dollars for lecturing on behalf of drug companies. Take, as an example, Charles Nemeroff, Chairman of Psychiatry at Emory University, who earned more than $2.8 million from various drug makers between 2000 and 2007, or former director of the National Institute of Mental Health Dr. Frederick Goodwin, who pocketed more than $1.3 million for giving marketing lectures on behalf of drug companies to physicians. Perhaps that explains why antidepressants are the most commonly prescribed medication in the US, despite the fact that their track record is downright depressing.

Pharmaceutical corruption, of course, makes the prescription your doctor seems so anxious to lay on you a bit suspect. You don’t know if he might be pushing the particular pill or potion he wants you to take because the industry rep from XYZ Company just bought his family a cruise to Grand Cayman and he feels indebted, or if, in fact, he knows from “legitimate” professional research and experience that XYZ has the best product for you, and that you absolutely positively need it. Given the toxic side effects that so many pharmaceuticals come laden with, that final distinction is key. In fact, investigations have shown that payments from the pharmaceutical industry do influence physician’s prescribing choices and also drive up drug prices when doctors advocate for the pricier medications they have been financially influenced to support.

Concern about conflict of interest has been bubbling around for a while in consumer advocacy groups, and now, at last, new legislation promises to throw cold water on the practice of pharmaceutical industry compensation being shelled out indiscriminately to physicians and hospitals unbeknownst to patients. A new law going into effect as of September, 2013, will require drug companies to reveal just who they’re making payments to and in what amounts. This provision, known as the “Sunshine Act,” (because it lets the ‘sun shine in’) is an addendum to the already extant Patient Protection and Affordable Care Act. The law specifies that the information about payments to doctors and medical institutions needs to be posted on a federal website easily available to the public and that it must be searchable, clear and understandable, and able to be easily aggregated and downloaded.4

The law holds drug companies accountable, fining them up to $10,000 per instance if they fail to report an incident of any payment worth more than $10. The fine goes up to  $100,000 if they knowingly fail to report an incident.5  It seems like a rather sticky matter to differentiate between “accidental omission” and “knowingly failing to report,” but in any event, the cumulative fines can go up to $1 million a year.

Not surprisingly, some experts voiced objections, insisting that the law will compromise good medical care. George Loewenstein, PhD, and colleagues from Carnegie Mellon University in Pittsburgh, said, “Disclosure can lead physicians to offer biased advice. Two mechanisms involved are strategic exaggeration (the tendency to provide more biased advice to counteract anticipated discounting) and moral licensing (the often unconscious feeling that biased advice is justifiable because the advisee has been warned).”

As the kids say in their text messages, OMG! Dr. Loewenstein’s comments essentially mean that doctors might overcompensate to show that they aren’t influenced by the bribes they take, so they’ll exaggerate the benefits of the medications. Or, they’ll go overboard in prescribing medications because they will embrace the “caveat emptor,” philosophy, figuring the patients have been warned. As an argument against full disclosure, this sure seems a stretch, at best.

Other comments focus on how the new law represents offensive government interference. An article in the National Review by Samuel Staley says the new rules “open a door to future regulation of doctor-patient relationships.”6 Again, it seems the opponents need to stretch far to conjure any sort of argument against the regulations, which simply suggest the truth be told. But that said, there are serious potential problems with the legislation. For one thing, can government regulators handle the overwhelming amount of data that is likely to pour in? One “mid-sized” pharmaceutical company has indicated that it expects to report up to one million transactions involving approximately 300,000 physicians in the first year alone. And that’s just one mid-sized company.

But probably, the biggest issue with the Sunshine Act is the giant built-in loophole — not unlike the Super Pac loophole built into campaign contribution limits. Pharmaceutical and medical device companies can simply decide to shift their spending to areas that don’t require disclosure. Instead of trying to influence practicing physicians directly, they may redirect their contributions to the providers of continuing medical education (CME) for physicians and let them do the influencing for them. And those contributions would not be covered by the Sunshine Act. Although currently down from its 2007 peak, industry support of CME still runs close to a billion dollars a year, and it would only take a simple redirect of resources to drive that up considerably.

Even if we assume the best of all possible worlds in which none of the above happens, it may turn out that, in the end, telling the truth might not be enough. We’ve all sat through pharmaceutical commercials that recite a list of gruesome side effects as long as the Gettysburg Address, but the revelations don’t seem to discourage those who take the drugs. In the same way, knowing your doctor has been paid to talk on behalf of your antidepressant might not dissuade you from taking the happy pill. The unfortunate fact is that most of us defer to our doctors, assuming they have far more medical insight than we do. If the doctor prescribes a drug or device, we take the recommendation in good faith to the point where we may well rationalize their commercial bias. The hope is that uncovering the truth about those commercial biases will help consumers make good choices before mindlessly popping prescribed pills. But at the same time, doctors really do need to step up to the plate and manifest integrity, understanding how much faith patients invest in them. 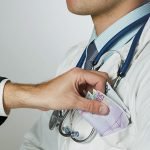