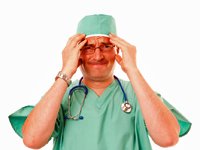 We’ve all had bad days at work.  You know the kind of day during which you have trouble focusing and feel like you just can’t do anything right.  But for most of us, while it might mean being a little less productive than usual, there are no serious consequences.  When you are a medical professional, however, these types of days can potentially mean symptoms missed, incorrect diagnoses, and even loss of life.  And frighteningly, new research has found that many more physicians than previously thought are experiencing this kind of burnout on a regular basis.

The study, conducted at the Mayo Clinic in Rochester, Minnesota, found that work burnout is commonplace among older, more seasoned doctors across a range of specialties.1  Other research has focused on the burnout experienced by medical school students and young doctors putting in long hours during their internships and residencies.2  However, this is the first solid look at the disillusionment faced by physicians who have been on the job for some time.

The scientists examined the answers provided by more than 7,000 doctors to questionnaires about the specifics of their work lives.  Nearly 50 percent of the respondents admitted to a feeling of detachment from patients, emotional exhaustion, or lack of a sense of accomplishment from their jobs.  This information was then compared to the responses of close to 3,500 others employed in non-medical careers.  When all of the pertinent variables were adjusted for, including such factors as the number of hours typically worked and age, the level of burnout was still much higher in doctors.  All of the physicians who participated had been practicing medicine for at least one year, and some have been at it for several decades.

This is a much scarier prospect than even the problems faced by young doctors and doctors-to-be.  At least during medical school and specialty training programs, their work is watched over by a senior, more experienced physician who is there to catch and correct any mistakes made.  Even if that is far from a perfect system to guide these overworked, often exhausted individuals, at least some sort of safety net is in place to help patients.  In this case, it is those very senior doctors themselves who are making mistakes, feeling rushed and harried, and not necessarily caring about their work or their patients.

Plus, it’s not just a few random doctors who may be having some personal issue affecting their judgment or who haven’t adjusted well to the pace of the medical world.  This affected practically 50 percent of the physicians polled!  And the number of hours worked per week didn’t seem to make a difference in the occurrence of burnout.  In fact, the one single influence that determined whether a doctor was feeling burnout was whether they were involved in direct, front-line medicine.  More than half of the respondents who are family practitioners, general internists, and emergency medicine specialists said they were going through burnout to one degree or another. Is it any wonder that so many doctors are addicted to alcohol or dependent on drugs?

A 2012 Careercast report ranked 200 careers best to worst by analyzing stress, danger, salary, physical demands, and hiring outlook.  With all of those factors considered, they placed physicians at number 40.3  But that result was distorted due to their relatively high compensation.  When the researchers broke the findings down, a doctor’s work environment rated 85+, which is extremely high and not good in terms of physical and emotional demands.  The stress level for doctors is elevated as well.

Clearly, the evidence points to physicians having a quite demanding, difficult job, especially when they are seeing dozens of patients every single day.  That’s one more reason to take good care of yourself and keep your health at its best so you can avoid trips to the hospital or even the doctor’s office for a sick visit.  If you do need to go, try to see your doctor first thing in the morning, before delays and the hectic pace of the day cause any rushing.4  And if you feel you are consistently getting the short shrift from any doctor you see, don’t hesitate to switch to another who practices that type of medicine.  Even one who came highly recommended cannot possibly provide the best care if stress and job burnout have begun to set in.