Passing Down a Healthy Lifestyle

Eating well, exercising, and taking care of yourself are undeniably important ways to improve on your overall health.  But the choices you make may not only be affecting you.  A new study has found that the way you live may have a profound influence on your descendents too.

The research, conducted at Stanford University in California, uncovered an interesting connection between good eating habits and a longer life span in not only the consumers of the diet, but their progeny for several generations as well.1  The trial was not performed on human volunteers.  Instead, the scientists looked at roundworms, which have the same kind of proteins as humans — those responsible for holding DNA in place within the nucleus of the cells.  When three of these particular proteins were either modified or blocked, the worm’s lifespan was accordingly changed.  And the worm’s next three generations of offspring — the equivalent of our great-grandchildren — showed the same positive effects with increased life expectancy of up to 30 percent longer than normal, even though nothing directly affected these subsequent worms.  Beyond the third generation, the life expectancies returned to typical lengths.

There were no genetic alterations in the initial subjects, which means that these modifications were inherited in what is known scientifically as an “epigenetic” change. Epigenetics refers to changes in how a gene expresses itself, not in the gene itself. The evolutionary advantage of epigenetics is that they allow for very quick adaptation, as opposed to changes in the actual genes themselves, which can take thousands and thousands of years.  That makes epigentics the perfect tool for responding to changing environmental influences such as sun exposure or pollution levels. In addition, even though epigenetics changes are more transient than actual genetic changes, they are inheritable — at least for several generations.  For example, since the levels of the three proteins in the later generations of worms’ in question had not changed, the longer life spans were determined to be inherited due to the adaptations of the parent worm’s body.

As mentioned earlier, it is through epigenetics that our bodies can “quickly” adapt to environmental factors. In addition to the sunlight and pollution already mentioned, epigenetics help us adapt to things such as exposure to direct or secondhand smoke, medications we take, our internal chemical stress reactions, even our diets. This has been long understood. But what the recent study indicates is that these adaptations may not be just limited to ourselves, but might affect our children and their children as well — for good or ill.

And, in fact, that is very much in keeping with what Francis Pottenger proved with his now famous cats back in the 1930’s.2  Dr. Pottenger experimented with more than 900 cats over a 10-year period.  He fed some groups of the cats a diet of raw meat and raw milk, others received cooked meat and raw milk, and the third segment received cooked meat and cooked milk.  The cats that were consuming 100% cooked food (cooked meat and cooked milk) lost their ability to reproduce after three generations, causing that entire line to die out. Based on what we just learned from the recent study with roundworms, this now makes perfect sense. Whereas bad diet would be unlikely to effect genetic changes in just three generations, it could absolutely induce epigenetic changes that lead to the extinction of the cats.

Could a similar phenomenon be affecting the millions of people today who have trouble conceiving?  After all, it is only within the last few generations that people began to eat such poor, highly-processed types of foods so regularly.  Most of our grandmothers and certainly our great-grandmothers would never have put a bag of fast food on the table and called it dinner.  To be sure, not everything they cooked was necessarily healthy, but it was rarely processed, and almost all vegetables and dairy were consumed fresh.

Recent research has found similar links as well.  A study conducted in Great Britain in 2007 found that a mother’s diet during pregnancy, and even when breastfeeding, can affect her unborn child’s taste for foods.3  Or to state it another way, mothers-to-be who gorge on junk food are more likely to give birth to a child with a sweet tooth, a love of fats, and a craving for salt.  The study indicates that if you expose a child to junk foods in the womb or through their mothers’ milk, then their brains will become hardwired so that they are more likely to eat junk food themselves.

Ultimately, this all proves that we truly are what we eat and that we can pass on much more than blue eyes and freckles.  When you take care of yourself, you are doing the right thing not only yourself, but for all your descendents.  And conversely, when you make poor choices, you are giving your children, grandchildren, and generations beyond a head start…in the wrong direction. 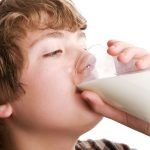