An Overdose of Exercise 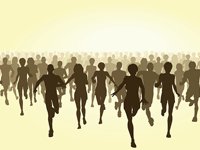 New research that took place at the Mid America Heart Institute of St. Luke’s Hospital in Kansas City, Missouri, found that those who work out in smaller, less strenuous doses may actually have stronger, healthier hearts than their counterparts who go all out participating in endurance athletics.

“Never go to excess, but let moderation be your guide.” –Marcus Tullius Cicero

You try to be good every day, making time for a workout.  Whether you go to the gym, head outdoors, or exercise at home, you may still wonder if you are doing enough.  After all, look at your neighbor who goes into intense training for months at a time to prepare for running a full marathon.  That level of strenuous exercise can sometimes make you feel like your 20-minute jog and weight training circuit are child’s play.

But those with less extreme exercise habits can now take heart (literally and figuratively). New research that took place at the Mid America Heart Institute of St. Luke’s Hospital in Kansas City, Missouri, found that those who work out in smaller, less strenuous exercise doses may be more likely to have healthy hearts in comparison to their counterparts who go all out participating in endurance athletics.1  Such strenuous exercise on a regular basis may lower your body fat and strengthen your muscles, but your cardiovascular system benefits more from less exhaustive types of workouts.

The scientists analyzed both the physical structure of the heart muscle as well as levels of cardiac biomarkers in endurance athletes versus typical exercisers.  They discovered that 12 percent of the approximately 100 marathon-running elite athletes who participated had a scarring or thickening of their cardiac tissue, which can raise the risk of developing an atrial or ventricular arrhythmia.  Arrhythmias are potentially dangerous abnormal heart rhythms that affect the efficiency of the heart.2  That means the marathon runners face three times the arrhythmia risk of those who do not run in marathons.  The endurance athletes were also more likely to have calcium deposits on their artery walls, a risk factor for developing a narrowing of the arteries.

This would seem to corroborate research from last month that found that exercise can actually be harmful to a segment of the population.  That study, which took place at the Pennington Biomedical Research Center of Louisiana State University in Baton Rouge, compared the findings from six different trials with a total of 1,687 volunteers.3  The results appeared to show that for approximately 10 percent of the participants, exercise caused a dip in their cardiovascular health rather than an improvement.  The areas that were negatively affected in this population segment were blood pressure, insulin level, HDL cholesterol, or triglycerides.  In seven percent of the volunteers, more than one of these categories was impacted for the worse.

But none of this means it’s time to throw away your running shoes and start living a life of sloth. Physical activity is essential to your health, and studies have shown that those who regularly work out live an average of five to seven years longer than those who do not.4  It’s just a matter of using exercise to your advantage and not overdoing anything.  If you love running, by all means don’t give it up.  But instead of pushing yourself to run for 15 miles, do a four-mile run instead.  Opt for interval training if you want to add intensity to your workout; these bursts can improve your fitness level without damaging the heart the way continuously taxing workouts may.  Then mix it up and incorporate strength training and flexibility exercises into your routine as well.  Strive for balance and don’t focus on only one of these areas of fitness.  They are all equally important and very beneficial to your body.  A combination of cardiovascular activity, strength training, weight bearing exercise, stretching, resistance breathing, and balance-building routines will cover all of your fitness needs and help you reach and maintain your optimum health for the long term.