Not So Smart Meters? 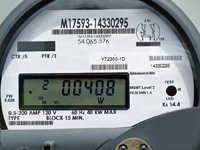 When there’s a way to do things cheaper and boost profits, you can count on industry to discover how. And so, it’s no surprise that the utility companies have figured out a way to spare the cost of sending energy meter readers out to customer’s homes every month. Instead, they’re cutting expenses (and jobs) by relying on devices called “smart meters.” These energy meters track power usage in your home in real time and then send a detailed report directly to the power company via wireless technology.1 Michels, Spencer.  “How Smart are Smart Meters?” 20 July 2012. The Rundown, PBS. 2 January 2013. http://www.pbs.org/newshour/rundown/2012/07/how-smart-are-smart-meters.html The utility company then uses the information to bill you.

At first take, it sounds like a good idea, eliminating those pesky visits from the electric company. One could argue that smart meters are “green” since they eliminate the need to have company reps drive from house to house. In fact, utility companies rave about the green benefits of smart meters. They allow the companies to track and manage energy flows more efficiently, establishing a so-called “green grid” across large areas. They also make it possible to identify outages quickly and efficiently.  Plus, the meters let customers carefully track their own energy consumption so they can figure out where to cut back.

Within the next three years, smart meters will be installed in 65 million homes–half the homes in the US. But not everybody is happy about this. In fact, a number of lawsuits have been filed charging the utility companies with various violations related to smart meters. Opponents say that the meters not only compromise privacy and raise expenses for consumers, but they also pose a dangerous health hazard.

For instance, the benign-seeming Smart Grid Consumer Collaborative, a nonprofit which claims on its website to be dedicated to providing “long-lasting sustainable benefits to consumers” writes, “You would have to be exposed to the radio frequency from a smart meter for 375 years to get a dose equivalent to that of one year of 15-minutes-per-day cell phone use.”3 Bucynski, Beth. “Top 6 Common Myths About Smart Meter Dangers Exposed.” http://www.earthtechling.com/2012/08/top-6-common-myths-about-smart-meter-danger-exposed/ The group asserts that smart meters emit lower levels of radio frequency than cell phones, baby monitors, satellite televisions, and microwaves. This might be reassuring, except for the fact that on closer inspection, it turns out that the Smart Grid Consumer Collaborative has a dazzling array of utility company representatives on its board, rendering its pronouncements a bit suspect.

Opponents say that, in fact, smart meters emit far more radiation than cell phones do–hundreds of times more. The Center for Electrosmog Prevention, a California nonprofit, claims that one smart meter emits radiation equivalent to what you’d get from 160 cell phones.4 http://www.electrosmogprevention.org/public-health-alert/smart-meters-radiation-exposure-up-to-160-times-more-than-cell-phones-hirsch/ The group bases its figures on independent research led by radiation expert Dr. Daniel Hirsh of the University of California San Diego. Dr. Hirsh contends that the utility companies have essentially done some fancy (and faulty) math to arrive at the low emissions figures they tout.

And he’s not alone in his critique. Other independent studies have measured pulses from smart meters up to 1000 times greater than what the typical cell phone puts out. The experts express concern not only about the strength of the signals emanating from smart meters, but also, about the frequency of pulses. They say there’s a notable discrepancy between what industry claims and what independent observers report. While the utility companies say the meters pulse at most once an hour, independent analyses show they can pulse as often as every 30 seconds, blasting out electromagnetic waves each time.

No matter whether the meters emit more or less EMF pollution than cell phones, the real question is how they affect health. Few studies have been done to specifically assess the impact of smart meters over time on human health, so the experts have been relying on cell phone studies, since the technology is similar. As we’ve reported in the past, there’s plenty of independent research raising alarms about the link between cell phones, brain alteration, and cancer, but there’s also plenty of controversy about those results. The establishment chooses to ignore the incriminating research, instead citing industry-funded studies that conclude cell phones are quite safe. In any case, remember that cell phones are held directly against your head; smart meters are not.

Meanwhile, consumer complaints about the smart meters mount. Remember, evidence indicates that smart meters expose you to far more EMFs than cell phones do — although not focused on one part of your body. Nevertheless, there have been numerous reports from consumers suffering from severe headaches, seizures, insomnia, dizziness, palpitations, joint pain, migraines, and tinnitus after extended smart meter exposure. There may be no actual connection, but then again. Meanwhile, the American Academy of Environmental Medicine issued a recommendation in July that “that no Smart Meters be [in the homes of patients with neurological or neurodegenerative diseases, genetic defects, cancer, and other conditions] and that Smart Meters be removed to a reasonable distance from patients’ homes…”5 “Doctor’s Warning: Avoid Smart Meter Radiation.” 14 July 2012. On the Level Blog. 3 January 2013. http://stopsmartmeters.org/2012/07/14/doctors-warning-american-academy-of-environmental-medicine-recommends-patients-avoid-smart-meter-radiation/

While some states allow consumers to opt out and retain their old meters instead of having a new smart meter installed, others do not. And as mentioned above, the complaints about smart meters extend beyond the realm of health. Some consumers fear that utility companies will use the technology to track electronic activity in private households. Because smart meters provide such detailed information, your energy company could, for instance, determine your television viewing choices and patterns, or track your internet usage.6 Doward, Jamie and Mortimer, Caroline. “Energy smart meters are a threat to privacy, says watchdog.” 30 June 2012. The Guardian. 3 January 2013. http://www.guardian.co.uk/environment/2012/jul/01/household-energy-trackers-threat-privacy  Again, there have already been a spate of lawsuits against utility companies charging privacy violations related to smart meters.

No matter how extensive the list of concerns is, smart meters are here to stay for the time being, anyway. As an informed consumer, you should find out if you can opt out when the installation team arrives at your door, in case you wish to exercise that option. Even if the exposure risk is minimal, why risk any exposure at all if you don’t have to? Then again, you can always wear tin foil over your head — just kidding — or put the foil over the meter, which is actually a viable option.