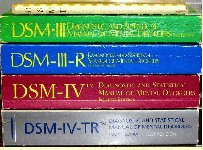 If you find yourself in times of trouble and you decide to talk to a psychotherapist, you’ll sit in the hot seat, spill out your problems, and then at the end, make a payment. But if you intend to use insurance, the process includes another set of steps. The therapist has to decide what’s wrong with you, assign a diagnosis, and then bill the insurance company based on whatever ailment you’ve been assigned. To make that diagnosis, almost all mental health workers–psychiatrists, social workers, and psychologists–consult a book called the Diagnostic and Statistical Manual of Psychiatric Disorders, known by its nickname, the DSM. The book is so widely used in the industry that it’s sometimes called the “Bible of Psychiatry.” Professionals use the DSM not only for insurance purposes, but also to guide medication decisions and to understand and categorize patient symptomology.

Since its first publication in 1952, the DSM has gone through five major revisions.1 Tartakovsky, Margarita. “How the DSM Developed: What You Might Not Know.” PsychCentral. 22 May 2013. http://psychcentral.com/blog/archives/2011/07/02/how-the-dsm-developed-what-you-might-not-know/all/1/ With each successive edition, new mental disorders have been added and old ones routed out–with the overall trend definitely in the direction of adding increasing numbers of psychiatric conditions to the inventory. The first DSM, back in 1952, listed 102 disorders. Back then, schizophrenia was lumped together with manic-depressive disorder under the heading “psychosis.” The latest edition–The DSM-V — just out this week, describes over 300 disorders, including 15 brand new diagnoses. A quick glance through the book would most likely find you a malady that fits your peculiar psyche. It truly makes you wonder how the world survived before psychiatrists identified and codified this myriad of conditions.

Among the new diagnoses, you’ll find “caffeine withdrawal.”2 “15 New Mental Illnesses in the DSM-V.” 22 May 2013. Wall Street Journal Market Watch.” 22 May 2013. http://www.marketwatch.com/story/15-new-mental-illnesses-in-the-dsm-5-2013-05-22?link=MW_latest_news Symptoms include headaches, sleep problems, and mood swings. There’s also “Disruptive mood disregulation disorder,” formerly known as “brat with temper tantrums;” “sleep apnea;” and “hoarding,” described as “persistent difficulty discarding or parting with possessions due to a perceived need to save the items and distress associated with discarding them.” And let us not forget “Binge Eating Disorder,” which describes a disease whereby you pig-out 12 times within three months–certainly something that applies to the typical vacationer or cruise ship patron on a two week jaunt.

There’s been a lot of controversy about the changes in the good book from within the profession. Some find the new designations random and superficial. One disorder that especially raised hackles is “premenstrual dysphoric disorder,” a fancy label for what used to be crudely called “that time of month” or “about to go on the rag.” “PMDD” shares symptoms with PMS, only it’s far worse…at least according to the DSM. Most women will recognize the signs: bloating, depression, despair, and the “I hate my partner and everyone else” syndrome. In other words, what used to be written off as routine premenstrual getting bitchy for a few days now has a full-blown psychiatric designation, and some worry that the label will be used as a pejorative to discriminate against women or as a way for pharmaceutical companies to recycle expensive, side-effect-ridden drugs including antidepressants, pain relievers, and cancer causing birth control pills.

There is some history, too, of peculiar mental illnesses being attributed to women only and then used against them. For instance, female hysteria was first diagnosed by Hippocrates in 2000 BC.3 Taska, Cecilia et al. “Women and Hysteria in the History of Mental Health.” 19 October 2012. Clinical Practice of Epidemiological Mental Health.” 24 May 2013. http://www.ncbi.nlm.nih.gov/pmc/articles/PMC3480686/ The early clinicians thought it had to do with uterine dysfunction. The symptoms included some (but not necessarily all) of these manifestations: anxiety, heightened sexuality, insomnia, headaches, fluid retention, shortness of breath, irritability, screaming, loss of appetite, temporary paralysis, and “a tendency to cause trouble.” In the mid-19th Century, a leading physician claimed one quarter of all women had the condition. While those symptoms do indeed create a colorful picture of nuttiness, one can also see how a woman with a real reason to be angry or who simply went her own way might be slapped with the label.

In the same way, some worry, women now are at risk of being labeled with the premenstrual dysphoric disorder designation simply because they’re crabby. On the other hand, a dear friend who happens to be a psychiatrist assures me that some otherwise agreeable women actually get homicidal or suicidal a few days before menstruation, and that the condition exists and does need to be addressed. The problem is that listing it in the catalog opens the door for misuse. For instance, a vindictive spouse could sue for custody of his children in a divorce contest, claiming his former wife has the disorder. And when you think about it, is PMDD really a different condition than PMS or just more intense PMS? If so, there’s no real dividing line, and any diagnosis is purely arbitrary.

Another new diagnosis in contention is the earlier described “disruptive mood disregulation disorder.” Critics worry that any kid having a normal snit will get labeled and medicated and maybe even assigned to special classes, much like what some say has happened with ADHD. And when it comes to ADHD, it’s worth noting that the U.S. prescribes five times more Ritalin and Adderall to its children than the rest of the world combined.4 “Ritalin: Stimulant for Cancer.” Cancer Prevention Coalition. 2003. (Accessed 24 May 2013.)  http://www.preventcancer.com/patients/children/ritalin.htm Is it any wonder that these are now the illegal drugs of choice among college students and athletes? Make no mistake: words matter. Defining a set of symptoms as a disease matters.

The new edition of the DMS also renames a few golden oldies, including “Asperger’s Syndrome,” which now has been subsumed under the “Autism Spectrum Disorder” heading.5 Gerencher, Kristen. “DSM overhaul stirs controversy.” 22 May 2013. Wall Street Journal Market Watch. 22 May 2013. http://www.marketwatch.com/story/dsm-overhaul-stirs-controversy-2013-05-22?pagenumber=2 In other words, if you had Asperger’s last week, the good news is you no longer have it, but the bad news is you’re now fully autistic. The once acceptable label “mental retardation” now has become “intellectual disability” which certainly sounds more highbrow given that “intellectual” is now part of the appellation. (Makes you wonder if the people who came up with these terms shouldn’t be diagnosed as “clarity challenged.”) “Hypochondriasis” is out and “illness anxiety disorder” is in. And the old “grief reaction” now gets classified as “major depressive disorder”…if you don’t snap out of moping over your loss in a few weeks.

Scientists say that naming psychiatric conditions isn’t an exact science with measurable indicators as is something like “diabetes,” where insulin levels can be determined, or like cancer, where the tumor can be seen on film. Rather, the labels in the DSM describe groups of symptoms that span a wide range, and that may or may not have accompanying physiological manifestations. To some degree, the psychiatric diagnosis assigned relies on the subjective judgment of the therapist, although in some syndromes, like schizophrenia, the manifestations are so severe that there’s bound to be consensus among a wide spectrum of professionals. Other disorders, though, may not be quite as black-and-white. But as far as insurance companies go, a diagnosis is a sure thing, and again, medication gets dispensed according to diagnosis, even for the more nebulous designations.

In a New York Times editorial, Dr. Richard A Friedman says, “Many psychiatrists, myself included, wonder whether we really need a new DSM in the first place.6 Friedman, Richard A. “The Book Stops Here.” 20 May 2013. The New York Times. 24 May 2013. http://www.nytimes.com/2013/05/21/health/the-dsm-5-as-a-guide-not-a-bible.html?_r=0 There is little groundbreaking science that would redefine our diagnostic categories, and some of the changes appear to risk pathologizing everyday human misery.”

But later in the same article, he concludes, “Still, with all its limitations, the DSM at least gives clinicians a common language to describe and treat mental disorders. Until the underlying biology of those disorders can at last be unlocked, that is about the best we can expect.”

In the meantime, if you do need therapy, make sure you stay in communication with your counselor about what label gets assigned to you in your records, especially if you have concerns about that label following you around. Try for something neutral like “Adjustment Disorder,” or find yourself an off-the-radar clinician who won’t label you at all.