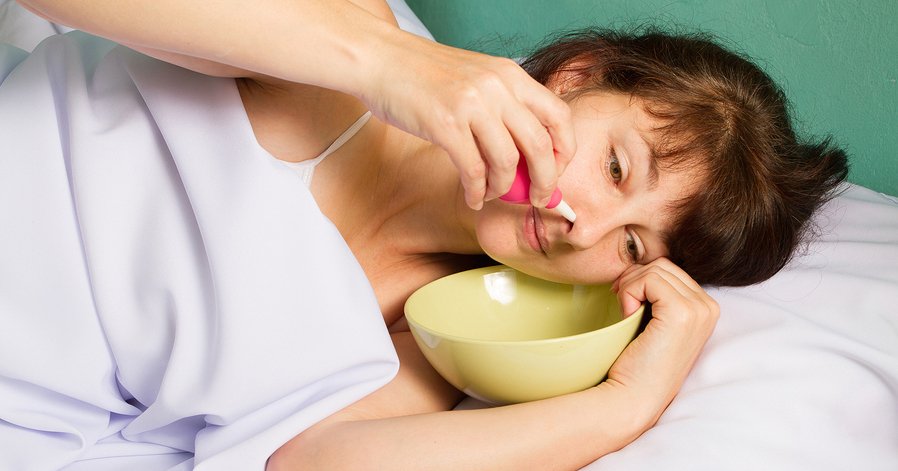 Most of us can recite the names of allergy and sinus medications without thinking: Allegra, Claritin, Benadryl, Neo-Synephrine, Sudafed. For the alternatively inclined, there’s: Hyland’s, Similasan, Sinus Busters, and so on. We recognize these products because when the discomfort of a sinus problem hits, many of us reach for a magic formula to make it go away. Given that about one out of every fiveAmericans suffers from allergies — there’s a whole lot of magic formula being dispensed.

In the US alone, sales of sinus/allergy medications netted $1.1 billion in 2005. The entire respiratory market, including cold medications, yielded $32.4 billion that same year. And unfortunately, according to the Asthma and Allergy Foundation of America, the products do a lousy job. At least a third of allergy sufferers aren’t satisfied with the medication they take because they aren’t getting enough relief, and they aren’t getting relief fast enough.

There is an alternative that in some cases works better, faster, cheaper and safer: nasal flushing. This method, also known as nasal irrigation, refers to a technique of rinsing both nostrils out with a solution — usually water with Kosher, non-iodized salt –that loosens and removes mucous. The solution also soothes irritated membranes, creates an inhospitable environment for bacterial growth and allergens, and can reduce swelling. Although many people know about using nasal flushing for sinusitis, few regularly irrigate to keep seasonal allergies at bay.

To do a nasal wash, you take a cup of very warm (not hot) water, add a teaspoon of salt (again, non-iodized Kosher or pharmaceutical grade). Then you use either a special “Neti Pot,” which looks like a mini-teapot with a long spout — or a measuring cup or squeeze bottle with a spout — and pour half the solution into one nostril, allowing it to exit out the other nostril. This video shows you how to masterfully flush, although I highly recommend that you don’t use a sponge to clean your pot as demonstrated in the video. To prevent the water from running out your mouth, make a “K” sound. Use the other half of the solution in the other nostril, and then lightly blow your nose as needed. Note that some people have luck using a spray bottle instead of the pour method, spraying four ounces of the solution into each nostril.

Even if nasal flushing doesn’t completely alleviate the discomfort of sinusitis, it should ease it. According to Dr. Melissa Pynnonen, co-director of the Michigan Sinus Center, “Nasal irrigation can be considered a first-line treatment for common nasal and sinus symptoms. It’s often more effective than medications.”

The thing is, not only are allergy and sinus medications often ineffective in treating symptoms — they can have side effects ranging from simply annoying to absolutely frightening. Sure, the label may display a warning about drowsiness or dizziness, but the warning doesn’t usually broadcast the fact that (depending on the formula) sinus and allergy meds can cause depression, anxiety, impaired thinking, vaginal dryness and diminished sex drive, increased appetite, insomnia, and infertility. Even the so-called benign second-generation allergy medications such as Claritin and Allegra can have potentially serious side effects, including cardiac irregularities, hypertension, loss of consciousness, jaundice, seizures, and blockage of blood flow to the heart.

Plus, remember that taking allergy or sinus medications treats only the symptoms without curing the problem. This means that your sniffles or sinus pressure can worsen until you develop a full-blown sinus infection, and if that happens, studies show that antibiotics are essentially useless. In a British study published in the Journal of the American Medical Associationlast December, scientists found that antibiotics were no more effective than placebos in curing sinus infections.

Which leads back to the idea that nasal flushing is a great option. Do it early enough and you’ll probably ward off infection. If you get the infection, it will provide relief and create conditions more conducive to healing. And to expedite healing, augment flushing with these preventative measures: