Mutant Seafood in the Gulf of Mexico 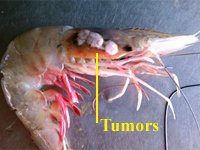 In the mood for a nice, summery shrimp dinner?  Beware of where your seafood came from.  Seriously deformed and mutated fish and crustaceans are regularly being found in the Gulf of Mexico, where the BP Deepwater Horizon oil spill took place two years ago.1  In fact, the oil spill effects have gotten so bad that parts of the coast have now been closed to shrimping entirely.

Interestingly, while initial news reports stated that the halt in shrimping was due to the mutant nature of the recent catches, there has been some backpedaling since then.  Local stations have begun to report that the stoppage is solely due to the size of the shrimp not being adequate.  Now, this wouldn’t be the first time the media jumped on something before it was verified (can anyone remember Al Gore being declared President?), but the fishermen in the area seem to overwhelmingly confirm the first version of events.

BP’s ruptured oil rig pumped close to five million barrels of oil into the Gulf of Mexico, 60 miles off the coast of Louisiana.  While cleanup was necessary, the problems caused by the oil itself were only compounded by the use of toxic chemicals.  These toxins, employed to dissolve the oil, were used in massive quantities, to the tune of close to two million gallons on top of the five million gallon spill.  Is it really any wonder that the seafood is being affected?

The impacted area is enormous — basically throughout the Gulf from northern Florida across Alabama and Mississippi and into Louisiana.  So far, Alabama is the only state to stop commercial fishing in these waters, but those who do their fishing in the coastal waters say mutated fish are appearing all throughout the region.  The anecdotal evidence they offer is horrifying, suggesting that the numbers of shrimp are way down and that more than half of the shrimp that have been caught in the past two years have been seriously deformed.  Many of the deformed shrimp they catch have no eyes, have lesions on their bodies, or tumors on their heads.  And shrimp aren’t the only form of seafood affected.  The fishermen report regularly finding deformed crabs with no eyes, shells that have been softened, absent claws, missing shell spikes, and of abnormally tiny sizes after reaching maturity.

No doubt about it, oil and toxic chemicals on the ocean floor can do a lot of damage to the marine life. One likely culprit for these kinds of mutations is polycyclic aromatic hydrocarbons (PAHs) found in the oil.  This is not the first time that these chemicals are to blame for seriously harming our fish.  Scientists at the National Oceanic and Atmospheric Administration’s Northwest Fisheries Science Center and the West Coast Center for Oceans and Human Health found that the PAHs left floating through the waters of the Pacific after the Exxon Valdez oil spill caused heart defects in herring and pink salmon embryos.  Studies have shown that PAHs slow the heartbeat in fish embryos to such an extent that they lead to heart deformities and fluid buildup around the heart.2

And let’s not forget the two million gallons of helpful chemicals employed to stem the havoc the oil was wreaking.  Among the solvents chosen for this task was a petroleum distillate, a compound of kerosene and petroleum derivatives that often has a high level of benzene.  This extremely carcinogenic product is well known to be toxic to humans, even in small amounts, and is most likely harmful to any living thing that comes into contact with it.  Another disperser used for the cleanup was Corexit 9500, which is made  from 2-butoxy ethanol.  This chemical, which is actually found in many cleaning products and solvents, is considered a carcinogen as well, recommended to be handled with extreme caution.  It can harm the eyes, irritate the nose and throat, cause a variety of gastrointestinal problems as well as headaches and dizziness, and do damage to the kidneys and liver.3  Is it any wonder that the poor, defenseless sea creatures are mutating and dying? We are talking epigenetic changes on a massive scale.

Unfortunately, you won’t be safe from all this mess even if you swear off all seafood forever because harmful elements such as PAHs and 2-butoxy ethanol have seeped into our everyday lives from multiple sources. They’re in the water we drink, the food we eat, and the very air we breathe.4,5  But obviously, concentrations are higher in seafood coming from the Gulf, and are likely to be for years to come. By becoming more aware of the sources of everything you consume, and making sure it is all natural and locally produced, assuming you’re not living on the Gulf coast, you can minimize your exposure to some of the worst potential hazards.  And detoxing your body on a regular basis can help you eliminate what does end up in your system.