The latest brick in the tomb of statins — those cholesterol-regulating meds — comes from a new study confirming that the drugs cause structural damage to muscles. Even worse, the study, published in the Canadian Medical Association Journal, found that muscle damage can continue to progress even after patients stop taking the drugs. As study author Dr. Annette Draeger of the University of Bern, Switzerland, puts it, “Although in clinical practice, the majority of patients with muscle symptoms improve rapidly after cessation of therapy, our findings support that a subgroup of patients appears to be more susceptible to statin-associated myotoxicity, suffering persistent structural injury.”

Scientists have long known that at least 10 to 15 percent of patients taking statins — a class of drugs that includes the widely prescribed Lipitor, Zocol, and Pravachur — develop muscle pain and weakness, and that one out of 50 reports continual or debilitating pain. But the scientists thought they had it under control because they could administer a blood test that determines if structural damage has been done to muscles. That test, which doctors have relied upon, measures levels of an enzyme known as creatine phosphokinase (CPK), which supposedly shows up in the blood after damage to muscles has occurred. If the patient complains of muscle pain but shows no CPK markers in the blood, physicians most likely advise that the benefits of statin therapy outweigh the discomfort of achy muscles and the patient should just buck up and live with it.

But a surprise finding in this study made clear that the CPK test doesn’t necessarily give accurate readings. The researchers took leg muscle tissue biopsies of subjects who were on statins and experiencing muscle pain severe enough to interfere with normal activity. To see if the pains they complained about resulted from actual damage to their muscles, the researchers examined their muscle tissue. They found that half of the statin-taking subjects did indeed show structural damage to muscle fibers.

The finding threw some of the researchers, because in this study, only one patient showed elevated CPK levels, meaning that structural damage was ongoing and progressive for the 50 percent of patients who had “normal” readings on their muscle damage test. Nevertheless, the researchers said that patients taking statins who weren’t in excruciating pain shouldn’t worry and should continue taking the medicine.

The medical community jumped in to defend statins, with numerous commentators pointing out that most people on statins don’t develop muscle pains at all. “Patients on statin therapy who are feeling fine should not worry about muscle damage, and no one should stop treatment without talking to their doctor,” says study co-author Dr. Richard H. Karas of Tufts University. “It is important to point out that we are talking about a minority of a minority of patients taking statins,” chimes in the past president of the American Heart Association, Dr. Sidney Smith. Both physicians do concede that those with long-term debilitating pain should go off the drug.

But the assumption that only a few patients suffer from muscle damage is, according to at least one study, debatable. The study, published in 2006 in the Journal of Pathology, reports that virtually all patients who take statins experience muscle damage, even if they don’t have pain. The researchers, out of the University of Bern, Switzerland, performed muscle tissue biopsies on statin-taking patients and then analyzed the samples using electron microscopy. True, the damage was minimal in most cases, but it was universal. And the fact remains that at least some patients experience severe and lasting muscular degeneration from taking the drug.

The response of the medical community to studies such as the latest one makes it seem that staying on statins is worth the risk of suffering undetected muscle damage for most patients who don’t experience the worst brand of pain. But, as I’ve written before, statins come with a high cost, far beyond the muscular damage they inflict, and they do little good for most people. Among the reported side effects: severe memory loss, nerve damage, trouble talking, nausea, vertigo, and a fifty percent increased risk of cancer.

And the payoff for those risks is — nothing, unless you’ve already suffered a heart attack. While the drugs do lower cholesterol, research shows that they do absolutely nothing to lower your chances of suffering a cardiac event. A large-scale study published last year found that Lipitor prevents only one heart attack per 100 users, and that’s an optimistic figure. A similar study featuring Crestor came up with similar results. I’ve explained at length before that cholesterol does not cause plaque to build up on artery walls, and so it’s not the coronary villain it’s made out to be and lowering it won’t save you from heart attacks.

But the scientific community seems unwilling or unable to look past the $14.5 billion in annual sales that statins deliver, making them the best-selling medications in America. Study after study makes clear that the risks of taking statins outweigh the benefits for most people, and still doctors write out the prescriptions wholesale. The sad fact is that many far safer, less expensive options exist — from supplementing with Omega-3 fatty acids thereby reducing circulating NEFA levels in the blood to using proteolytic enzymes to clear your arteries, reduce systemic inflammation, and repair scarred arterial tissue.

As I’ve written before, a 2006 study found that taking statin medications may add a maximum of 3.5 years of life to those with heart problems, but regular physical exercise adds up to five years. If you’re going to have achy muscles, you might as well get them from enjoying a heart-healthy run around the track, instead of from taking a largely useless, expensive, dangerous medication. And if your doctor insists that you take statins, fire her if she doesn’t also insist that you take CoQ10 with them. Supplementing with CoQ10 has been shown to reduce or prevent many of the muscle related side effects of statins. 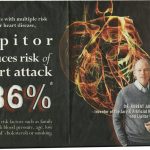