How Does Music Affect Your Mood? | Health Blog 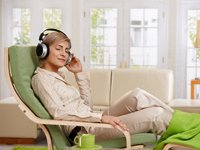 We regularly write about the powerful impact music has on body and mind, and here’s a reprise. Two new studies verify that music can play a powerful role in mood control. The studies come from opposite ends of the spectrum. The first found that uplifting music improves mood, and the second found that sad music comforts people suffering from a broken heart. In other words, there’s room for music of many tones in your collection.

In the first new study, participants set out to deliberately improve their mood using music as an aid.1 Nauert, Rick.” Upbeat Music Helps Improve Mood.” 16 May 2013. PsychCentral. 16 May 2013. http://psychcentral.com/news/2013/05/16/upbeat-music-helps-improve-mood/54898.html The study asked 167 students from the University of Missouri to set their minds to getting happier.2 Abrams, Lindsey. “Study: Happiness Comes Easier With Upbeat Music.” 16 May 2013. The Atlantic. 16 May 2013. http://www.theatlantic.com/health/archive/2013/05/study-happiness-comes-easier-with-upbeat-music/275890/ Then, the students listened either to the dissonant, somber music of Igor Stravinsky’s Rite of Spring for 12 minutes, or to the far more chipper music of Aaron Copland’s “Rodeo.” A control group also listened to “Rodeo,” but without setting the intent to get cheerier.

After listening, the participants rated their happiness level on a scale of 1 to 15. The passive listeners who hadn’t set a goal didn’t improve their mood in spite of the upbeat music, and neither did the Stravinsky contingent. But those who listened to the Copeland composition with intent improved significantly. The same results were found over the long-term. Subjects listened to the upbeat music every day for two weeks during lab sessions, and again the researchers found that those who concentrated on improving overall happiness did indeed achieve that goal compared to the control group.

Earlier studies have shown that music can improve mood, but what’s unique here is the finding that the magic happens more effectively when there’s an intention to improve mood, combined with the right type of music. Both elements are necessary; intention alone won’t work if it’s the wrong music. In fact, an earlier study (2003) in which participants listened to music while trying to get happy had the reverse effect. The subjects felt worse after the music session than they did before. What were they listening to? Stravinsky’s Rites of Spring.

But what if someone feels angry or blue and isn’t ready to get happy? Can joyful music make a difference? In fact, the second study determined that people who suffer from hurt feelings or problems in love respond to music that reflects their sadness rather than to music intended to cheer them up. Apparently, when one has heartache, music takes the place of a friend. Sad music makes the subject feel empathized with, as the music mirrors back the subject’s mood. This raises the question of whether the maxim “misery loves company” plays a role. In other words, if intention matters in terms of how music affects us, is our unconscious intention when we feel heartbreak to commiserate rather than to get lifted out of the doldrums, and does the right music simply amplify that intention?  Then again, Jon Barron talks about a young woman he knew years ago who listened to Joni Mitchell songs for hours on end whenever she felt romantically disappointed. And by the end of a single day, after listening over and over to songs of “circle games” and “urges for going,” she was downright psychotic. Perhaps she’s the proverbial exception that proves the rule. Or perhaps her intention was wrong.

On the other hand, if one feels frustrated because of something non-personal–a car problem, for instance–happy music actually can help, and sad music doesn’t appeal.

Putting all this together, assuming we believe the studies, the picture looks like this. People who want to get happy and who aren’t in bad shape to start with would do well to listen to dance music or something similarly elated while setting a happy intention. Those who are blue from heartbreak should listen to something sad until they feel well enough to flip over to the happy intention routine–with the exception of my Jon Barron’s old acquaintance. And nobody should listen to chaotic, discordant music, unless they don’t care about improving mood.

A few years ago, we reported on a study that found that teens who spent the most time listening to music had an eight times higher chance of being depressed compared to the teens who listened to the least music. Since the study didn’t specify what type of music the kids listened to, we can only assume they listened to typical teen stuff–rap, hip hop, and rock. The question left unanswered is whether hard-edged music, when listened to over time, leads to depression more than other types of music do.

Research looking at how different types of music affect mood differently has found that the best results in mood enhancement come from music specifically designed to affect mood. In one study, 144 subjects listened to either New Age, classical, “designer” (music designed to have specific effects), and grunge rock. After listening to the grunge rock, the subjects had significant increases in fatigue, stress, sadness, and hostility.3 McCraty R., et al. “The effects of different types of music on mood, tension, and mental clarity.” 4 January 1998. Alternative Therapeutic Health Medicine. 16 May 2013. http://www.ncbi.nlm.nih.gov/pubmed/9439023 Sorry, Kurt Cobain! The New Age and classical selections had mixed results, but the designer music did indeed elicit the responses it intended to.

The problem with such studies is that all music within a particular genre isn’t created equal. Just ask Antonio Salieri.4 http://www.youtube.com/watch?v=yIzhAKtEzY0 As the recent research shows, different types of classical music may elicit vastly different responses. The same holds true for New Age and even rock music. A more useful study would look at the specific responses to specific songs or compositions, or even different singers or composers.

In fact, author and neuroscientist Dr. Oliver Sacks, has found that vulnerable people can actually experience seizures in response to a particular musical compositions.5 Sacks, Oliver. “The Power of Music.”Brain. 17 May 2013. http://brain.oxfordjournals.org/content/129/10/2528.full He cites one patient who had epileptic seizures when he heard Frank Sinatra songs, and another who reacted only to Neapolitan songs.

Dr. Sacks has also seen patients who experience swooning, hallucinations, and fits as well as seizures when listening to music. The point he makes is that music has enormous power to affect individuals, and the effects can be negative as well as positive. In other words, music has both “charms to soothe the savage breast” and the power to conjure up “Sympathy for the Devil.”

Studies aside, you can tell how a  piece of music affects you personally just by paying attention. The key here is to pay attention. Do you feel better after listening to a particular CD, or worse? Or to put it another way, you would be wise to choose your music well.