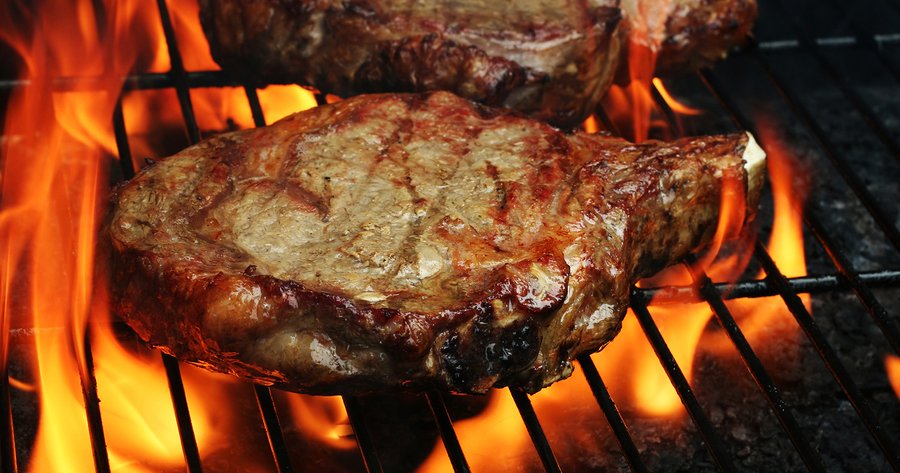 Even vegetarians sometimes admit that the smell of meat cooking on the grill makes them swoon with pleasure (or pain). But that sultry aroma masks the fact that grilled meats are highly carcinogenic, because cooking at high temperatures causes meat to produce compounds called heterocyclic amines (HCA), which have strong links to colorectal, stomach, lung, pancreatic, breast, and prostate cancers. And it’s not just grilling that causes this problem; it’s cooking meat at high heat, whether by broiling, frying, or barbecuing. In fact, cooking in any form at temperatures above 375 degrees F (190.5 degrees C) raises the HCA levels by enormous amounts. One study found a threefold increase in HCA levels when cooking temperature was increased from 392 to 482 Fahrenheit.

And yet, there’s some good news for diehard carnivores who love a cook-out. A new study out of Kansas State University has confirmed that marinating meat sharply reduces the level of HCAs. The researchers marinated steaks in three different types of marinade for an hour each, and then grilled them at 400 degrees, five minutes per side. They also grilled steaks minus the marinade. Amazingly, the steaks marinated in a “Caribbean mixture” containing thyme, red and black pepper, allspice, rosemary, and chives — showed an 88 percent reduction in HCAs. An herb marinade composed of oregano, basil, onion, jalapeno, parsley, and red pepper provided a 72 percent reduction, and a third marinade with paprika, red pepper, oregano, black pepper, garlic, and onion brought a 57 percent reduction.

The mysterious disappearance of HCAs when exposed to sauces most likely comes from the antioxidants in the herbs present in the marinades. All of the marinades contained at least two antioxidant-rich ingredients from the mint family, which includes oregano, thyme, basil, rosemary, sage, savory, marjoram and allspice. In fact, an earlier study out of Kansas State found that adding rosemary to hamburger patties reduced the HCA levels by 30 to 100 percent.

This ties into a study that I wrote about a few weeks ago revealing that antioxidants counteract the negative effects of fatty foods when consumed concurrent with them. In that study, the researchers looked at the effects of eating meat while drinking wine. They discovered that if the wine and meat hit the system at the same time, the antioxidants in the wine went right to work blocking the formation of toxins that would normally be released in the digestive process.

So now meat-eaters have two studies to help them exploit antioxidants to minimize the dangerous effects of eating meat. They can reduce the carcinogens formed in the cooking process by marinating, and then smite some of the remaining carcinogens by swigging wine with the meal. But one word of caution if you opt for the marinade: the cooking process can still release carcinogens. Drips from meat form PAHs, or polycyclic aromatic hydrocarbons, which have carcinogenic properties. Smoke and flare-ups from the drips rise and adhere to the surface of the meat, so even though you’re reducing HCAs with marinades, you still risk being affected by the PAHs formed in the cooking process. (Also, beware gravies made with pan drips, which have a very high level of PAHs.)

If you love meat but hate marinades, or if you’re concerned about the PAH factor, you can stew or boil the meat, which requires only a 212-degree temperature, or roast below 375 degrees Fahrenheit. Throw in a handful of savory herbs, open a bottle of merlot, and enjoy! Or, you can bypass all the worry and simply give up the beef.

Vitamin D: With Meals, or Without?