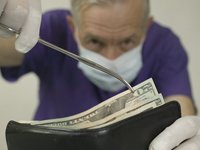 When heart disease develops in a patient, the medical community zooms in with “solutions” faster than vultures attacking a dead skunk. We recently wrote about the fact that stent surgery may be no more helpful than medication for patients with stable angina, although surgeons perform the expensive surgery on at least 400,000 patients each year. That’s in spite of the fact that research shows that two-thirds of such patients who forego the surgery in favor of medication have no further symptoms. Several studies also show that angioplasty surgery to clear blocked arteries, a riskier procedure, also may be no more effective than medication.

But the studies mentioned above all focus on cases where doctors prescribed angioplasty or stent surgery because they ostensibly believed, although perhaps mistakenly, that it was the best form of treatment.  Now, an investigation by The New York Times presents a more insidious, though related story.1 It seems that doctors at one of the largest medical providers in the nation have been routinely and “knowingly” prescribing unnecessary cardiac surgery on relatively healthy patients for years, in order to boost the bottom line. Again, the heart procedures were performed on patients who didn’t even have significant heart disease and could not possibly benefit from the surgery, although they could be harmed…and even die.

The Times reviewed thousands of pages of internal communications and outside evaluations as well as interviews with medical staff at facilities run by HCA, which operates 163 for-profit hospitals and 110 surgery clinics nationwide. The inquiry focused on 10 hospitals, mostly in Florida. According to the Times article, “None of the internal documents reviewed calculate just how many such procedures there were or how many patients might have died or been injured as a result. But the documents suggest that the problems at HCA went beyond a rogue doctor or two.”

The investigation found, for instance, at Lawnwood Regional Medical Center in Fort Pierce, half of the 1200 cardiac catheterizations performed in 2010 were completely unwarranted. Almost half of the angioplasties at another regional hospital also weren’t needed. Apparently, patients did not receive notification that they might have received unnecessary surgery, and even in cases where the hospital concluded that the procedure might have been unwarranted, insurers were not notified or reimbursed. Plus, the Times concluded that the company did not follow up to review patient outcomes in cases of frivolous surgery, but rather, focused on how those procedures affected the hospital’s profitability.

The accusations are horrifying, to say the least. In response, the US Justice Department has launched an investigation of HCA’s possible over-prescription of implantable cardio-defibrillators at 95 hospitals.2 And, the Florida Attorney General’s office is conducting its own review to assess how 10 HCA hospitals, mostly in Florida, made decisions to proceed with invasive cardiac surgery. The company offered a rather weak response on its web page, emphasizing that it’s a matter of debate whether any particular medical procedure is warranted.

Maybe the half-hearted tone of the defense stems from the fact that the worrisome reportage didn’t do much to undermine profitability at HCA’s facilities. In spite of stocks losing almost four percentage points in the wake of the Times story, HCA has seen an overall 12 percent increase in revenue in 2012, mostly because of increased patient admissions.3 And net income rose from $229 million last year to $339 million this year, a huge leap, exceeding projections. Stocks were on the way back up by yesterday, just one day after the story broke.

There’s also the fact that HCA has been down the bumpy road of scandal before and emerged from the scuffle more profitable than ever. In 2000, the company got hit with a bill for $1.7 billion in fines for Medicare fraud. As part of its reparations, the company signed a 97-page “Integrity Agreement” with the federal government, promising to make regular reports through 2008. But that agreement is now four years in the dust, and apparently, the company has returned to its wayward practices.

Some experts blame the “fee-for-service” model: The more procedures the hospitals and doctors perform, the more money they make. In the case of heart surgeries, the temptation to do more is so common that there’s actually a name for the phenomenon: the oculostenic reflex, which refers to an “irresistible temptation” to expand narrowed coronary arteries even when not medically called for.4

But really, the phenomenon of doctors performing superfluous procedures isn’t new. Remember back a bit more than decade ago when the press was filled with the news that 70 percent of all hysterectomies were unwarranted? Nor is the phenomenon confined to HCA facilities. A recent University of Michigan study, for instance, found that 43 percent of all cardiac surgeries performed statewide weren’t needed. And here’s yet another example — from America’s heartland.

The bottom line for you is to do what you can to keep your heart healthy. But if you do find yourself getting doctor’s advice to submit to surgery, get second and third opinions and consider seeing an alternative practitioner to find out if there might be a less invasive alternative.

4 Kliff, Sarah. “Why would hospitals like HCA perform unnecessary surgery? Because it pays.” 7 August 2012. The Washington Post. 07 August 2012. < http://www.washingtonpost.com/blogs/ezra-klein/wp/2012/08/07/why-would-hospitals-like-hca-perform-unnecessary-surgery-because-it-pays/>

Gallery image with caption: Low-dose Aspirin, the Game is Changing

Gallery image with caption: Big Jump in Cholesterol-Lowering Drug Use