Relieving Your Stress, Use a Fake Smile | Natural Health Blog 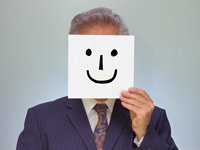 Relieving your stress doesn’t have to a long, on-going process. The best thing to do may well be to just start smiling. Even if it means you have to stick on a fake smile. That’s because new research has found that any smile at all can lower your heart rate and ease your stress.

“The world always looks brighter from behind a smile.” — Author Unknown

It can be easy during our rushed and hectic days to focus on problems at work or home, all the things not accomplished on the to-do list, and other forms of negativity.  When the stress starts to get to you, the best thing to do may well be to just put on a happy face.  Even if it means you have to stick on a fake smile.  That’s because new research has found that any smile at helps by lowering your heart rate and relieving your stress.1

The study, which took place at the University of Kansas in Lawrence, required participants to hold a variety of facial expressions while enduring stress-provoking situations.  The researchers recruited 169 college-age volunteers, of whom half were men and half were women.  They were provided with chopsticks and taught to hold them in their mouths while making certain facial expressions.  They produced a neutral look, a smile that only involved the mouth, and a Duchenne smile,2 which is more of a true smile that requires activity in muscles of both the mouth and the eyes.  To half of the subjects, the suggestion was made that the Duchnenne smile was to be made like a smile.  The other half was simply directed on the muscular movements needed.

All of the participants were told they would be multi-tasking while holding the chopsticks in their mouths and keeping a particular expression on their faces.  But the tasks they needed to perform were designed to be difficult and therefore heighten their stress levels.  For instance, the volunteers were made to trace a star shape using their non-dominant hand working off a mirror reflection or plunging a hand into ice water.

The researchers monitored the heart rates of the subjects both during and after the tasks.  The smilers had lower heart rates than those wearing neutral expressions.  The greatest difference was found in those who executed a Duchenne smile that is most similar to a true smile.  However, even the participants who formed a smile with their mouths only had lower heart rates than those keeping a neutral face, suggesting that any sort of grin–even a completely fake smile–can be beneficial.

We produce greater quantities of both adrenaline and cortisol when undergoing stress.3  This “fight or flight” reaction increases the heart rate and affects blood flow to ensure the vital organs of the core are receiving the lion’s share at the expense of the extremities.  Therefore, having a lower heart rate means we are not feeling or reacting to the stress nearly as much.

According to the results of this study, smiling would appear to have some sort of calming effect.  In fact, blood pressure rates were also noted to be lower in many of the smiling volunteers, but not all.  Since the same hormones in the body that affect heart rate also increase blood pressure, it’s interesting that those results were not as consistent.  The difference could possibly be due to high blood pressure being a long-term condition that develops over time and is affected by overeating and other poor health habits, whereas a quickened heart rate is generally short term.4 Then again, in some people the higher blood pressure could have been the result of hardened arteries, which would not have changed no matter how much you smiled.

Earlier research about smiling has produced mixed results.  A 2011 study at Michigan State University in East Lansing found that people who had to be polite all day at work and produce fake smiles ended up with overall worse moods than others.5  Yet, when those same subjects were told to conjure their smiles based on happy thoughts, both their moods and their productivity levels increased.

If you think about it, there really is no downside to smiling.  Okay, maybe you will develop some laugh lines, but that’s still better than frown lines and furrows between your eyes. Stress is harmful in so many ways to your mental status, physical health, and overall well-being.  A smile may not be able to fix all that is wrong in the world, or even all the problems in your own life, but if it can lower your heart rate and stress level to some extent, it’s certainly a start.  And a smile is a far better choice than taking blood pressure or anti-anxiety medication or developing a stress-induced ailment. also, it’s worth remembering that happiness is contagious.