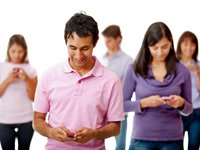 The maxim “more is better” might hold true in some aspects of life, but when it comes to how many Facebook friends you have, it just isn’t so. According to a recent study, the more Facebook followers you have, the more likely that you’ll experience stress as a result.

Here’s the problem. The pressure is on to build Facebook networks into empires. You discover that your colleague has over 1000 people in his Facebook friend network, and you start to worry about the fact that you only have 54 people in yours. And so, you think about who else you can invite so you don’t feel like an online wallflower. You decide to expand your circle of online friends beyond those real-life pals who you hang around with offline. First, you invite family members. In fact, 81 percent of all Facebook users have connected to extended family members online, and 80 percent count siblings among their online friends.1 “Having Facebook Friends is so Stressful.” 26 November 2012. Science 2.0. 29 November 2012. http://www.science20.com/news_articles/having_facebook_friends_so_stressful-97111 Theoretically, this makes for a nice stew of loving comrades in your virtual circle, but in fact, having your mom reading your posts or the posts left by your former drinking buddy might not work out the way you would like.

A study just completed at Edinburgh Napier University in Scotland found that the average Facebook user counts seven different social circles among his or her online friends. In addition to real-life buddies and family members, we connect to colleagues, supervisors, customers, students, teachers, former friends, and friends of friends. The farther flung the circle becomes, the more likely that there will be people lurking on your page who aren’t on the same wavelength. As your friend base extends into various clusters of contacts, you dramatically escalate the possibility that one of your posts will offend somebody–particularly if you post political views, sign petitions, use foul language, or write about your social escapades.

“Facebook used to be like a great party for all your friends where you can dance, drink and flirt,” says study director Dr. Ben Marder.2 “More Facebook friends cause more stress, study claims.”26 November 2012. The Telegraph. 29 November 2012. http://www.telegraph.co.uk/technology/facebook/9703040/More-Facebook-friends-cause-more-stress-study-claims.html “But now with your Mum, Dad and boss there the party becomes an anxious event full of potential social landmines.”

The study found that 55 percent of parents now follow their kids on Facebook. It’s no surprise that trouble results from that dynamic. Interestingly, only one-third of users bother to adjust privacy settings so that they can keep their compromising posts private. Another big stress factor comes from the fact that sixty-five percent of Facebook users friend their colleagues. This doesn’t necessarily work out well when the user posts about the great day she had surfing after calling in sick–and people do such stupid things all the time, forgetting who lurks in their network. By the way, more than half of all employers say they look at Facebook pages and don’t hire people if they don’t like what they see. Yet more trouble comes from the fact that more Facebook users are friends with their ex-partner (64%) than with their current spouse or partner (56%).

People with large Facebook followings report feeling lots of pressure to keep their audience entertained. “It’s like being a mini news channel about yourself,” said Dr. Kathy Charles, who directed a related, earlier study out of the same university. “You are almost a mini celebrity and the bigger the audience the more pressure you feel to produce something about yourself.” In fact, one out of 10 respondents in that survey said Facebook made them anxious, and three out of ten said they felt guilty when they rejected friend requests.

For those with large Facebook networks, there’s an additional stress factor because anything they do in public can become online fodder. People fear having compromising photos of themselves posted by others and then viewed by employers, colleagues, and relatives who they’ve “friended.” The more Facebook friends you have, the greater the chance that someone won’t find that photo of you smashing a martini glass funny. Knowing this, some users report finding it hard to relax in public gatherings and say they now regulate their behavior in public knowing that someone might just decide to feature them in their next online post. It’s as if we’ve all become paparazzi armed with cell phone cameras–and everyone who has a Facebook following is subject to being the focus of unwanted publicity. And we won’t even talk about cyber bullying on social media.

There are other reasons to limit your circle of Facebook friends beyond the stress that comes from trying to keep hundreds of people happy, entertained, and in your good graces. For one thing, high friend counts on Facebook apparently link to Narcissistic Personality Disorder, as measured by a standard psychological test.3 Ngak, Chenda. “Number of Facebook friends linked to narcissism, says study.” 20 March 2012. CBS News. 30 November 2012. http://www.cbsnews.com/8301-501465_162-57401116-501465/number-of-facebook-friends-linked-to-narcissism-says-study/ A study published earlier this year in the journal Personality and Individual found a particular correlation between having lots of Facebook friends and two subscales for narcissism: grandiose exhibitionism and entitlement/exploitiveness. These ugly diagnoses sure make winning the Facebook popularity contest seem like no prize.

Other recent studies have found that the more time users spend on Facebook, the lower their self-esteem tends to be and the less happy they are.4 Walton, Alice. “The True Costs of Facebook Addiction: Low Self-Esteem and Poor Body Image.” 05 April 2012. Forbes. http://www.forbes.com/sites/alicegwalton/2012/04/05/the-true-costs-of-facebook-addiction-low-self-esteem-and-poor-body-image/ One study of 1000 users found that females, in particular, suffered from the effects of too much Facebook time. The women in the study spent about 30 percent more time on Facebook than men did, and added more posts about their emotional state and relationships. (This is more than a little ironic considering Facebooks’ ongoing, “frat boy,” fun house roots.5 Daniel Bates. “A 1950s frat house meets Mad Men.” Mail Online. 27 June 2012. (Accessed 1 Dec 2012.)  http://www.dailymail.co.uk/news/article-2165566/Mark-Zuckerberg-The-sex-sleaze-secrets-Facebooks-little-emperor.html ) The more time they spent on the site, the less satisfied they were with their lives. Also, a related study of 600 participants found that devoted Facebook users tended to feel worse about their appearance compared to nonusers or light users, and were more likely to have a poor body image. In fact, the more time young women spend on Facebook, the greater the likelihood that they’ll develop an eating disorder. Apparently, users look at glamorous photos of their friends and feel that they just don’t measure up.

Dr. Harry Brandt, who directs The Center for Eating Disorders at Sheppard Pratt, says, “Facebook is making it easier for people to spend more time and energy criticizing their own bodies and wishing they looked like someone else…It’s becoming increasingly difficult for people to remove themselves from images and other triggers that promote negative body image, low self-esteem, and may ultimately contribute to eating disorders.”

To paraphrase the old adage, “With friends who make you feel like that, who needs enemies?” Or to put it another way, who needs more Facebook friends when evidence indicates that the more you have, the worse you’ll feel? Actually, when it comes down to it, no one has summed up the zeitgeist  of building social media friend networks better than Demetri Martin did back when Facebook was in its infancy and My Space ruled.