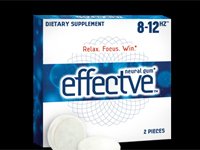 We all know that eating a varied, nutritious diet will help keep us healthy throughout our lives.  But did you know that the actual act of chewing food may help protect us from the mental decline of dementia as we age?  According to new research, those people who retain their full ability to chew solid foods as they reach their golden years are more likely to retain their cognitive functions as well.1

The study took place at the Aging Research Center of the Karolinska Institutet and Karlstad University in Sweden.  The scientists worked with a population of 557 senior citizens who were at least 77 years old.  Through a survey, they assessed which of these volunteers were able to easily consume food of a harder consistency that requires more chewing, such as an apple. Then, the researchers tested their cognitive function through a questionnaire.

The correlation between difficulty chewing and higher rates of dementia was significant–more than twice as likely.  In fact, even when other influences were accounted for, including gender, age, prior mental health status, and education level, the findings were unchanged.  It did not make a difference whether the subject had his or her own natural teeth or some form of dentures or crowns, either.  If a person was able to chew comfortably, the risk of developing dementia was lower.

This is not the first experiment that has linked chewing to brain function.  A study conducted at the University of Kentucky College of Medicine and College of Dentistry, Lexington, found an association between having nine or fewer teeth and a higher risk of developing dementia when compared with those of similar age and background possessing more teeth.2 And, in previous studies, even chewing gum has been shown to improve cognitive function.3

What is it about chewing that influences our mental faculties?  No one is exactly sure, but the chewing motion has been noted to increase the circulation of blood to the brain by as much as 20 percent.4  If you lose your teeth and do not replace them with prosthetics, chewing food becomes much more difficult, resulting in the likelihood that you choose foods that require little chewing.  As the flow of blood to the brain decreases with less chewing, it may open the door to some sort of degeneration or atrophy that causes dementia over time.

Thankfully, if the results of this study are accurate, most of us have the ability to stack the odds in our favor.  Keeping up a routine of good dental hygiene at home, regular oil pulling, a supplement regimen that includes proteolytic enzymes and avocado soy unsaponifiables, and visiting the dentist for regular cleanings should help keep the majority of our teeth intact.  It may also help protect our cardiovascular system, as research from the Boston University School of Medicine and Kanagawa Dental College in Japan has shown.5  If, due to previous bad habits or just an unlucky spin of the genetic wheel, you do experience tooth loss, get fitted for a replacement before structural changes take place to your mouth that may affect your chewing ability.

There is also a plethora of research that has found healthy living in general to be a great combatant against dementia.  Several studies have linked being overweight with impaired brain function, including one earlier this year at Seoul National University Healthcare System in Korea.6  The scientists found that subjects between the ages of 60 and 70 with both high BMIs and a large amount of fat around the midsection scored lower on testing of brain skills.  Smoking is another unhealthy lifestyle factor that has been associated with higher dementia risk.  A 2010 study by researchers at Kaiser Permanente in Oakland, California, and the University of Eastern Finland in Kuopio, determined that those who smoke two packs of cigarettes a day during middle age face a 157 percent increased chance of developing Alzheimer’s disease and a 172 percent greater risk of developing vascular dementia.7

The bottom line is that cutting out destructive habits such as smoking, as well as eating nutritiously and exercising daily will go a long way toward cutting your dementia risk as you age.  Add a good dentist to that list, and hopefully you will get to live out your golden years with all of your cognitive functions as strong as ever.