A piece of seemingly positive news on the health and wellness frontier is that the death rate from cancer in the United States is on its way down.  This trend in the right direction actually began in the early 1990s and has continued slowly and fairly steadily since then. However, before you jump to the conclusion that medical science has made great strides in treating cancer, read on.

According to recent information from the American Cancer Society, cancer-related death rates are 22 percent lower for men and nearly 14 percent lower for women for the time period between 1990 and 2007.1  It should be noted, however, that there is a big discrepancy between the rates of cancer deaths between well-educated, affluent Americans and those adults with the lowest levels of education.  Those with the least education had more than twice the cancer death rate VS their more educated counterparts.

The most pronounced difference was in the death rate from lung cancer, which was five times higher among the least educated citizens than the most educated.  It makes sense when you note the higher rates of both smoking and obesity in those of lower socioeconomic status in the U.S.  Among the population at large, approximately 20 percent of American adults presently smoke.  But when you break it down, only about 10 percent of college graduates smoke, whereas more than 40 percent of those who never completed high school smoke.

Lung cancer has been — and is still expected to be — the type of cancer that kills the most men and women, accounting for approximately 27 percent of all cancer deaths.  The American Cancer Society expects 157,000 fatalities from lung cancer in 2011 alone.  Men’s rates of lung cancer have been declining for decades, due to large numbers of (educated) men quitting the habit.  Women, who in general came to smoking many years after men did, also began quitting many years later, which caused their rates of lung cancer death to remain elevated for more than a decade after men’s began dropping.  The benefits of quitting smoking usually take more than a decade to fully register.

It is important to note that any drop in lung cancer deaths (and the studies indicate that reduced deaths from lung cancer represents the primary improvement in cancer outcomes over the last decade) has nothing at all to do with improved medical care — even though doctors are happy to take credit for it. As we’ve already discussed, it has to do with quitting smoking. And this is especially hypocritical considering that the medical establishment did not take the dangers of smoking seriously for quite some time.  In fact, at one point, doctors actually promoted smoking.  Back just a few decades ago, when the alternative health community was screaming about the dangers of smoking, the medical community was promoting cigarettes as an aid to weight loss.  And it wasn’t just doctors.  The American Medical Association and the American Cancer Society refused to take an anti-smoking position until it was literally forced upon them.  Until 1954, the American Medical Association actually allowed cigarette ads in the Journal of the American Medical Association!2

Another reason for the drop in cancer death rates is that women are no longer on hormone replacement therapy (HRT) regimens in the mass numbers they once were.  Until 2002, doctors regularly prescribed hormones to treat the symptoms of menopause and to “protect” health.  But that year, a large study found that HRT was posing serious health hazards for the very women it was supposed to be helping, and at least some doctors finally began discontinuing its use.  The estrogen-progestin mix prescribed was found to increase the risks of breast cancer, heart disease, stroke, and blood clots, and the estrogen-only version increases the risk of uterine cancer.  Even though there are much safer, more effective ways to relieve menopausal symptoms, there are still no bans on HRT, and it is still regularly prescribed by some physicians. In fact, as Jon Barron states in a recent newsletter, “With more and more medical authorities lining up to say that the risks of HRT outweigh the benefits, you would think that no one would be prescribing it anymore. But you would be wrong. Yes, its use is down 50% from its peak, but according to data from a large, continuous survey of physicians, usage is still high. About 3.1 million doctor visits in the U.S. in 2009 resulted in prescriptions for standard-dose estrogen therapy, alone or in combination with other hormones, according to a study published online in Menopause.”

Nevertheless, a 50% reduction in HRT prescriptions means thousands fewer women getting breast cancer — not because of better medical treatment, but because their doctors are no longer giving them cancer.

So, while it is good news that cancer death rates are down in the United States, it is definitely not for all the right reasons.  We can’t depend on our doctors to “always” steer us in the right direction.  It’s essential to take your health into your own hands, do the necessary research, and don’t believe everything the medical establishment tells you. 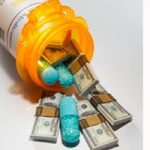 The Compounding Demographics Of Health Care