Understanding The Link Between Cancer & Immunity

Cancer And Your Immune System 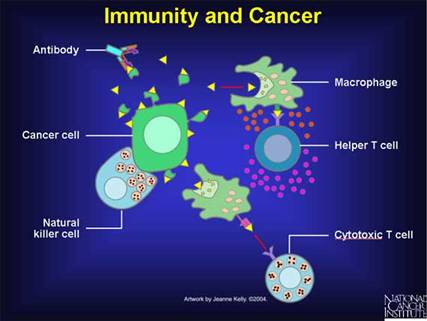 I have maintained for years that cancer is fundamentally a disease of the immune system. It takes root when your exposure to contaminants gets too high, or the strength of your immune system drops too low. And after years of crying in the wilderness (there were actually a few of us), it’s finally nice to get a little confirmation from the medical establishment. In May 2006, the concept of the immune system as the body’s primary natural defense system against cancer reverberated around the world with the release of a story about a mouse — ultimately, surprising researchers and reinforcing my theory.

Part III of an ongoing study titled Transferable anticancer innate immunity in spontaneous regression/complete resistance mice was published in the May 8, 2006, issue of The Proceedings of the National Academy of Sciences (PNAS). This report highlighted the latest in the remarkable ongoing study that started with the discovery of a strain of cancer resistant mouse. These latest results from a Cancer Research Institute (CRI) funded study at Wake Forest University School of Medicine show that this genetic resistance to highly aggressive cancers can be transferred from a strain of cancer-resistant mice into ordinary mice, causing complete destruction of large tumors and life-long protection against future tumor growth. What surprised researchers was the fact that this resistance is based on innate immunity to cancer rather than adaptive immunity (based on T and B cells).

What’s exciting about these results is that the mice outside of the unique cancer resistant gene pool were cured. In fact these studies show that specific types of innate immune cells, such as macrophages, can migrate to the site of cancer in a normal mouse and selectively kill all of the cancer cells without harming normal cells. Not only were the white blood cells able to find the cancer (indicating a signaling relationship) the cancer immunity appeared to last for the lifetime of the injected mice.

What is Transferred Immunity?

Specifically, what was done was that white blood cells from a family of established spontaneous/cancer resistant strain of mice that possessed the unique gene referenced above were injected into normal mice that did not possess this gene in an attempt to transfer this unique immunity to normal mice.

Even when the researchers’ own in vitro (test tube) experiments clearly suggested that the innate immune cells themselves were responsible for tumor killing, these stunned scientists searched for another explanation by performing “challenge experiments”.

Researchers placed cancer cells and immune cells from spontaneous remission/cancer resistant (SR/CR) mice together in a normal mouse to determine whether the cancer cells could survive. Without the SR/CR immune cells, such cancers grow rapidly in normal mice and the mice die in 3-4 weeks.

Results — the tumors were selectively killed! While these results strongly suggested that no other cell type or soluble factor in the mice was required to allow the immune cells to function and kill cancer, researchers continued to challenge this unexpected result.

Researchers injected a normal mouse with cancer cells and allowed the tumor to implant and grow, then injected the SR/CR immune cells at a later time.

Results — the tumors were selectively killed! Still not convinced, the researchers devised a third challenge.

Researchers injected the normal mice with cancer cells at one site (e.g., below the skin on the back), and then later injected the SR/CR immune cells at another site (e.g., into the abdomen). This meant that the injected immune cells would have to migrate to the tumor and kill it at a distant site, all the while being in a normal mouse tissue environment. Researchers injected other mice with similar immune cells from a normal non-resistant strain of mouse to serve as controls.

Results — The SR/CR injected mice showed an initial swelling at the tumor site, a response that researchers felt indicated an influx of active white blood cells into the tumor. Two weeks later, the cancers had completely disappeared. As you might now expect, the control mice showed no tumor shrinkage and eventually died. What was unexpected was that in the SR/CR injected mice tumors never came back even after a period equal to half the mouse life span.

According to researchers, “Activation requires no prior exposure, but rather depends on a pre-determined mechanism to recognize specific patterns on the cancer cell surface.”

What is the Importance of the Study?

While these experiments serve as an example of immunity transfer potential in live human beings, you should know that the donor and recipient mice were both in the same in-bred laboratory strains of mice. Put simply, except for the SR/CR mutation, the mice are genetically identical. This means that the results may be due in part from a suspected inclusion of stem cells in the white blood cell injection. In other words, duplication of these results in biologically unrelated humans might be tricky at best.

The bottom line is that this study strongly supports, right now today, the theory I proposed some years ago that cancer is fundamentally a disease of the immune system — and, by extension, effectively supports the recommendations I made at the same time for preventing and dealing with cancer, if you get it. What do I mean by that?

Why Most People Don’t Get Cancer

Quite simply, in your body, as part of the normal metabolic process, you produce anywhere from a few hundred to as many as 10,000 cancerous cells each and every day of your life. If your immune system is functioning properly, it has the ability to recognize each and every one of those aberrant cells and remove them from your body. The reason that everybody doesn’t get cancer is because their immune systems are designed to prevent it. That’s just what a healthy immune system does. In effect, every one of us starts with a hint of that innate cancer immunity that the special strain of mice demonstrates.

According to the National Cancer Institute’s (NCI)’s description of cancer and immunity, when normal cells turn into cancer cells, some of the antigens on their surface change. These cells, like many body cells, constantly shed bits of protein from their surface into the circulatory system. Often, tumor antigens are among the shed proteins. These shed antigens prompt action from immune defenders, including cytotoxic T cells, natural killer cells, and macrophages.

In Part II of the mouse study cited above, researchers said that this unique mouse (and subsequent offspring) have provided another bit of evidence that immune surveillance is probably a normal process that protects us from developing cancer. In fact, immune surveillance suggests that as cancer cells develop, they are detected by the immune system at a very early stage (perhaps at the stage of a single cell or a few cells) and are then killed and cleared from the body. But again, this happens only if your immune system is functioning properly.

The researchers effectively then restate my premise when they say, “This concept [immune surveillance] implies that we are constantly getting cancer (one cell at a time) but the cancer cells do not survive because our immune systems detect and kill them. But only the cancer cells die; normal cells are unharmed.”

To clearly illustrate that immune cells attack cancer cells, I offer the following picture from the above referenced study in which you can see first hand the immune system at work on cancer cells just hours after the SR/CR injection. 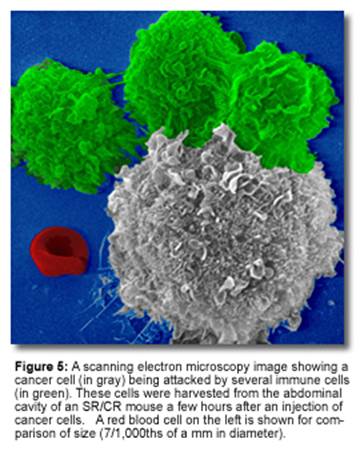 Through their experiences with this unique family of mice, researchers pose the question, “Could it be that we constantly reject cancer cells by immune surveillance throughout our lives and, as we age, that mechanism becomes weaker and weaker, until finally one cancer cell overcomes those controls?” Well, it’s nice to see that even if they are 10 years behind, they’re at least starting to come around to the obvious. But as it turns out, only so far. They still want to turn their understanding of the relationship of the immune system and cancer into a possible future magic bullet — not an immediate means to prevent 90% of all cancers. So let me fill in where the researchers left off.

Why People Get Cancer

People get cancer because one of three things happens (and more often than not all three together):

Again, to repeat the core concept here. Every single day of your life your body produces anywhere from a few hundred to as many as 10,000 cancerous cells as part of it’s normal metabolic processes. That means no one, by definition, is ever cancer free, ever. The difference is whether that cancer takes root and grows, or is destroyed by your immune system. While the option of a mouse inspired miracle immune cell injection may be a future option for humans, it is not an option today. That leaves you only one option available right now: to optimize the immunity you already have.

One lesson we can learn from the mouse study that we can implement today is that it is crucial for you to support the functioning of your body’s ever-aging natural immune surveillance system. That is:

Read more about how to strengthen the immune system with Natural Immune Boosters.