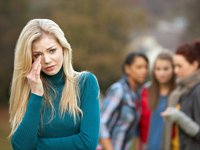 A recent study has found that 92 percent of television episodes on television programming contain instances of “social aggression” suh as social bullying. This translates to an average of 14 bullying incidents in each viewing hour.

Is it art imitating life or life imitating art when the shows on television drawing an audience of preschoolers and elementary school kids regularly feature bullying?  And, according to recent research, the bullying is not being done by some peripheral character who gets a come-uppance in the end.

The study, conducted at Indiana University in Bloomington, found that a whopping 92 percent of the episodes of television shows that were analyzed contained instances of “social aggression.”1 This translates to an average of 14 bullying incidents in each viewing hour.  The 150 episodes were selected from the 50 most popular television shows among children under the age of 12 in 2005.  Included were cartoons such as “SpongeBob Squarepants,” shows with child actors such as “Suite Life of Zack and Cody” and “Hannah Montana,” and family-oriented reality shows such as “American Idol” and “Survivor.”

Mistreatment of others was widespread in every type of show the researchers assessed.  They noticed that verbal abuse was often initiated by attractive females on the shows.  Perhaps that is meant to soften the blow and avoid the stereotype of large male schoolyard bullies in this particular age group.  However, adults are well aware that bullies come in all shapes and sizes and “mean girl” cliques are a cliché for a well-earned reason.  Choosing attractive characters to spout this dialogue may be partially due to the fact that the vast majority of people on television are good looking, but this is also worrisome because attractive people would be more likely to be admired by viewers,2 thus encouraging children to emulate them.

The examples of social bullying counted by the scientists included everything from insult trading between adults to a boss demeaning an employee.  While it is all played for the entertainment value and helps gives viewers a laugh, younger children–particularly those 6 and under–can’t distinguish fiction from reality3 and grow quickly accustomed to this type of behavior.  As with studies of watching violent programming, children become immune to any initial shock value and start to think of bullying as perfectly acceptable.4  In fact, approximately 80 percent of the episodes analyzed contained instances of physical abuse as well.

In an era in which children not only have to worry about how their peers treat them at school or on the bus, but across a wide variety of social media such as Facebook and Twitter as well, no one should be doing anything to promote the idea of bullying among children.  Pre-teens and teenagers consider or commit suicide due the taunts of bullies that they have to face on a daily basis and feel they have no hope of escaping5 — to the point that suicide is the third leading cause of death among teens.6 And for children to be learning that bullying behavior of any kind is not only okay but actually desirable because they are attempting to be like their “role models” on TV is simply appalling. Then again, it’s probably worth noting that some studies shave found that bullying is not so much a learned behavior as it is hardwired into the brain.

In any case, since it is highly unlikely that television programming will change as long as it is making money for studio executives and advertisers, the best way to fight this sort of thing is by being careful about what we say, do, and allow our children to watch at home.  An obvious choice is screening the television shows we allow our children to view, especially when they are very young.

And if they do like a show that has some mean, bullying types, watch with your children and pause the episode to discuss what the characters are doing and how it is wrong.  When we help them understand the negative impact of this behavior–even if it isn’t always shown on TV–we can help them develop their sense of empathy and lessen the chances that our own children will act in the same way.  It might also be beneficial to initiate a dialogue about how other characters could react differently; for example, instead of hanging their head in shame, a character might tell the bully off or a bystander might come to the victim’s defense.  All of these can help teach your children how to react appropriately if they become involved in a bullying incident at some point.  And sadly, that is highly likely these days.