Are Bacon and Diabetes Connected?

Love that side of bacon with your breakfast?  Maybe it’s okay as a once in a while treat, but do it too often and you are tremendously increasing your chances of developing type 2 diabetes.

And it’s not just the bacon that will get you.  Regular consumption of all forms of red meat will make you a candidate for diabetes — at least say the researchers.  A recent study a the Harvard School of Public Health in Boston, Massachusetts, found that even eating small portions of red meat will greatly raise your risk.1

The researchers compared the medical records and reported diets of more than 440,000 adults over the course of between 14 and 28 years.  They discovered that those who ate an average of one 3 ounce serving of unprocessed red meat daily, such as a small pork chop or medium-size hamburger, had a 12 percent higher risk of eventually developing type 2 diabetes.  Those who ate processed meat every day — even if the serving size was less than 2 ounces, such as two slices of bacon or a hot dog — were found to have an increased risk of 32 percent for developing diabetes.

Plenty of earlier research has already established an association between consumption of red meat and diabetes, but this study is one of the largest to do so.  It also differentiates between processed and unprocessed meats as risk factors. (However, it does not differentiate between organic, grass-fed meat and commercial corn-fattened, antibiotic laden, hormone injected meat.)  The typical American adult eats, on average, more than 100 pounds of red meat in a year.  Other studies have shown regular red meat consumption to be related to a multitude of illnesses besides diabetes and higher mortality rates as well.

In the United States alone, 25.6 million people 20 years of age or older have diabetes, which is a staggering 11.3 percent of the population for this age group.  Diabetes attacks virtually every part of the body and can cause heart disease, stroke, high blood pressure, blindness, kidney disease, and nervous system damage.  According to information from the American Diabetes Association, diabetes contributed to more than 230,000 deaths in 2007.

This study shows that all “commercial” red meat consumption increases your odds of developing type 2 diabetes, but that processed meats are more dangerous than unprocessed ones.  That’s not much of a surprise, although it does point to the higher quantities of sodium nitrate preservatives found in processed meats as a worse problem even than the saturated fats and cholesterol present in all red meat. (But again, the study ignored the fact that grass-fed meat has a much healthier ratio of omega-6 to omega-3 fatty acids.)

Occurring naturally in vegetables and fruits, nitrates are added to meats and other foods to maintain color and act as a preservative.  The body converts nitrates to nitrites, and nitrites have a controversial relationship to cancer, with some studies showing a high correlation to cancer, and others showing none.  The National Academy of Science maintains that nitrites are unlikely to cause any kind of cancer,2 but a 2010 Harvard study shows a clear correlation between the intake of sodium and nitrates in processed meats and an increased risk of heart diseases and diabetes.3  And now this latest research confirms the processed meats-diabetes link unequivocally.

Clearly, a daily diet of processed red meat, even in small portions, is not going to do many positive things for your body.  As for the unprocessed variety, until such time as a study comes out exonerating grass-fed beef, you might want to cut back on your consumption of red meat to the 3 ounces a day or less that Jon Barron recommends — and make sure that the meat you do eat is indeed organic, and grass-fed. You also might want to shift some of your meat eating over to organic, free-range poultry or wild-caught, low-mercury seafood.  Choose your meat wisely too. If you’re choosing corn-fed beef, go lean. The leanest cuts are typically sirloin, pork tenderloin, and lamb loin chops. If you’re going grass-fed, the fats are far less problematic.  For more on how to fulfill your protein requirements, check out Jon Barron’s newsletter series on protein.

3 Datz, Todd. “Eating Processed Meats, but Not Unprocessed Red Meats, May Raise Risk of Heart Disease and Diabetes.” Harvard School of Public Health. 17 May 2010.  The President and Fellows of Harvard College. 14 September 2011. <http://www.hsph.harvard.edu/news/press-releases/2010-releases/processed-meats-unprocessed-heart-disease-diabetes.html>. 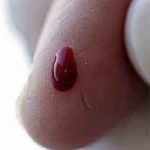