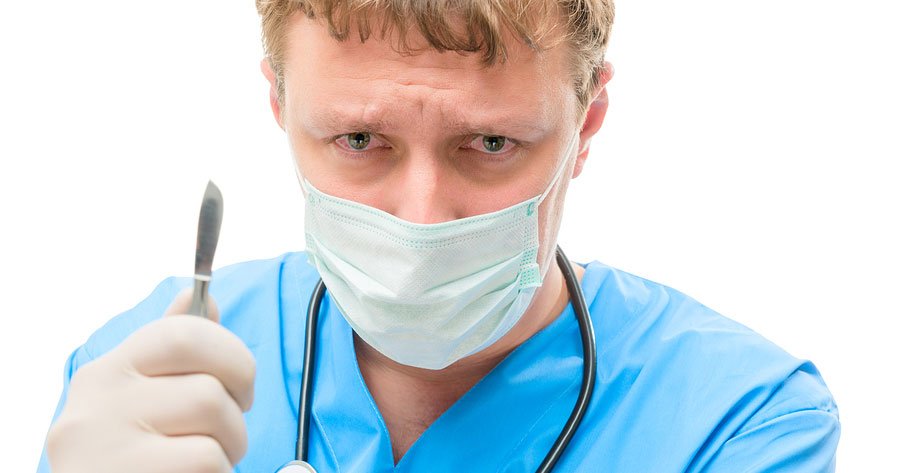 If you feel wary about crossing the threshold of a hospital given the reality that medical error ranks third as a cause of death in the US, here’s something that should scare the living bejeebers out of you should you ever need treatment. A new report just published in the Archives of Surgery says that one out of every six US surgeons has a drinking problem.1 The finding comes from a survey sent out to more than 25,000 surgeons, 7,000 of whom responded. We can only imagine what the drinking problem rate might be among those who never returned the survey — perhaps because they spilled rum on the answer sheet. Logic dictates that the numbers are probably worse among those who chose not to respond — but one in six is terrifying enough.

Naturally, patients who submit to the surgeon’s knife hope that their physicians hold to a high standard — even a higher standard than the general populace, one would hope. Certainly, we pay our doctors well enough to expect no less. But in fact, the alcohol dependence rate among the general population hovers far below that of surgeons. Compared to the 15 percent of well-soused surgeons, only nine percent of the general population abuses or depends on alcohol. Also, it seems that of the physician groups, surgeons have a particular affinity for drinking, as studies indicate that doctors in general have about the same rate of substance abuse as the rest of us.2

Why the elevated drinking rate among surgeons, in particular? The director of the study, Michael Oreskovich of the University of Washington, said, “The nature of the beast is that the percent of emergencies, the percent of after-hours work, and actual scheduled work itself all require an energy and concentration that is really different than a lot of other specialties.” Although drinking may help with the stress of it all, certainly a martini or three won’t help when it comes to the need for concentration and precise hand/eye coordination. And in fact, 77 percent of the 722 surgeons who admitted making a major medical mistake in the past three months did have a drinking issue. That’s a 45 percent higher error rate than among non-drinking physicians.

There’s so much to be horrified about in that reality — not just the rampant drinking while working on patients, but also, the fact that more than 10 percent of the respondents made not just an insignificant boo-boo, but a major medical mistake, and in the previous three months to boot. To make matters worse, Dr. Oreskovich says that the alcohol abuse rate probably is much higher than what got reported in this study. The survey return rate was extremely low, and Dr. Oreskovich believes that may be because many of the surgeons who didn’t return the survey didn’t want to admit to heavy drinking, which is pretty much what I said earlier.

So the moral of this story is that if you need surgery, you’d better hope that the force is with you. That’s especially true if you happen to need surgery in July, the worst month for fatal hospital errors. In July, errors spike by 10 percent. Perhaps the highly stressed interns and residents who predominantly begin their term of service that month are relying on pina coladas to make it through the day. Or maybe your doctor is just suffering from good old fashioned burn out. The bottom line is hope you’re not forced to get surgery in July from a highly stressed alcoholic resident at the end of a 100 hour shift…who’s wondering why he ever decided to go to medical school as he slices open your chest cavity.

On the good news side, those surgeons who engaged in rehab services had very low recidivism rates. But clearly, more surgeons need those services. Better yet, they need to stay off the sauce in the first place, particularly before cutting into human flesh.

You can just hope that if your surgeon has a substance abuse problem, the substance in question is a”smart” drug that improves concentration. Yet another recent study found that sleep-deprived physicians actually performed better surgery when they took a drug called Modafinil, which ostensibly boosts memory and brain power.4  Ritalin probably does something similar, and since we know at least seven percent of physicians have a drug addiction (as opposed to alcohol problem) and that Ritalin is a big favorite, keep your fingers crossed that your doc chose to get stimulated by a brain enhancer rather than sedated by alcohol, that is if he or she must indulge. Better yet, follow the Baseline of Health suggestions, take good care of yourself, and minimize your chances of ever needing surgical services in the first place.