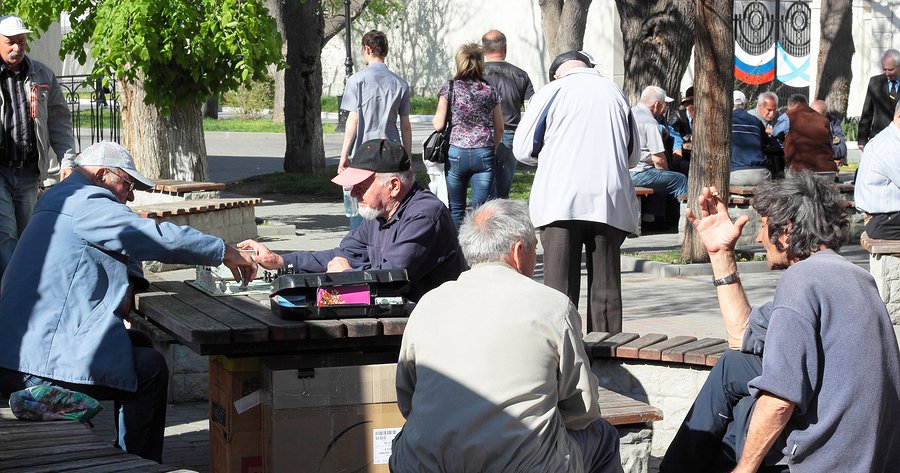 In cities coast to coast, groups of old men gather to trade stories, play chess, and drink coffee for hours on end, taking up prime space in cafes and public places. Meanwhile, gray-haired wives and widows play bridge, discuss books, have lunch gatherings. Well surprise, it turns out that these meetings of the tribe aren’t idle wastes of time, but essential markers and possibly even makers of prolonged life.

A study out of the University of Queensland in Brisbane, Australia, found that people who belong to at least one social group live longer than those who don’t.1 Doyle, Kathryn. “Social groups after retirement may be good for longevity.” 16 February 2016. Reuters. 24 February 2016. http://www.reuters.com/article/us-health-retirement-socializing-idUSKCN0VP2KL The more social groups, in fact, the better. For the purpose of the study, social groups were defined as any gathering of people taking place on a regular basis where participants derive meaning and a sense of identity from attending. In other words, belonging to a book club, a tennis group, a bridge club, a volunteer group, a church group, a lunch bunch–all of these count.

The study followed about 425 adults over age 50 for a period of six years. All took retirement from their jobs during the years of the study. A control group of another 426 didn’t retire during this time either because they weren’t working to begin with or they kept their jobs.2 Steffens, Niklas K. “Social group memberships in retirement are associated with a reduced risk of premature death: evidence from a longitudinal cohort study.” 16 February 2016. Volume 6, issue 2. BMJ Open. 25 February 2016. http://bmjopen.bmj.com/content/6/2/e010164.full?sid=8cb77b19-ec32-4851-ae68-b533dc25294a It turned out that those who belonged to some social group before retirement and who stayed in that group or joined new groups upon retiring outlived those who dropped out. In fact, the results were somewhat astonishing. Those who retained membership in at least two clubs after retirement had a two percent risk of death in the six years post retirement, but if they lost one of their clubs the risk more than doubled to five percent, and if they lost two clubs, the mortality risk skyrocketed to 12 percent, a 600 percent increase.

At work, people typically have plenty of social interaction. In addition to casual interaction at the water cooler and around the lunch table, workers may be part of work teams, labor unions, office clubs, sports teams and so on. After separating from the employer, these identity-defining memberships go away. The result can be extreme distress–a big hole in one’s life and identity, particularly if the person doesn’t have other ongoing memberships to fill the gap. Some retirees were involved in plenty of outside activities before retiring and they maintained those activities; others took on new activities that they now have time to pursue; but some don’t replace the lost avenues of social engagement.  They may think they want to totally unplug and just “relax,” but this is deadly. This study was the first to look specifically at how losing membership in organized social groups after leaving the job affects post-retirement health.

Incidentally, three-quarters of the participants were married, indicating that marital bliss doesn’t replace the need for a rich social life, or more specifically, time spent in groups. As the study authors write, “Group-based interactions have a distinctive role to play in health and well-being over and above social interaction and social contact per se.”

The study also looked at the effects of cutting back on exercise after retirement. Not surprisingly, the researchers found that declining involvement in exercise equals a decline in health, but here’s the shocker. Group membership at least equals exercise in terms of its life-preserving value. As noted above, people who lost several memberships had a 12 percent mortality risk, while those who completely gave up all forms of exercise had only an 11 percent risk.3 Donnelly, Laura. “Being in a book group could boost health as much as exercise.” 15 February 2016. The Telegraph. 25 February 2016. http://www.telegraph.co.uk/journalists/laura-donnelly/12158487/Being-in-a-book-group-could-boost-health-as-much-as-exercise.html In other words, for long life after retirement, it just might be better to sit on your butt playing bridge with the gang every day than to take a daily solo jog around the block. This fact is supported by previous studies showing that the quality of a person’s social relations predicts longevity more accurately than how much they exercise, drink, or even smoke.4 Holt-Lunstad J, Smith TB, Layton JB. “Social relationships and mortality risk: a meta-analytic review.”27 July 2010. PLoS Med. 25 February 2016. http://journals.plos.org/plosmedicine/article?id=10.1371/journal.pmed.1000316 Obviously, the ideal thing would be to both exercise and stay in your groups or, better yet, join a running club and hit the pavement with pals.

Joining clubs may not be everyone’s cup of tea, but it turns out that doing so even in youth may have a life-preserving effect.5 Bennett, Doug. “Joining a club as a teenager may prolong your life.” 7 October 2015. University of Florida. 25 February 2016. http://news.health.ufl.edu/2015/25016/multimedia/health-in-a-heartbeat/joining-a-club-as-a-teenager-may-prolong-your-life/ A large Scottish study found that people who were members of clubs as teenagers lived longer than those who eschewed membership. In fact, by the time subjects reached age 78, a full half of those who had belonged to a club at age 18 were still alive, versus only 31 percent of the club-avoiders.

In short, if you belong to clubs now, stay in them after you retire, or find replacements. Study author Steffens offers some wise counsel. “As people reach the end of their working lives,” he says, “they are typically exposed to a lot of advice about how to plan their finances, medical care, and physical exercise in order to have a long and healthy retirement…One important way for all of us to enhance the health of those who are retired is to support them in their efforts to be part of groups that provide them with a sense of communality and belonging.” In other words, planning for continued participation in meaningful activity with groups of people should be a key component of retirement planning, right along with monitoring your 401k and your heart-rate.