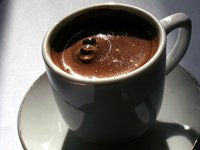 It’s always thrilling when new research discovers that a favorite treat isn’t poison, after all. We’ve learned that chocolate may actually benefit body and soul, red wine is a must-have for a healthy heart, and coffee delivers a plethora of health advantages along with the caffeine buzz. And now, there’s one more pro-coffee study to be pleased about. Investigators from the University of Athens have discovered that coffee can make you live a lot longer, but there’s a catch.1 “Greek coffee may be key to long life.” 18 March 2013. UPI.com. 21 March 2013. http://www.upi.com/Health_News/2013/03/18/Greek-coffee-may-be-key-to-long-life/UPI-56641363664340 The coffee has to be boiled, Greek-style.

The researchers made the discovery while investigating why residents from the Greek island of Ikaria live longer than practically anyone else in the world. The chances of living past the age of 90 on Ikaria beat the rest of Europe by 10 times. Only 0.1 percent of Europeans survive past the 90-year mark, but on Ikaria, a full one percent live that long. Those are still not great odds, but certainly they’re far better than in Lithuania or Italy or Great Britain. Not only that, but the Ikarian old timers live out their 90s in comparatively good health.

After controlling for other factors, the researchers discovered that the one thing that set the Ikarians apart is their habit of drinking a cup of Greek coffee every day. It turns out that 87 percent of the study participants–a total of 142 individuals over the age of 65–drink a daily cup of Greek coffee. Greek coffee, it seems, is a far cry from Starbuck’s latte. The brew has to be boiled for a while in a special pot that makes the steam rise to the top. The subjects who drank other types of coffee didn’t get the longevity boost.

If you want to reap the benefits of Greek coffee yourself, you can either hop a plane to Ikaria or concoct your own brew at home. You need to find Greek coffee, which is very finely ground, and then locate a special Greek coffee pot, known as a briki. It’s a tall, narrow thing that forces foam to form at the top. The secret, it seems, is to boil the elixir long enough for the foam to get thick. The coffee is not strained, so the cup begins with the grounds floating on top, and then they slowly settle to the bottom.

Merely brewing the perfect cup may not be enough to impart the medicinal effects, though. You also may need to sip the brew Icarian style in order to reap the medicinal effects. Unlike the typical grab-a-cup-and-gulp approach so common in the US, the Greek coffee ritual involves extremely slow sipping, with one cup typically lasting a few hours.

You may wonder if there’s something about living in a culture that promotes two-hour coffee breaks that contributes to the longevity factor, and that’s certainly a possibility. On the other hand, the coffee itself just may possess some magic.

Study director Dr. Gerasismos Siasos says, “Boiled Greek type of coffee, which is rich in polyphenols and antioxidants and contains only a moderate amount of caffeine, seems to gather benefits compared to other coffee beverages.” The research did not contain a comparison of the nutrients in Greek coffee compared to other blends, but perhaps boiling it and capturing the steam enhances the delivery of those antioxidants and polyphenols.

That said, even regular coffee seems to have benefits. A few years ago we reported research indicating that coffee offers protection against stroke. Other recent research concludes that coffee protects against Type II Diabetes, irregular heart rhythm, Alzheimer’s Disease, respiratory disease, and liver cancer.2 “Coffee and Your Health.” WebMD. 21 March 2013. http://www.webmd.com/food-recipes/features/coffee-new-health-food?page=3 And another study, this one of 400,000 individuals, also found that those who drank a few cups of coffee daily got a 10 percent longevity boost.3 Szabo, Liz. “Coffee drinkers may live longer, study suggests.” 17 May 2012. USA Today, 22 March 2013. http://usatoday30.usatoday.com/news/health/story/2012-05-11/coffee-drinkers-longer-life-expectancy/55024636/1

Coffee does, of course, raise the risk of hypertension in the short run, and it can also raise cholesterol. Plus, it can cause insomnia and nervousness. But overall, the recent coffee news points to benefits rather than dangers.

Here’s the ironic twist. Now that coffee has become a good guy in the annals of nutrition, it turns out that it’s in danger of extinction. Climate change experts predict massive reduction in land suitable for growing the preferred Arabica type of coffee by the year 2080.4 “Coffee beans in danger of extinction.” 10 November 2012. CBC News. 22 March 2013. http://www.cbc.ca/news/technology/story/2012/11/09/coffee-arabica-extinct.html Arabica is by far the most common type of coffee bean, comprising about 70 percent of the coffee in production. Unfortunately, the beans are extremely vulnerable to variations in weather. According to the experts, Arabica coffee output will decline by 90 to 100 percent over the next 70 years at the current rate of change in growing conditions. Even the most conservative estimates put the reduction at about 38 percent, and that assumes a halt to deforestation in South Sudan and Ethiopia. Apparently, there is another type of bean, Robusta, that’s more tolerant of climate change and easier to grow, but it produces an inferior coffee, bitter and harsh.

In short, it looks like our great grandchildren may never get to enjoy a smooth cup of cappuccino unless it’s produced by GMO beans. But who knows what the future will bring. Maybe by the year 2080, cigarettes and saturated fat will be the new health foods, as predicted by Woody Allen in Sleeper.5 http://www.youtube.com/watch?v=D2fYguIX17Q Just kidding! In any event, you might as well celebrate your ability to make coffee from choice beans while you can and maybe even try a cup Greek-style, along with the two-hour sipping ritual.   And as a final note, it’s actually quite interesting when you think about it. Greek foods have come out of nowhere to become the latest trend in health foods. For the last couple of years, Greek yogurt has been all the rage, and now it appears Greek coffee is getting ready to follow in its footsteps. Now if only the Greek economy could catch fire too.