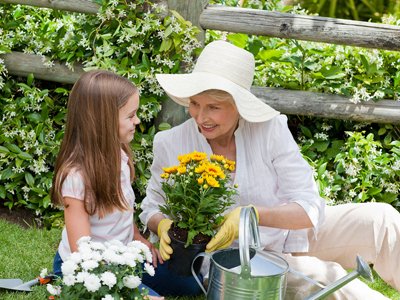 “I’ve been a godmother loads of times, but being a grandmother is better than anything.” –Vivien Leigh

Being a parent is a tough job. You are on call 24 hours a day, every day, trying to raise your children to become good, responsible, independent people. Some say the reward for all that hard work is becoming a grandparent, as that is the time you get to enjoy having fun with the little ones without all of the day-to-day tantrums and tears. Proud grandmothers everywhere brag to anyone who will listen about their amazing grandkids, and anxiously await the next visit. And now, new research shows that it’s important to keep those visits coming often, since it appears that women who regularly spend time with their grandchildren may retain the sharpest mental skills.

The study, which was part of the Women’s Healthy Aging Project in Australia, found that post-menopausal grandmothers who help care for their grandkids have a lower likelihood of developing disorders that affect memory or cognitive ability, such as dementia.1 Firger, Jessica. “Grandma’s brain benefits from time with the little ones.” CBS News. 9 April 2014. Accessed 16 April 2014. http://www.cbsnews.com/news/grandmas-brain-benefits-grandchildren-cognition/. The subjects were 186 women, ranging in age from 57 to 68, all of whom had gone through menopause. Nearly two-thirds of the women had grandchildren. Each of the participants completed three mental assessment tests that measured their cognitive abilities.

The volunteers who typically spent one day a week caring for their grandchildren achieved the highest scores on the tests. However, according to the study, there was definitely a limit to the amount of childcare a grandmother should provide. Those women who spent at least five days a week as the caregiver for their grandkids actually had much lower test scores than did their peers who were with their grandchildren only one time a week. It also isn’t necessarily good for the children either as studies have shown that kids raised by their grandparents tend to be fatter.

It is not completely clear as to why spending five days or more with the grandkids would backfire and be associated with lower cognitive function. More of those grandmothers reported that their children–the parents of the offspring they were watching–placed too many demands on their time. It’s possible that these feelings of being stressed out from the responsibilities of child rearing as well as being stretched too thin to make time for themselves could lead to some decline in the brain’s performance. A 2013 study at Ruhr University Bochum in Germany found that women who were experiencing even mild forms of emotional or situational stress required 10 percent longer to remember information they had recently acquired.2 Schoofs, Daniela; et al. “Working memory is differentially affected by stress in men and women.” Behavioural Brain Research. 15 March 2013. Accessed 17 April 2014. http://www.sciencedirect.com/science/article/pii/S0166432812007784

But it is not such a surprise to find that spending time with the kids every week would be good for the grandmother’s brains–and most likely for grandfathers too, had they been included in the experiment. A 2011 study at Rush University Medical Center in Chicago, Illinois, determined that the senior citizens who stay the most involved with others socially have much less cognitive decline than do their contemporaries who spend very little time socializing.3 James, Bryan D.; et al. “Late-Life Social Activity and Cognitive Decline in Old Age.” Journal of the International Neuropsychological Society. November 2011. Accessed 17 April 2014. http://www.ncbi.nlm.nih.gov/pmc/articles/PMC3206295

So what do you do if the grandkids live far away and you can’t possibly see them on a regular basis? There may be some hope, if you are just a little bit technologically savvy. A 2014 report from the Pew Research Internet Project stated that 46 percent of senior citizens who use the Internet frequent social media sites, which promotes stronger, more consistent connections with loved ones at a geographical distance.4 Smith, Aaron. “Older Adults and Technology Use.” Pew Research Internet Project. 3 April 2014. Accessed 18 April 2014. http://www.pewinternet.org/2014/04/03/older-adults-and-technology-use Plus, options such as Skype or FaceTime allow you to see the people you are talking to, helping everyone stay engaged.

And for those who do not have any grandchildren to help care for, there’s really no reason your social involvements have to revolve around children or relatives. Volunteering for a cause that matters to you, becoming involved in your local house of worship, taking some classes at the local senior center, or starting a standing date with friends to play cards would likely all have the same positive impact on your brain, as well as on your happiness. Studies have shown that regular social interaction of any kind can help ward of dementia.