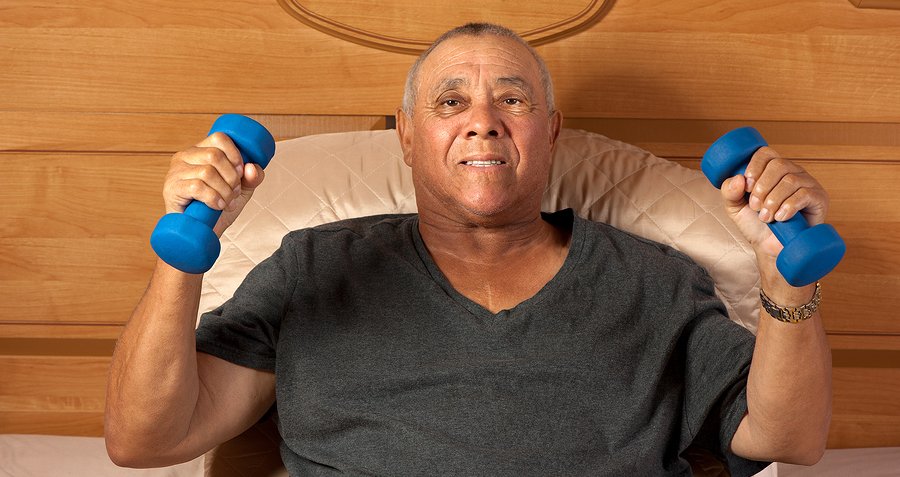 As we get older, our bodies often become gradually weaker over time. We may lose muscle mass and our bones are not as strong as they once were. If left unchecked, this kind of slow decline can leave the body in a frail state by the time a person reaches their 70s or 80s. But it is important to do everything we can to prevent it. Not only does frailty leave you less able to perform daily physical activities, but new research shows it is associated with cognitive problems as well.

The study, which took place at Dalhousie University in Halifax, Canada, found that frailty is a risk factor for Alzheimer’s disease and may produce a more pronounced expression of its symptoms.1Wallace, Lindsay M.K.; et al. “Investigation of frailty as a moderator of the relationship between neuropathology and dementia in Alzheimer’s disease: a cross-sectional analysis of data from the Rush Memory and Aging Project.” The Lancet Neurology. 1 February 2019. Accessed 27 January 2019. http://www.thelancet.com/journals/laneur/article/PIIS1474-4422(18)30371-5/fulltext. These results are based on an investigation that included 456 men and women residing in Illinois. As the research began, all the subjects were 59 or older and were not displaying any signs of Alzheimer’s disease.

Each of the participants had a yearly evaluation that included tests of both mental and physical health. In addition, the brains of any volunteers who died during the study period were examined. The physical evaluations included assessing each person in 41 different areas on a frailty index created by the investigators, which consisted of issues such as joint disease, fatigue, heart problems, loss of mobility, osteoporosis, and trouble preparing meals for themselves.

By the final evaluation of the study, 53 percent of the subjects had received a diagnosis of possible or probable Alzheimer’s disease. These types of qualified diagnoses are not uncommon in people who develop some memory or cognition difficulties. Possible Alzheimer’s typically refers to a patient with memory problems but for whom other potential causes (prescription drugs, for example) haven’t been ruled out, and probable Alzheimer’s refers to those cases in which no other cause has been identified.

Of the full group of study participants, eight percent were found to have substantial changes to their brains related to Alzheimer’s disease, yet had no diagnosis of the condition. Another 11 percent had a diagnosis of Alzheimer’s but very few brain changes related to the disease. However, the volunteers who scored higher on the measurements of frailty were more likely to have both brain alterations related to Alzheimer’s and symptoms of the disease. Interestingly, the subjects who had considerable changes within their brains but weren’t frail were much less likely to have symptoms of Alzheimer’s disease.

The researchers controlled for an array of potentially influential factors, including age, gender, and education level, and determined that frailty is an independent risk factor for the development of Alzheimer’s disease. The study was not designed to prove cause and effect, so we cannot say from the outcomes that frailty is a direct contributor to the condition, only that a link has been uncovered.

What’s more, a clear connection was established between frailty and brain changes associated with Alzheimer’s disease once the investigators removed daily living tasks from the frailty index and controlled for health-related issues like heart failure, diabetes, stroke, and hypertension. This suggests that frailty is likely one of several factors that contribute to dementia.

Ultimately, this serves as a good reminder to take care of ourselves at every age to help prevent degenerative conditions such as Alzheimer’s disease as we get older. Frailty can be avoided with a comprehensive daily exercise routine. This should include an aerobic workout to maximize heart health and keep weight in the normal range, a strength-training workout focused on maintaining lean muscle mass, and a stretching and flexibility workout that keeps the body limber, as well as exercises to improve balance and rebuild lung capacity. As an added bonus, physical activity was shown in a 2011 study at the University of Illinois at Urbana-Champaign to increase brain mass in an area of the brain essential to memory. So get up and get moving to maximize your brain health.

And let’s remember what Jon Barron said in Lessons from the Miracle Doctors:

“Be sure and check with your doctor before starting any exercise program. But keep in mind, anyone can exercise. If all you can do is hobble around the bed using a walker, you can start with one trip around the bed the first day, two the next, three the third, and so on. If you’re confined to bed or a wheelchair, work your upper body. Extend your limits. Move or die.”